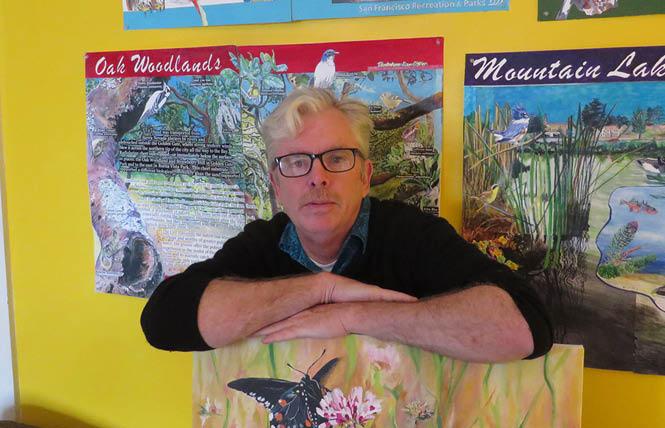 Liam O'Brien sits in his living room, which features his paintings of butterflies grouped according to their natural habitats in the Bay Area. Photo: Charlie Wagner

Fiery Skipper, Gray Hairstreak, and Western Pygmy Blue may not be familiar names to many urban dwellers, even those living near the Presidio National Park.

All are butterflies native to Crissy Field and all are the passion of Liam O'Brien, 57, the writer and illustrator of the new Flying Pansy column that was published October 3 in the new online magazine Bay Nature. The column will be published monthly.

The self-taught lepidopterist (person who studies butterflies) and former actor chose to proclaim not only his sexual orientation, via the column's name, but also his HIV-positive status in a remarkably candid essay titled "On Butterflies, Parasites and Viruses."

In a field where O'Brien has noticed most of his fellow lepidopterists are "old straight guys," his column is unique. Feedback to his column has been phenomenal, he said. Some saluted how "he was connected to nature in an exalted way," though he admitted, "I've never thought about it like that."

The butterfly chapter of his life began about a year later after his HIV diagnosis in October 1998. O'Brien was living in the Duboce Triangle neighborhood of San Francisco. He saw a Western Tiger Swallowtail fly into his yard and feed from a fuchsia flower.

"I ran back upstairs and got some paper and started sketching — something I hadn't done in many years," he wrote in his column. O'Brien acknowledged he had no formal education in art, but his innate talent attracted the notice of the butterfly community.

His watercolors were soon published in print magazines such as Bay Nature and American Butterfly as well as in publications of the San Francisco Recreation and Park Department.

In 2010, he was commissioned by the Presidio Trust to provide all the illustrations for its book titled "Butterflies of the Presidio."

O'Brien began his working life as an actor after studying theater in college for two years. A union member by age 22, he enjoyed many aspects of his drama career.

"Coming out was not a big deal in the theater," he offered as one example.

His first big success was in the play, "Sharon and Billy" at San Francisco's Magic Theatre in 1986.

"I fell in love with the playwright Alan Bowne and wanted to bring him home to dinner," he recalled. "That was how I came out to my family." (Bowne, who wrote "Sharon and Billy," died in 1989.)

However, by the time of his HIV diagnosis, he was deriving less and less fulfillment from his booming career. "I did it every night from age 12 to 35," he said, "and that world just ran its course."

Noting how the health crisis emerged well before he started living as an openly gay man, "I never did not have AIDS in my life," he said. "I was very familiar with the arc of the disease, as I had played Pryor in an ACT production of 'Angels in America' in 1995."

"I was diagnosed just at the time AIDS was changing from a death sentence to a chronic illness," O'Brien said, which today he considers a small bit of luck.

His acting experience and comfort with public speaking enabled him at one point even to lecture medical students at UCSF about the disease. Now O'Brien is equally determined to educate the public about butterflies.

"Butterflies do not pollinate, but they are an important food source," he explained. "Eighty percent of their eggs are eaten, then 80 percent of the caterpillars (larvae) are fatally parasitized by flies and wasps, then in their adult (butterfly) phase, 80 percent are eaten by birds and spiders."

While expressing an impulse to "crowbar some of the emotion" from butterflies, O'Brien quickly added, "I don't want to suggest you're not allowed to love the beauty of butterflies, because I do."

Robert Pyle is the founder of the Xerces Society for Invertebrate Conservation, named after the Xerces Blue butterfly, once native to the coastal sand dunes of San Francisco's Sunset district, but last seen in 1946 at the Veterans Hospital in Lincoln Park. Many consider it the first butterfly driven to extinction by humans.

O'Brien himself considers the reestablishment of San Francisco's Green Hairstreak Butterfly Corridor, extending from Hawk Hill in the Forest Hill neighborhood to the tiny 15th Avenue Steps Park in the Sunset, as one of his biggest successes in life.

"We missed the ball on Xerces Blue," O'Brien lamented, "so I want to be part of the group to try to save this wildlife."

The Butterfly Corridor project started while O'Brien was working on a San Francisco butterfly survey in 2007. After he met people at SF Rec and Parks who were also interested in butterflies, he was off and running.

O'Brien, who has coordinated the city's annual butterfly count since 2007.

He said the profusion of non-native plants in San Francisco is more threatening to butterflies than even pesticides.

"The Green Hairstreak only lays eggs on one plant," he pointed out.

In his first Flying Pansy column, O'Brien revealed a journal entry he made at the time of his HIV diagnosis: "As the virus progresses, I hope it can't get to my spirit." Reflecting on this recently, he described the emotions behind this statement as "a feeble attempt to deal with my fear."

In the column, O'Brien celebrates what he's discovered in the last 20 years with these words: "The virus gave me ... butterflies."

And in an interview he declared, "I still find butterflies absolutely enthralling."

O'Brien enjoys meeting other LGBTQ people who share his interest in nature and butterflies. His art and photography can be viewed on Instagram at www.instagram.com/robber_fly. He uses and recommends the iNaturalist crowd-sourcing app owned by the California Academy of Sciences.