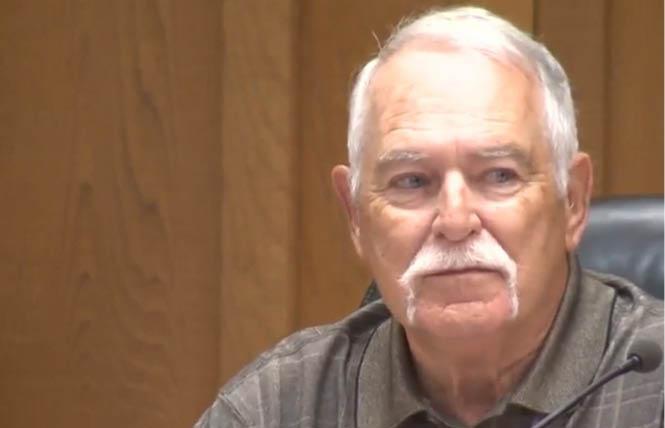 The anti-LGBT vice mayor of Dixon, California, who faced national backlash for his anti-gay column that called for a "Straight Pride American Month," lost his bid for re-election to the Dixon City Council last week by a significant margin.

Ted Hickman was defeated by Jim Ernst, a city planning commissioner who got 72 percent of the vote, with all ballots counted.

The City Council of the small town west of Sacramento cited First Amendment rights in its decision to allow the vice mayor to remain in his post at the time of the controversy, according to the Sacramento Bee.

At a July City Council meeting, however, Dixon Mayor Thom Bogue called for a resolution to be added to the council's next agenda stating it does not support what Hickman wrote, according to former Dixon city councilman Michael Ceremello, who was at the meeting.

"I absolutely believe that Hickman's comments significantly influenced the outcome of the election. He unapologetically made the hateful comments, defended them when confronted, and refused to step down despite the hundreds of people who came out to the meetings to speak in support of the LGBTQ community and demand his resignation," Heitstuman wrote in an email statement to the B.A.R. "Dixon is not unlike my own home town and I was proud to see folks take ownership in the value of inclusivity that they wished to see in their community. While residents were barred from initiating an immediate recall, they certainly exercised their right at the ballot box to ensure their community would no longer be represented by such bigotry."

California's largest LGBT rights organization, Equality California, said in a statement to the B.A.R last week, "We know that anti-LGBTQ extremism is not a winning platform — as voters across the country rejected fear and division at the ballot box on Tuesday. The City Council race in Dixon was no different. We hope Mr. Hickman — and all anti-LGBTQ candidates — got the message."

Portland's Powell's Books hit with bias complaints
Powell's Books in Portland, Oregon is known for inclusion and being a champion of LGBT civil rights, but recently it has been called out by one of its gender-neutral corporate employees who has claimed discrimination.

According to Willamette Week, Zee Brewer filed a complaint against Powell's Books with the U.S. Equal Employment Opportunity Commission in August and filed a second complaint with the Oregon Bureau of Labor and Industries this month.

In the cases, which were provided to the local paper, Brewer alleged that the company discriminated against them because of their gender-neutral identity, created a toxic work environment, and retaliated when they complained. Brewer, the EEOC, and OBLI have not responded to requests for comment from the Bay Area Reporter.

"It got to the point where I tried to drink less water," Brewer told the paper, "so I wouldn't have to race the clock to the restroom."

The bookstore eventually created a gender-neutral bathroom in Brewer's office three months after they were hired. However, their various other complaints, which continued after the bathroom issue, included employees avoiding them due to fear of misgendering.

In August, Brewer's all-female team held a "ladies lunch," to which Brewer was not invited. Brewer also has accused Powell's of asking to verify their HIV status after they submitted a doctor's note to the human resources department. This is a violation of federal workplace laws, they said.

After the 37-year-old complained to the company's HR department, it opened multiple investigations, but all concluded that the company did not discriminate, according to the newspaper.

"It makes me feel just immense sadness," Brewer told the paper. "They do one thing and say another. I felt like a problem, just a problem you ignore and hope that it goes away."

Throughout its decades-old history, the bookstore has been an ally to the LGBT community, celebrating June Pride Month by hosting LGBT authors. Basic Rights Oregon, the state's largest LGBT advocacy organization, told Willamette Week that the bookstore supported it during ballot measure campaigns in the 1990s and 2000s.

Powell's and Basic Rights Oregon did not respond to requests for comment.

San Mateo grant to fund LGBT stigma awareness survey
The San Mateo County Pride Center was awarded a grant from Kaiser Permanente to help combat stigma faced by LGBT members suffering from mental illness. The grant is $90,000 annually for three years. As part of this, the center is asking LGBT members to take a survey to help it collect data surrounding mental illness stigma.

Kaiser, the nation's largest integrated health system, launched a national effort to reduce stigma and increase public understanding of mental health as part of overall health. As part of this campaign, they have funded collaborations with local community organizations including the San Mateo Pride center.

A small portion of the grant is dedicated to collecting data through the survey.

"The Kaiser grant was awarded to the SMCPC to fund multiple campaign components — outreach, media, education, training, community events, and peer groups — to combat the dual stigma faced by LGBTQ+ community with mental health challenges," said Lisa Putkey, program director for the center. "The survey is a smaller component to help us learn more about stigma in our community and establish baselines."

More than 3,000 people across the nation in August were polled by Kaiser to assess attitudes and perceptions toward mental health in the Kaiser survey. According to a Kaiser press release, 70 percent of people surveyed said that people are more open to discussing mental health issues and conditions today compared to a decade ago. However, more than half said they believe a family member or friend was struggling with a mental health issue but not telling them.

The San Mateo survey, still being conducted, asks LGBT related questions for insight into the intersection of mental health stigma and LGBT identity. If interested in taking the survey, visit https://bit.ly/2Fgdy8E.

LGBTQ Update is a weekly online column addressing issues affecting the community. It runs weekly, but is taking a break and will return December 4. Please submit comments or column ideas to Alex Madison at (415) 875-9986 or a.madison@ebar.com.

Updated, 11/13/18: This column was updated to include the San Mateo County Pride Center grant item.