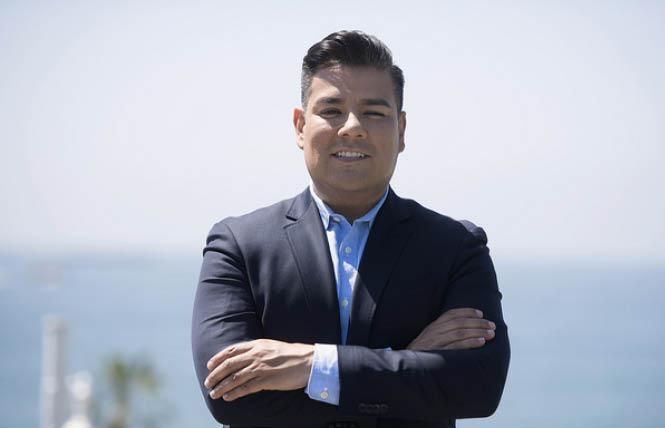 The unprecedented rainbow wave in this year's midterm elections still has one member hoping to ride it to victory and make history in California. Gay state Senator Ricardo Lara (D-Bell Gardens) now has a 110,000-plus vote lead in the statewide insurance commissioner race, according to unofficial returns Thursday, November 8.

If elected, he would become the first openly gay person to win statewide office in the Golden State. And it would be a stunning turnaround for Lara, who was seen as the underdog heading into Tuesday's election, with some polls showing him losing by double digits.

As the Bay Area Reporter has noted, over the last two decades no out LGBT candidate has been successful in their bid for statewide office in California.

The senator was holding onto a slim lead of 1.6 points on Election Night. Fellow gay state Senator Scott Wiener (D-San Francisco) congratulated Lara on Twitter that night, mentioning the historic aspect of the race.

"I'm so proud of my colleague & friend, Senator Ricardo Lara, who's leading in the race for Insurance Commissioner. If Ricardo prevails - I believe he will - he will be the first openly LGBT statewide elected official in California history. Go Ricardo!" wrote Wiener in his tweet.

Lara made headlines last year when he introduced Senate Bill 562, designed to make California the first state to effectively implement a single-payer, universal health care system. Although it passed in the Senate, the bill eventually died. Lara continues to advocate for a statewide single-payer health plan, though realizing it will likely take years to accomplish and will cost billions of dollars.

As well, after the October 2017 wildfires that ravaged the North Bay and many other wildfires throughout the year in the state, Lara proposed legislation that aimed to protect homeowners from getting booted off their insurance policies.

The progressive Democrat is backed by the California Democratic Party while also closely tied to labor unions, who support him in the race. Lara has already made history as the first openly gay person of color to serve in the state Senate.

The winner of the race will replace Democrat Dave Jones, who served two terms and made an unsuccessful run in June for attorney general.