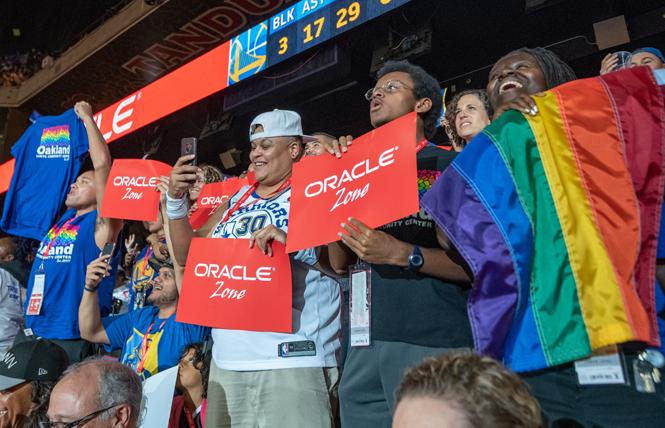 We live in disturbing and divisive times (and your perspective on who is responsible for such dangerous divisiveness depends mostly upon which side of the divide you dwell) that promise to remain disturbing and divisive as the ripples from the midterm elections play out and are absorbed. The timing was serendipitous, therefore, when the Golden State Warriors gave us a couple of moments over the past few weeks to gain resolve and focus.

The two-time defending NBA champions held their annual LGBTQ Night Friday, November 2, when they hosted the Minnesota Timberwolves at Oracle Arena. Festivities started with a pre-game mixer and an opportunity for special-event ticket holders to receive commemorative T-shirts and to take their pictures with the 2015, 2017, and 2018 NBA Championship trophies. The San Francisco Lesbian/Gay Freedom Band played the national anthem and Cheer SF performed at halftime. Warriors entertainers waved rainbow flags and wore special event T-shirts throughout the night. Videos featuring interviews with Jason Collins, the first openly gay active player in the NBA; and Warriors coaches Steve Kerr, Mike Brown, and Jarron Collins (Jason's twin) discussed the importance of being LGBTQ allies and how to become involved.

Then the Warriors played their uniquely selfless brand of basketball and blew away the 'Wolves 116-99.

Consider that in these final days in the arena before they move west to Chase Center in San Francisco, the Warriors, who had so many years of stupefyingly horrendous basketball on their home court, are heading out the door while playing the best team basketball of their lives — hell, possibly the best team basketball in the history of the NBA. Consider that when I started writing these sports columns a little more than a decade ago, there were teams in our area that did not know what a Pride event or an LGBT Night was when I asked them if they planned to have one; now such events are virtually a given at the outset and become more fabulous with the passage of time.

None of that, neither the selfless team play nor the inclusive celebrations, occurs in a vacuum, or without deliberate thought and dedicated action. They occur with commitment and awareness. The process requires action — but begins with words.

Which takes us to another enlightening moment courtesy of the Warriors. On Tuesday, October 23, head coach Kerr appeared as the prime attraction at University of San Francisco's Silk Speaker Series, talking about leadership and the importance of sports activists. He said he sees outspoken athletes not as a distraction, but as a valuable part of the democratic dialogue, with roots deeply imbedded in a historic quest for social justice.

"The times call for them," Kerr said of candid athletes.

"I was born in 1965," he continued. "My earliest memories of the world around me came at the end of the Vietnam War. Students all over the country were protesting the war. President Nixon was impeached. After that, there was this relative calm until 9/11. It just felt like we could live comfortably and politics were relatively civil. The country wasn't so divided. It wasn't like this death match that it seems like now."

Kerr remembered those earlier days of protests and counterprotests as dark and troubling times, but said he is so grateful people protested and progress was forged and that now people realize the degree to which the government lied about the war.

"So, it's not like misinformation from the government or from industry is new, it's just that there's a powerful force behind it now with social media and propaganda," Kerr said.

It is that unrelenting barrage that Kerr said prompts him to use his public platform to speak out for things such as gun control and in support of other athletic activists.

"I have a microphone in front of me an awful lot, so I have a tendency to speak up," he said.

"I think one of the great things about our country is we are a melting pot," Kerr said. "One of the things I think about when I watch Colin Kaepernick is, I think about Muhammad Ali and the civil rights era. I think about John Carlos and Tommy Smith raising their fists at the Olympics. These African-Americans were vilified in our country. Muhammad Ali was hated in this country by a lot of people and was supposed to go to prison for not going to Vietnam. He was vilified. Thirty or 40 years later, he is revered as this icon, but at the time he was not. He was protesting something nonviolently, using his platform to speak out. I think that's what any person has the right to do in this country. I think Colin found his voice, and out his money where his mouth is."

This week and in the weeks moving forward, we will find out how powerful our voices are and how effective our efforts are, wherever we are on the great divides. We've been through it before, and not only have we survived, we have thrived. One way or another, barriers will fall.