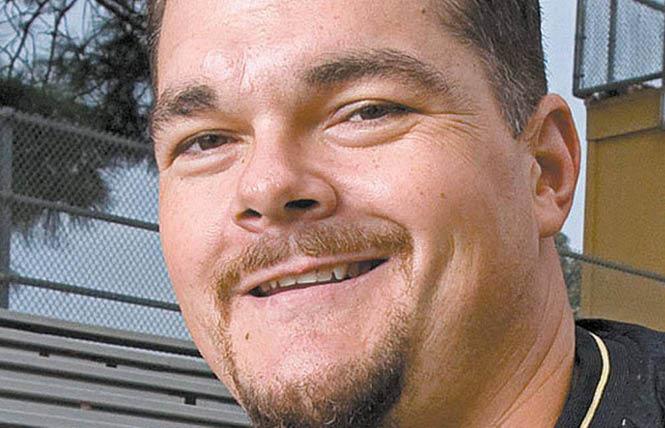 David Kelley was fired from his football coaching job at Morro Bay High School after making an offensive anti-LGBT comment to players. Photo: Courtesy the Tribune

A head football coach has been fired from his coaching position, but continues to teach at a Central Coast California high school after allegedly saying, "Stop looking at me like a homosexual," to some of his players.

David Kelley reportedly used the insensitive language October 24, according to San Luis Obispo newspaper the Tribune. The local newspaper spoke to students at Morro Bay High School who recalled the incident that occurred in a locker room. Kelley was in an irritable mood, the players said, and was urging some of his rowdy players to get ready and get to practice.

"JV was sort of messing around and Kelley told them to stop it and get to practice," Rocky Brebes, a senior member of the varsity squad, told the paper, referring to players on the junior varsity team. "The student was sitting there and just smiling at Kelley, not doing anything like getting going and ready and Kelley got even more mad and said, 'Stop looking at me like a homosexual and get the (expletive) to practice.'"

The students also said they "love" Kelley and that he was more like family than a coach. They never heard their coach use language offensive to the LGBT community before, they told the Tribune. Kelley has been head football coach since 2015.

A representative from the Gay and Lesbian Alliance of the Central Coast spoke with the Bay Area Reporter and said it's planning on issuing a statement regarding homophobia in sports in response to the incident. Michelle Call, executive director, said the district is trying to push the narrative that Kelley was fired for his poor performance as a coach, not the offensive LGBT comment. The football team has had continuous losing seasons since Kelley took over.

"This really concerns me," she said. "Parents said to me their son and 60 other kids heard what the coach said. Those students who may be gay and not out yet felt 'othered' and others feeling superior. To have kids possibly taking away this message and hearing this kind of language is harmful to their mental health."

The LGBT organization posted the Tribune article about the incident on its Facebook page November 2 and a user, Anthony Lopez, left a comment that read, "I had him as a teacher and he made uncomfortable comments about gay people on multiple occasions."

Kelley is a U.S. history teacher at the high school.

"I don't think he should have any access to vulnerable adolescents and LGBT students taking his U.S. history classes and feeling isolated if he doesn't think they have a right to be there," Call said.

The district scheduled an employee training prior to the news of Kelley's statement with the Central Coast Coalition for Inclusive Schools to inform the district's five-year equity plan. The Gay and Lesbian Alliance of the Central Coast is also participating in the training, and Call said she feels the district wants a more inclusive and safe environment for the LGBT community.

Morro Bay High School Principal Kyle Pruitt called Kelley's comment "unacceptable," in a letter he sent out to parents six days after the incident, according to the Tribune.

When he spoke to the Tribune, Pruitt said Kelley's comments, "made me sick to my stomach." He also said he considers the comments offensive to all communities.

Pruitt confirmed to the Tribune that Kelley is still employed as a teacher and that the status of his employment is in the hands of the school's personnel director, as well as the San Luis Coastal Unified School District.

Pruitt and the San Luis Coastal Unified School District did not respond to requests for comment from the B.A.R. before this article was published.

Companies unite in support of trans community
In the wake of the New York Times report that the Trump administration may attempt to "erase" the trans community, many companies have declared their united support.

The statement comes in direct response to an October 21 Times article that stated that the U.S. Department of Health and Human Services has reportedly prepared a proposal to limit the identification of a person's gender to include only "male" or "female" that is listed at birth. This could potentially rollback health and other civil rights for trans individuals.

Companies that have signed on to the statement of support so far include Amazon, Apple, The Coca-Cola Co., Nike Inc., IBM Corporation, and more. Combined, the signatories have a collective annual revenue of more than $2.4 trillion and 4.8 million employees, according to HRC.

The business statement reads, "We, the undersigned businesses, stand with the millions of people in America who identify as transgender, gender nonbinary, or intersex, and call for all such people to be treated with the respect and dignity everyone deserves."

It continues, "We oppose any administrative and legislative efforts to erase transgender protections through reinterpretation of existing laws and regulations. We also fundamentally oppose any policy or regulation that violates the privacy rights of those that identify as transgender, gender nonbinary, or intersex."

The statement added that the businesses will continue to expand inclusion for transgender people across corporate America.

San Francisco-based Levi Strauss & Co., is also a signatory and has been a longtime LGBT advocate, receiving a 100 rating in HRC's 2018 Corporate Equality Index.

"Equality is not a right for some, but for all. Executive actions and laws that allow discrimination erode our ability to foster vibrant, competitive workforces, which halts growth, creativity, and innovation," Elizabeth Wood, chief human resources officer at Levi's, said in a newsletter. "Our workplaces and communities must be diverse and welcoming for all people, regardless of race, sex, national origin, ethnicity, religion, age, disability, sexual orientation or gender identity."

Tia Silas, vice president, global chief diversity and inclusion officer at IBM, said, "We believe no one should be discriminated against for being who they are. That's why we're proud to stand in support of the transgender and entire LGBT+ communities, and it's why we will continue advocating for Congress to pass the Equality Act and ensure transgender individuals are treated equally under the law."

BALIF files amicus brief in transgender Iowa case
Bay Area Lawyers for Individual Freedom has joined 25 other organizations in filing an amicus, or friend-of-the-court, brief in support of a lawsuit now in the hands of the Iowa Supreme Court.

When the women unsuccessfully appealed the decision of the state to deny them coverage for the surgery, they sought review in Iowa state court in Good v. Iowa Department of Human Services. They were represented by the American Civil Liberties Union of Iowa and attorneys from Nixon Peabody.

Iowa District Court Judge Arthur Gamble ruled June 6 that Medicaid violated the gender identity protections under the Iowa Civil Rights Act and the equal protection guarantees of the Iowa Constitution, according to the Impact Fund, which also filed an amicus brief. However, the judge also ruled that the IDHS did not violate the Iowa Civil Right's Act prohibition against sex discrimination. The state appealed the ruling to the Iowa Supreme Court.