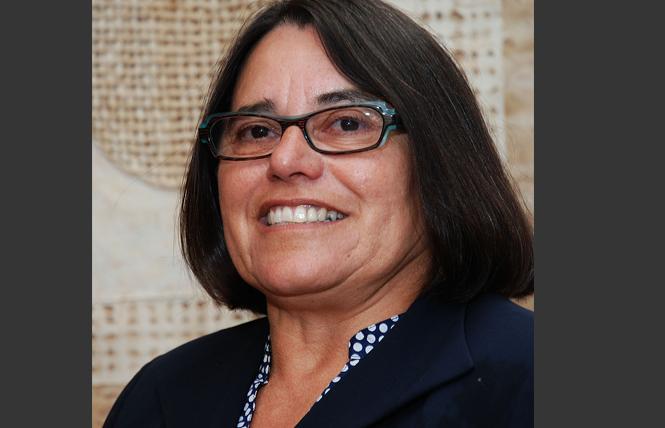 San Francisco AIDS organizations plan to present the city's former health director Barbara Garcia with an award in honor of her efforts to address the needs of people living with HIV and AIDS.

Garcia, a lesbian, had led the city's Department of Public Health for nearly eight years. She had been with the department since 1999 and was selected as the department's director in 2011 by then-mayor Gavin Newsom.

But, in August, she was forced to resign due to a conflict-of-interest investigation into allegations that she failed to disclose her wife's income from a college that had received a million-dollar, sole-source contract with DPH, according to media reports. Garcia has not spoken publicly about the allegations against her.

Despite the controversy, the HIV/AIDS Provider Network has decided to present Garcia with its Hero Award. The group is comprised of roughly 20 nonprofit agencies with city contracts to provide HIV services.

"We have only bestowed a HAPN Hero Award on a few worthy recipients," said Hirsh, executive director of the AIDS Legal Referral Panel. "Barbara Garcia is somebody who has done an incredible amount in the fight against the epidemic. She comes from a very community-based perspective. She has always had a great appreciation for the array of services needed to support people living with HIV and AIDS."

The coalition had invited its members to attend a ceremony November 15, hosted by Maitri Compassionate Care, to see Garcia accept the award. But after the B.A.R. made inquiries about the event Monday, Garcia texted HAPN co-chair Lance Toma, CEO of the San Francisco Community Health Center, to say she could no longer attend that day.

Hirsh told the B.A.R. they are now looking to reschedule the event to a different date. As for Garcia, she did not respond to a request for comment for this story.

Anne Gimbel, executive director of Maitri hospice in the Castro, is on the HAPN executive committee. She told the B.A.R. she offered to host the award ceremony for Garcia, as she had done for Sheehy's ceremony. But when asked about the decision to honor Garcia, Gimbel responded, "I don't think I am going to get into it," and referred the B.A.R. to Hirsh.

He said the circumstances of Garcia's departure did not impact the decision to honor her.

"It is important to recognize her years of service to the community," he said. "We wanted her to know we were deeply appreciative of the work she has done over many years."

Hirsh noted that Garcia was a fierce advocate for backfilling federal AIDS cuts with city funds. San Francisco officials have backfilled $16.3 million in federal AIDS funds since the 2013 fiscal year.

Garcia was also an early supporter of calls for a plan to end the transmission of HIV in San Francisco, added Hirsh. The community-developed strategy is known as Getting to Zero and aims to cut new HIV cases by 90 percent come 2020. As the B.A.R. first reported in September, the city recorded 221 new HIV diagnoses in 2017, the lowest number since the start of the epidemic.

"She has helped us go beyond just backfilling cuts and expanding capacity through the Getting to Zero effort," Hirsh said.

The Getting to Zero SF committee and the city's HIV Community Planning Council are co-sponsors of the event honoring Garcia.

The city's health commission is expected to interview three candidates to succeed Garcia in December; Mayor London Breed will then select her replacement. In the meantime, Greg Wagner, DPH's chief financial officer, is serving as the city's interim health director.