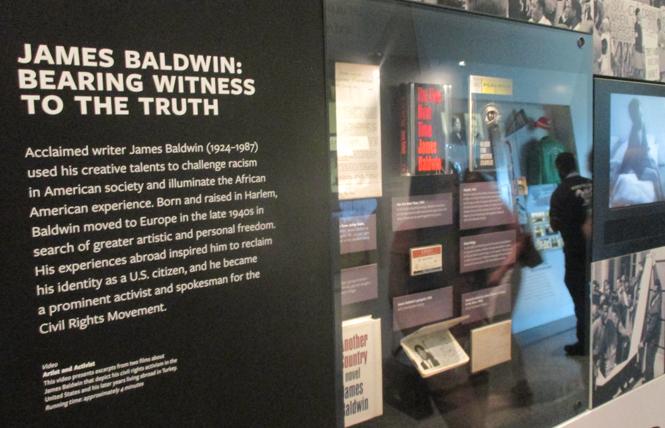 An exhibit on James Baldwin is featured at the African American Museum of History and Culture in Washington, D.C. but doesn't mention that he was a gay man. Photo: Ed Walsh

On a four-hour visit to the National Museum of African American History and Culture in Washington, D.C., I was struck that I didn't see any exhibits dedicated to the unique cultural experience of LGBT African-Americans.

One of the more prominent exhibits on author James Baldwin was titled: "James Baldwin Bearing Witness to the Truth," but nothing in the exhibit mentioned what I thought was his truth, that he was an openly gay man during a time in the 1950s when that was a serious career risk. His life was reflected is his groundbreaking 1956 novel, "Giovanni's Room," based in part on a romantic relationship he had with another man while living in Paris.

The $540 million Smithsonian Institution museum opened just two years ago and has a wide range of diverse exhibits: from an examination of discrimination within the African-American community over the shade of a person's skin color to both a permanent and a large, temporary exhibit dedicated to the "Oprah Winfrey Show." Glimpses of the Bay Area are included in the museum's exploration of black migration to California and other Western states. An interesting exhibit recreates a porch in the town of Oak Bluffs on Martha's Vineyard, Massachusetts, which has long been a popular summer vacation spot for middle and upper income African-Americans.

I wondered, did the museum short-change LGBT African-Americans? Is there a reason why not even a small corner in the massive 400,000 square foot museum could be devoted to explore the unique cultural experience of African-American LGBTs? Did it purposely leave out the identity of LGBT African-Americans even in cases where their sexual orientation influenced their work? Even in a four-hour visit, it was impossible to see and read all the exhibits, so had there been LGBT-related exhibits that I missed?
In an interview with the Bay Area Reporter, museum curator Aaron Bryant took those questions head-on. It turns out that the works and contributions of numerous LGBT African-Americans are sprinkled throughout the museum's various exhibits and their sexual orientation or gender identity are noted.

Bryant said that it was not possible to include everything everyone wanted in the museum, but he did not rule out installing an LGBT exhibit in the future. He also noted the museum is taking on LGBT issues on social media platforms as well as LGBT events in the museum.

As for including a mention of an LGBT person's identity in an exhibit description, Bryant said that with only about 50-75 words to describe a person's prominence and life's work, being LGBT doesn't always merit inclusion in the description.

"We have to prioritize and ask ourselves what is the most important contribution that this person has made to American history or world history," the curator said.

When asked specifically about Baldwin, Bryant noted a Village Voice article based on a 1984 interview, three years before his death.

Baldwin said in the interview: "The word gay has always rubbed me the wrong way. I never understood exactly what is meant by it."

Writer Richard Goldstein asked, "You never thought of yourself as being gay?"

Baldwin replied: "No. I didn't have a word for it. The only one I had was homosexual and that didn't quite cover whatever it was I was beginning to feel. Even when I began to realize things about myself, began to suspect who I was and what I was likely to become, it was still very personal, absolutely personal."

In the 1984 interview, Baldwin described his love for another boy when he was 14. Toward the end of the interview Goldstein asked, "You will always come forward and make the statement that you're homosexual. You will never hide it, or deny it. And yet you refuse to make a life out of it?" Baldwin responded, "Yeah. That sums it up pretty well."

In an excerpt from an undated black-and-white television interview posted on YouTube, Baldwin implied that his background as a poor, black homosexual had a positive influence on his writing. The interviewer asked, "When you were starting out as a writer you were a black, impoverished homosexual. You must have said to yourself, 'Gee, how disadvantaged can I get?'" Baldwin responded, "No, I thought I hit the jackpot. It was so outrageous, it couldn't go any further, so you had to find a way to use it."

Bryant noted, "Out of respect for Baldwin and others of this generation we just sort of focus on what was the most important contribution, whether it was professional, cultural or historical contribution to American or world history." 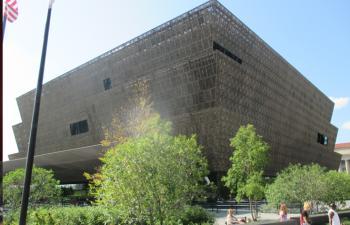 The African American museum of History and Culture in Washington, D.C., has LGBT references sprinkled throughout its exhibits. Photo: Ed Walsh

Bryant added that singer Gladys Bentley is also identified as gay in the music gallery of the museum. The curator wrote in an email, "Paintings by Earl Richardson and Malvin Gray Johnson are exhibited together and the Richardson label mentions that he and Johnson were in a romantic relationship.

"Hank Willis Thomas' 'Question Bridge' is a video of black men discussing identity and being black male, and, of course, includes gay men and covers LGBTQ topics," he added.

He said that Lorna Simpson's "A Lie Is Not a Prophylactic" was created for the Art Against AIDS project, and an excerpt from Rashaad Newsome's "Shade Composition" plays in Cultural Expression.

House compiled a list of some of the items in the museum that are connected with the LGBT community.

Starting with the Culture Galleries, the museum's collection contains numerous objects from Riggs, an American filmmaker, poet, and gay rights activist. A "Tongues Untied" film poster (1989) signed by Riggs and Essex Hemphill is on display.

"'Tongues Untied' is a documentary directed by Riggs that celebrates romantic love between African-American men," House wrote in the email. "The poster features two shirtless African-American men, with one wrapping an arm around other. The film notably ends by depicting three juxtaposed moving images: obituaries of individuals who passed away from the AIDS virus, footage of the civil rights movement, and footage of Black men marching in a gay Pride parade."

On display in the Musical Crossroads exhibition is a display section on Thornton, the first person to record the famous tune "Hound Dog." The display text and video featuring Thornton mentions her unique style of dressing in work-slacks and plaid shirts, again eschewing gender norms.

The Visual Arts Gallery includes works on display by Earl Richardson, Beaufood Delaney, Wiley, Sheldon Scott, and Whitfield Lovell all of whom identify as a member of the LGBT community.

Additional items include Sheldon Scott's "Sweet Boy" painting on display that addresses the LGBT experience. According to Scott, the work expresses the discordance of his relationship to gender, sexuality and femininity.

Also on display in the Culture Galleries are objects from artists who have self-identified as a member of the LGBT community. For instance, Loretta Mary Aiken ("Moms" Mabley) was among the first openly gay comedians. She is prominently featured in Taking the Stage exhibition as a groundbreaking comedian alongside Richard Pryor, Bill Cosby, and Redd Foxx. More items on display by artists who identified as LGBT include:
- First edition of "Rachel: A Play in Three Acts" by Angelina Weld Grimké;
- Playbill from "The Colored Museum" by George C. Wolfe;
- Original playbill from "A Raisin in the Sun" by Lorraine Hansberry;
- Record album and photo mural of Jackie "Moms" Mabley;
- Costume from "The Color Purple" based on the novel by Alice Walker;
- Costume from "Monster's Ball," produced by Lee Daniels;
- Photographs by Jack Mitchell of Alvin Ailey and Alvin Ailey American Dance Theater;
- Clip from "D-Man in the Waters" by Bill T. Jones is featured in the "Dance makers" video;
- Photo mural of Josephine Baker;
- Introductory collage includes images of Ethel Waters and Wanda Sykes.

Moving onto the History Galleries, Baldwin, Audre Lorde and Langston Hughes are quoted along walls throughout the history galleries, House said.

The main display case on Rustin identifies his sexuality in the first line, "Bayard Rustin was a gay man master civil rights strategist." The description goes on to say that his homosexuality troubled some leaders but Dr. King found him to be an invaluable adviser, House wrote.

"In the section called, 'The Movement Marches On,' we have on display a button that says 'Remember Stonewall.' Adjacent to the button is text on gay and lesbian movements," House wrote.

On display in Decades section is a photograph from a Million Man March participant wearing an "I AM A BLACK GAY MAN" placard.

"On the museum's website, one example is this blog titled 'Five Trailblazers You Should Know: Pride Edition' that features Marsha P. Johnson, Moms Mabley, James Baldwin, Alvin Ailey and Audre Lorde," he added.