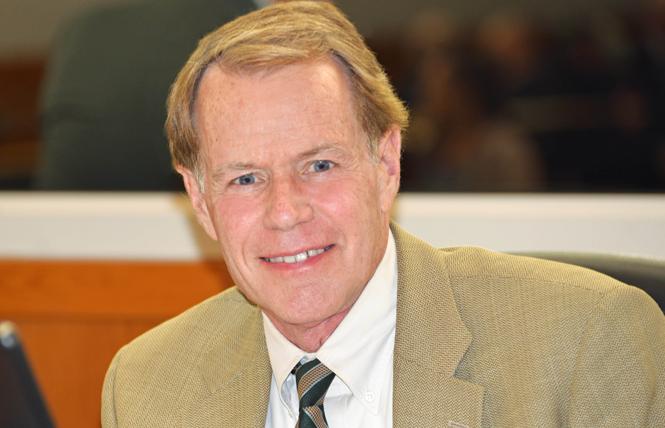 Santa Clara County officials have moved forward with opening a shelter for LGBT adults, and now it's up to the city of San Jose to finalize the lease.

The San Jose City Council is expected to vote on the lease December 4.

Last month, the Santa Clara County Board of Supervisors voted unanimously to approve nearly $2.3 million for the shelter project.

The county's elected officials, the Office of LGBTQ Affairs, and homeless experts are now pushing through the last few hurdles to get the program open no later than December 15, Brian Greenberg, Ph.D., vice president of programs and services at LifeMoves, told the Bay Area Reporter.

"We hope to be open for the majority of the winter, but probably not before the first rain," said Greenberg.

LifeMoves, a Palo Alto-based homeless services organization, was contracted for $1.9 million by the county to handle daily operations at the shelter starting immediately through June 20, 2023.

Once open, it will be only the second shelter of its type in the country. A similar shelter, Jazzie's Place, opened in San Francisco's Mission district in 2015.

"We wanted a shelter that would be welcoming to all," said gay Supervisor Ken Yeager, who felt that creating a safe place for LGBT homeless adults was an easier route than attempting to change existing shelters to accommodate LGBTs.

The shelter, which will be in a residential two-story triplex, has 12 rooms and six bathrooms. It will house and provide social services for up to 20 homeless LGBT adults over the age of 18 nightly. The program won't discriminate based on sexual orientation, gender, or gender identity, but it will be designed specifically for LGBT individuals in need, with a focus on young adults, officials said.

It will also provide specific space for gender-nonconforming individuals, including single-stall restrooms and showers for privacy, and a dedicated area for self-administered medications.

While officials plan to have the shelter open this winter, it won't be fully operational until April, according to the agreement between the county's Office of Supportive Housing and LifeMoves, said Greenberg.

The triplex, known as the Haven, is located in central San Jose. Operated by LifeMoves, it is an underutilized emergency shelter for low-income families and individuals, said Jacky Morales-Ferrand, housing director of the city of San Jose.

The county is renting the building, which is owned by the city, for $63,000 a year, said Yeager, who will term out representing District 4 at the end of the year.

Money from the property's rental will be used to provide temporary hotel vouchers to about 15 families a year for up to 28 days, according to the proposed agreement.

Hurdles
The project has been a multi-pronged effort involving more than 70 stakeholders, including county, city, and community leaders, as well as LGBT young people and residents of the neighborhood where the shelter is located, said Maribel Martinez, director of the county's Office of LGBTQ Affairs.

Greenberg currently oversees nine shelters from Daly City to San Jose, along with eight other facilities operated by LifeMoves. The organization will work with San Jose-based LGBTQ Youth Space, a program of Caminar, an organization providing behavioral health and supportive services in the Bay Area, to identify and refer candidates for the program.

Greenberg and Martinez said they are working with the supportive housing office on a coordinated outreach effort to the LGBT community and a referral process.

"Those kind of large homeless settings with a diverse group of people can be difficult for young adults that are gender-fluid, especially to feel safe in those settings," said Greenberg.

Anthony Ross is the transgender program manager at the LGBTQ affairs office.

"The most important piece is that people are going to be able to go to a place that they know that the staff are aware and sensitive to their needs specifically," he said, calling the shelter "critical for trans folks."

"This is something that I think is going to make a huge difference for a lot of young people and adults who are struggling to find housing," he added.

LifeMoves has already hired a full-time case manager for the program, said Greenberg. He's now searching for a full-time shelter director and staff to be on hand 24/7.

He also plans to work with interns specializing in mental health, social work, and other support services to help youth get on their feet through an internship program.

"Every plan of treatment or plan of care is unique to that individual," said Greenberg, who anticipates people will stay at the shelter between two and five months. "What we want to do is remove any barriers that they have to securing permanent housing."

Morales-Ferrand, who is bisexual, told the B.A.R. that the city is going through the administrative process for the special rental rate, funding, and rehabilitation requirements for the building.

The city's outline for the rehabilitation of the facility was returned to the county October 22, she said.

The next step is a 30-day review and notification to the public, including the neighborhood where the shelter is located. The proposal is currently scheduled to go before San Jose's City Council in early December, she said.

"The city has been very supportive of the project," said Morales-Ferrand. "We think it's a great idea. We are happy to move forward with it."

San Jose Mayor Sam Liccardo said the project "will create a welcoming atmosphere for both our homeless LGBTQ neighbors and other residents who lack a roof over their heads."

"Everybody deserves to sleep in a place where they feel safe and comfortable, and we will continue working with the County to open this facility as quickly as possible," he added.

Urgency in a time of need
Emerald, a 23-year-old bisexual journalism student who asked to be identified only by their first name due to safety concerns, got kicked out of their violent home for being queer in 2015.

A friend's family took Emerald in until they found employment while going to college. They said they found permanent housing in 2016.

Emerald knows how lucky they are. They know they could easily have been like their other friends who have been, or are currently, living on the streets, or found a place to squat because they don't feel safe going to the shelters, they told the B.A.R.

"I had someone come up to me ask me, you know, 'OK, if you can't find me a place to sleep tonight will you sleep with me underneath a bridge so that I'm not alone and I don't have a chance of being mugged a third time?'" Emerald said.

For more than a year the Bay Area native attempted to find services to become self-sufficient but found themselves in a cycle of rotating LGBT-friendly service providers.

Emerald has been vocal about temporary housing for LGBT youth and was one of the advisers on the committee to create the shelter and services. It has taken a long time to get the LGBT-specific shelter.

Supervisor Cindy Chavez apologized to the LGBT young adults present at the recent board meeting, including Emerald, for not opening the shelter sooner.

She instructed, with Yeager's support, Ky Le, director of the county's supportive housing office, and Martinez, to make the urgency of the need clear with San Jose officials to expedite the process.

At the same time, Yeager confirmed with Bruce Ives, chief executive officer of LifeMoves, that staff would be ready to launch the program as soon as San Jose gave the green light.

Ives confirmed that staff training was already underway and the $1.2 million rehabilitation of the building will be done in conjunction with its opening in order not to delay services.

Costs for exterior improvements and community amenities are still being assessed, according to the agreement.

Just the beginning
"One of the things that I want to stress about the shelters, we need more than one," said Emerald, adding that all shelters should be culturally sensitive.

David Campos a gay man who's a deputy Santa Clara County executive, said the planned shelter needs to be successful first. Campos, a former San Francisco supervisor, was one of the proponents of getting Jazzie's Place opened, though that project took years.

Campos told the B.A.R. that he took lessons from that experience and applied them to opening the South Bay shelter, which has fewer barriers allowing for an expedited the process.

"The more immediate goal is to make sure that you give the queer homeless youth, in particular that are living on the streets of Santa Clara [County], a place to go," said Campos.

Once that's accomplished, officials can look at opening other shelters and training shelters to be culturally sensitive to the LGBT community.

"The hope is to get the entire system to a point that anyone can go anywhere, but we're not there yet," Campos said.

Aside from providing safe housing to the LGBT community, one of Chavez's other goals is to showLGBT people that they are welcome in the county.

"I hope it shows the community, the entire LGBTQ community, that in Santa Clara County they are not only respected, but welcome," she said. "You have a place not just in the world but here in our community."

Updated, 11/5/18: This article was updated to correct information about LGBTQ Youth Space.