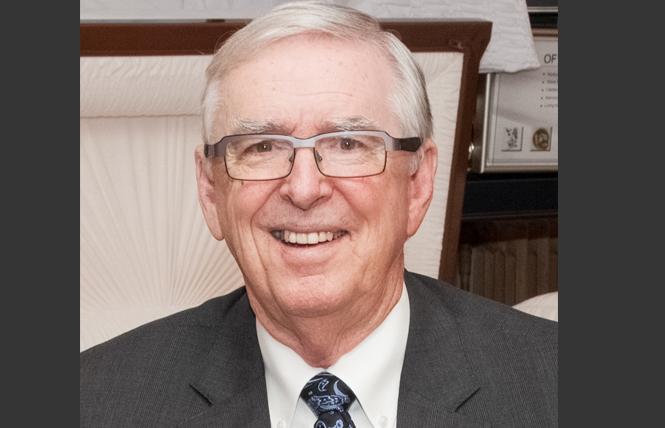 James Sullivan, a straight man who helped facilitate the funerals of hundreds of HIV/AIDS victims at the height of the epidemic, died October 3 at a nursing home in the city after suffering a heart attack. He was 76.

Mr. Sullivan, who went by Jim, was the co-owner of the Arthur J. Sullivan & Company Funeral Home, operated for decades at 2254 Market Street. The business was passed down to Mr. Sullivan and his brother, Arthur Sullivan, by their father.

In 2016, Mr. Sullivan sold the business to another funeral home before the Prado Group purchased the site for mixed-use development.

Jerry Lynn Sullivan, Mr. Sullivan's wife, told the Bay Area Reporter this week that Mr. Sullivan was scheduled to have his leg amputated due to complications associated with Type 1 diabetes, but died two days earlier. His death did not come as a shock, she added, saying he had been very ill in recent months.

She talked about how Mr. Sullivan practically worked up until the day he died and how he was "outstanding" at what he did. The brothers' grandfather opened the funeral home in 1923, and Mr. Sullivan and his brother took it over in 1970.

In 2009, after Mr. Sullivan suffered his first heart attack and underwent triple bypass surgery, he decided to sell the business to Duggan's Serra Mortuary in Daly City, which operated it under the Sullivan name until its closing in 2016. In its last year, the funeral home was doing about 225 funerals a month before it was sold to a developer because the next generation of the Sullivan family was established in other career fields and not able to continue the legacy.

The Duggan family has since opened Sullivan's and Duggan's Serra Funeral Services on Geary Street where Mr. Sullivan worked part-time until his death.

A significant aspect of the Sullivan legacy is the funeral home's contribution to those who died of AIDS. The Sullivans were the people the gay community went to for help burying their loved ones who died during the epidemic that claimed thousands of San Franciscans, his wife said.

"They buried the people with AIDS without any question," Jerry Lynn Sullivan said. "The community appreciated what they did, and when we shut down we had person after person say how much they appreciated what was done for them."

Mr. Sullivan also had a gay brother who died of AIDS-related complications in 1985.

"Sullivan's was among the first funeral directors in the Bay Area to provide its professional care and services to surviving family and friends of those lost in the early days of the AIDS crisis, when many others in their profession would not," the newsletter stated. "We were especially pleased to honor Jim, Art, and Sullivan's at Castro Merchants' March 2016 members meeting when they were presented with Certificates of Honor and Appreciation from the State of California Senate, San Francisco Board of Supervisors, and Castro Merchants."

According to an obituary in the San Francisco Chronicle, Mr. Sullivan was born April 21, 1942 in San Francisco. He graduated from the University of San Francisco in 1964 and was a member of the U.S. Army for 25 years, retiring as colonel and chief of staff of the USAR 91st Division.

He was a former president of Greater Mission Rotary Club, a longtime lecturer at St. Brendan Church, and a lifelong San Francisco Giants and 49ers fan.

In addition to his wife and brother, Arthur, Mr. Sullivan is survived by two sons and a daughter, and two sisters.

A funeral was held October 7 at St. Brendan Church.