Editorial: Vote, your life depends on it 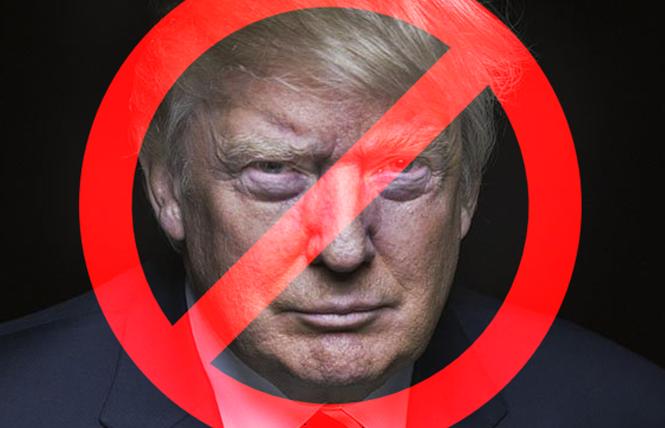 Vote to put the brakes on President Donald Trump's agenda.

We must put the brakes on the Trump train wreck — vote Tuesday, November 6.

If you have any doubt that your vote matters, just consider the past week. It started with a New York Times article about the Trump administration's plan to redefine gender based on a baby's genitals at birth. Following that depressing news, two people were targeted, shot, and killed by a white supremacist because they were African-American. Then, suddenly, pipe bombs were mailed to leading Democrats, including former President Barack Obama and Secretary of State Hillary Clinton, a news organization, and other critics of President Donald Trump. Cesar Sayoc, the man who was arrested and charged in the case, was revealed to be a rabid Trump supporter who, apparently, took the president's "enemy of the people" media bashing literally. Then last Saturday, Robert Bowers allegedly shot up a Jewish synagogue in Pittsburgh, Pennsylvania, killing 11 people and wounding many others. He was arrested and charged with 29 counts, including murder and hate crimes. The deadly hate that President Donald Trump inspires must be denounced and stopped.

Trump's words do impact the discourse, or lack thereof, in our country and world today. Right-wing lunatics are emboldened to activate their fantasies, whether it's Bowers, who reportedly told a police officer that "I just want to kill Jews," or Sayoc, whose van was covered with pro-Trump and anti-media stickers and who was filmed at a Trump rally holding a "CNN Sucks" sign.

The president is freaked out about all this media attention focused on his fringe supporters. So, of course, in a cynical ploy, he whips up anti-immigration hysteria. The administration announced that 5,000 troops will be sent to the Mexican border and just Tuesday, Trump said he can, via executive order, eliminate birthright citizenship established by the 14th Amendment to the Constitution. Don't fall for that one — it won't happen — like the 10 percent middle-class tax cut he just promised. But keep in mind that many of his supporters don't really care whether it happens or not — just the fact that Trump said it is enough to get their support.

If we want to put a check on this president and his agenda, it's imperative that Democrats take control of at least one house of Congress; at this point it looks like the House of Representatives is the more likely. Unfortunately, that won't have an effect on judicial appointments, which are the purview of the Senate. But even a Democratic-controlled House can still put the brakes on many of Trump's plans and threats.

East Bay voters could make change at the local level by electing lesbian Richmond City Councilwoman Jovanka Beckles to the open 15th Assembly District seat. Beckles is the type of politician who will not back down from Trump's tactics, especially when it comes to the president's penchant for scapegoating the LGBT community under the guise of defending religious freedom, for example. And the president has repeatedly put California in his sights, particularly our stance on climate change and immigration.

San Francisco voters should resoundingly send House Minority Leader Nancy Pelosi back to Congress, where she could become House speaker if the Democrats retake that chamber, and can work to curb the president's power. And for goodness' sake, vote for Proposition C, so that San Francisco can finally get the injection of cash it needs to get a grip on homelessness and improved services.

Finally, California voters should elect Ricardo Lara as insurance commissioner. His opponent, Steve Poizner, was, until this election cycle, a Republican. Now running as an independent, Poizner has name recognition from when he previously served as insurance commissioner, but don't be fooled by his claim of "independence" from the political parties. Lara, a gay man, would be a strong advocate for health insurance reform, and holding companies accountable, particularly regarding equity for LGBT people. Right now, Lara has an uphill climb, according to political observers, and we need him in Sacramento.

This midterm election is the most important in years. Now is not the time to be complacent, or to think that your vote doesn't count because you live in a progressive area. It does matter. Elections have consequences. And for LGBTs, those consequences could be profound.