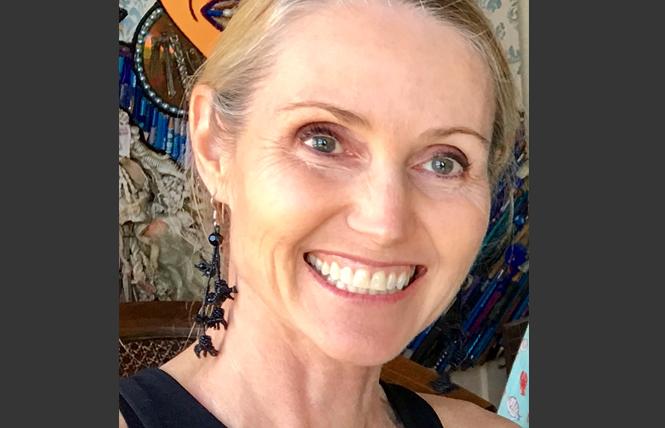 Served by itself hot or cold — or on the rocks mixed with juices or carbonated beverages — cannabis-infused herbal tea is the latest incarnation of northern California's favorite herb.

You won't find it in restaurants or bars (it's still illegal), but dozens of dispensaries and delivery services in the Bay Area are selling Kikoko Teas, a locally manufactured product that has been several years in the making.

According to company co-founder Amanda Jones, Kikoko is the only brand of cannabis-infused dried teas legally for sale in California. Other competitors include pre-mixed bottled or canned beverages.

Jones, who lives on the Peninsula, and her business partner, Jennifer Chapin, from Marin County, are straight allies who got the idea for the product when a mutual friend, then under treatment for Stage 4 cancer, urged them to create a cannabis tea, which she had been making herself to relieve symptoms of the disease and the treatment.

On vacation with a group of close friends, Jones said she brought along some edibles for the group to try. "There was a lot of laughter and outright hilarity," she said. The next morning, "we noticed we were sleeping better, had relief from back pain, and experienced less anxiety," she added.

"We realized there was a huge need for alternatives to alcohol and pharmaceuticals," she said.

Jones, who spent 25 years as a successful journalist, was enthusiastic about the idea of creating a new product.

But given the many hurdles and stumbling blocks in bringing the product to market, Jones said she isn't sure she'd go into the tea business if she had the choice to do it again.

"Chocolate would've been a lot easier, but we would've had a lot more competition," she said.

In a recent interview with the Bay Area Reporter, Jones discussed the company's evolution and how she views the future.

As a privately owned company, Jones wouldn't comment on Kikoko's sales or revenues, but pointed out that raising capital has become increasingly easy.

Now with a total of 30 workers, including 23 full-time employees based in Emeryville, Kikoko is selling "particularly well" in more upscale neighborhoods where sticker shock is not an issue, Jones said.

"It's not cheap," said Jones, with an average price of around $5 per tea bag, or a bit less when you buy a 10-pack. "It's certainly not for the person looking for the cheapest way to get high."

The ingredients used in Kikoko products are "the very best available," she said.

"Our cannabis is grown in Mendocino, California, in what's called the 'Emerald Triangle' and the plants are sun-grown using organic farming methods and, whenever possible, purchased from women growers," Jones explained.

All the herbal ingredients are also organically grown, she added.

When they launched Kikoko three years ago, both Jones and Chapin were occasional users of cannabis edibles.

"Neither of us liked to smoke," Jones said.

The pair launched the company with their own money, initially forgoing salaries. Since then, they have raised over $6 million, enough to enable them to hire a scientific team to help develop some recipes.

"We had no idea how tricky it was going to be" to develop products that masked the bitter taste of cannabis, Jones said. The women went through several different consultants before they hit upon the formula they have today.

Like many other cannabis companies, Kikoko labels its products with the "feeling" it hopes will come from using the product.

The four teas are:
- Sympa-Tea (with 3 mg of THC, the psychoactive cannabinoids, and 20 mg of CBD, which is not psychoactive) for people looking for pain relief and calming;
- Tranquili-Tea (with 3 mg THC and 5 mg CBN, a cannabinoid that typically brings on drowsiness) for people who want to relax or sleep;
- Sensuali-Tea (with 7 mg of THC) for experienced edible users who want a little buzz or a replacement for alcohol; and
- Positivi-Tea (with 10 mg THC and 5 mg CBD) for experienced edible users seeking an uplifting mood.
For research for this column, I tried all four (on separate days) and enjoyed the taste of each, particularly the buzz that came on 20 minutes after I finished my cup of Positivi-Tea.

"It has nothing to do with your weight," said Jones, busting the myth that those with a smaller body mass will get high more easily, as is the case with alcohol. "Just not true."

For those used to smoking or vaporizing cannabis, when the effects are almost immediate as the THC enters your bloodstream, edibles can take up to 90 minutes to kick in.

The Kikoko website notes that someone who drinks a cup of infused tea will typically feel the first effects within 30-90 minutes, but that "it can take longer to reach maximum result."

"Wait at least two hours before drinking a second cup," the website warns, "or making any big decision." The website also notes that users drinking the two lowest THC teas "may feel no high effect at all or you may just experience a sense of relaxation."

Unlike new products that can be introduced to consumers via free samples, state law prohibits companies from giving away cannabis in any form, Jones said.

"It's been a stumbling block," she added.

Because state law also prohibits bars and restaurants from serving cannabis, Kikoko has been promoting the idea of people inviting friends over for a cannabis tea party at home. With suggestions and recipes on the website, Jones said "well over 100" parties have been held in the Bay Area in the past year.

"People tell us they like the product," she said.

Now that the product has been on the market for 16 months, Jones said Kikoko has "aggressive plans" to expand.

With the addition of $10 million-plus in Series A capital on the horizon, the company is already set to launch a second product, a cannabis-infused honey, which will be sold in 10 mg straws in the same locations where the tea is sold.

"Perfect by itself or in the tea," said Jones.

Expansion to other states is also planned, she said.

Jones is confident that the product will continue to catch on once people get the opportunity to try it.

"It's all about education," she said. "Many people have had a bad experience with cannabis edibles, mistakenly eating too large a dose. They're nervous to try again. That's why we emphasize starting with a low dose.

"Also, there has been a tremendous stigma surrounding cannabis. In the short time we've been in business, we are seeing that change," she continued. "More and more people, particularly seniors, are coming around to trying cannabis again."