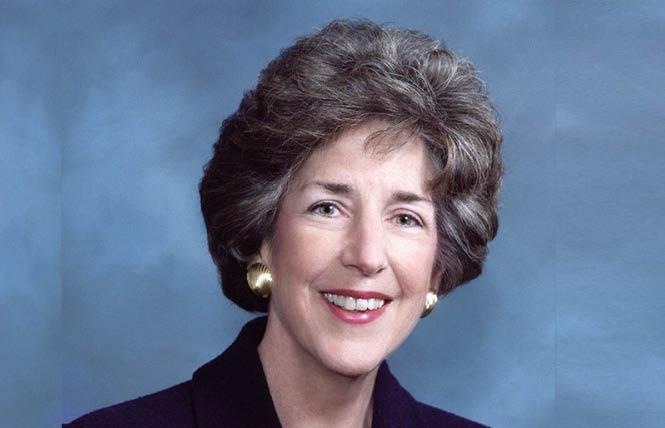 California Supreme Court Justice Carol Corrigan is facing some criticism from LGBT groups over her dissent in a same-sex marriage case.

The California judicial retention races on the November ballot have largely flown under the radar, though a state Supreme Court justice is being targeted for her dissent in a same-sex marriage case.

There are two associate justices on the Supreme Court seeking retention to their seats this year, Carol Corrigan and Leondra R. Kruger. Voters statewide can choose either yes or no on if they deserve to be elected to 12-year terms on the state's highest bench.

There are 50 appellate court justices up for retention votes next month. They also serve 12-year terms, but unlike their California Supreme Court counterparts, they only appear on the ballots in the counties covered by their appeal courts.

For instance, there are eight judges from the First District Court of Appeal based in San Francisco facing retention votes this year. Voters in all nine Bay Area counties, as well as in Del Norte, Humboldt and Lake counties, will decide if they retain their seats.

One of the appellate justices on the ballot is gay San Francisco resident James M. Humes, the first openly gay justice to be appointed to the California Court of Appeal. He was appointed to the First District in 2012 by Governor Jerry Brown, whom he had worked for as a gubernatorial executive secretary and as chief deputy in the attorney general's office. In June, he became the appeal court's administrative presiding justice.

Voters in the Second District Court of Appeal will decide if Appellate Justice Luis A. Lavin retains his seat. In 2015, he became that court's first openly gay justice when Brown named him to its Division Three. The Second District serves Los Angeles, Ventura, Santa Barbara, and San Luis Obispo counties.

And among the Fourth District Court of Appeal justices up this year is Marsha G. Slough, an out lesbian who is the first LGBT member of her appellate court. Brown in 2015 appointed her to a Division Two seat on the court, which serves the southern California counties San Diego, Imperial, Orange, San Bernardino, Riverside, and Inyo.

Humes told the Bay Area Reporter that all of his judicial colleagues deserve to retain their seats.

"All of the justices on the ballot should be retained. Now, more than ever, we need a fair and independent judiciary to protect our democratic values," Humes told the B.A.R. "The justices up for retention are smart, fair, and hardworking. And they include people from diverse backgrounds, including a gay man (myself), several women, and two African-Americans. I strongly urge a yes vote to retain them all."

Yet Corrigan has been the target of a campaign by some LGBT Democrats to see that she does not retain her seat. Their objection to her is largely due to her dissent in the 4-3 majority opinion in 2008 that struck down the state's laws banning same-sex marriage.

She began her dissenting opinion by stating, "In my view, Californians should allow our gay and lesbian neighbors to call their unions marriages." Nonetheless, Corrigan wrote that it should not be up to the court but the voters to decide if same-sex couples should be allowed to legally wed.

Another issue confronting Corrigan is the persistent claim that she is a lesbian, and thus, betrayed her own community with her decisions in the marriage cases. Yet Corrigan has never publicly identified as being part of the LGBT community.

Corrigan did not respond to the B.A.R.'s request for comment Friday about her retention race.

One of the first groups to call for Corrigan not to be retained was the San Diego Democrats for Equality. In an October 6 post on its website, the LGBT political group said her support for same-sex marriages in her dissenting opinion was refuted by her decisions in the two cases.

"As a result of her legal rulings against the civil rights of the LGBT community — her own community — I believe this is cause to not retain her as an associate justice of the California Supreme Court," stated a post to the group's website. "Sadly, if Justice Corrigan is retained, she will be re-elected to another 12-year term. That means she won't be back up for a retention election until 2030! If she is defeated, it is likely that our new governor will appoint a successor."

Then, late October 8, gay Olympic gold medal diver Greg Louganis posted to his Twitter account a call for people to not retain Corrigan, which generated coverage in two Bay Area newspapers. It has been retweeted 163 times, while a similar post on his Facebook page October 12 has generated 405 responses and been shared 93 times.

His tweet read, "CA peeps: On the ridiculously long Nov ballot you will be asked to confirm election of two CA Supreme Court Justices. One of them is #CarolCorrigan, one of 3 dissenting justices who voted against same sex marriage. Do NOT skip this — say "NO" to another 12 year term for her!!"

CA peeps: On the ridiculously long Nov ballot you will be asked to confirm election of two CA Supreme Court Justices. One of them is #CarolCorrigan, one of 3 dissenting justices who voted against same sex marriage. Do NOT skip this- say "NO" to another 12 year term for her!! https://t.co/LD7F7FGLil— Gregory Louganis (@greglouganis) October 9, 2018

The Lambda Democratic Club of Contra Costa County posted its own message October 15 calling on people to vote no for Corrigan.

"Justice Corrigan was on the wrong side of history in 2008. She should not be rewarded with another term in 2018," stated the club on its Facebook page.

The Los Angeles Times, however, endorsed the retention of Corrigan, Kruger, and all of the Second District Appeal Court justices on the November 6 ballot. In its October 4 editorial, the newspaper wrote that the two state Supreme Court justices' "votes and opinions peg neither justice as an obvious liberal or conservative, ideologue or pragmatist. Both are considered deft thinkers and writers. Both would serve the state well should they be retained and serve another 12 years."

For the full list of the appellate court justices on the November ballot, broken down by the six districts, visit https://bit.ly/2CNCFJp

Gay GOP club endorses
A statewide gay Republican group has endorsed a number of out GOP candidates and several straight congressional candidates running on the November 6 ballot.
The California Log Cabin Republicans announced last week it had endorsed five of its members running for office next month. Only one race is in the Bay Area, that of Paul Cummings for BART Board of Directors.

Cummings, a gay man, is believed to be the first out GOP party chair in the Bay Area, having led the Alameda County Republican Party in 2008. The retired Naval officer is running for the District 4 seat on the regional transit agency's board against incumbent Robert Raburn.

The district includes the city of Alameda and parts of San Leandro and Oakland. In addition to Log Cabin, Cummings is also endorsed by both the East Bay Times and San Jose Mercury News newspapers, which are owned by the same company.

In San Diego, the club endorsed two out GOP women, Bonnie Dumanis and Gina Roberts. Dumanis, a lesbian and former district attorney, is running against former state lawmaker Nathan Fletcher for the open District 4 seat on the San Diego County Board of Supervisors. Roberts, a transgender woman who is president of Log Cabin's San Diego chapter, is running a second time for a seat on the Valley Center Pauma Unified School District board against appointed incumbent Mike Adams.

Munson, who lives in Ontario, is running against state Senator Connie M. Leyva (D-Chino) in the 20th Senate District, which encompasses parts of the Inland Empire. While Munson has little chance of defeating Leyva, Nickel presents the best chance in years for LGBT Republicans seeing one of their own win a state legislative seat.

"We encourage you to find out more about these great individuals, and if possible, make a contribution in the final two weeks to help push their campaigns forward," wrote Log Cabin California Chairman Matthew Craffey in an email to members last week.