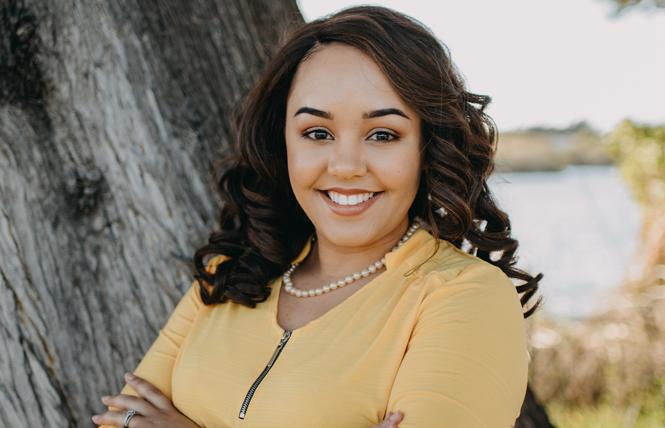 The LGBT political wave sweeping across the country this midterm election season is crashing into California's Monterey Peninsula area.

Out candidates are waging historic campaigns for political office in Seaside, Monterey, and Carmel-by-the-Sea. And in nearby Watsonville to the north in Santa Cruz County, two gay men are also on the November 6 ballot.

In the spring Salinas City Councilman Scott Davis came out as gay amid his bid to be the state's first gay county sheriff. But Davis was accused of campaign money laundering, which two different investigations found no corroboration for, and lost the race.

"This is a record year for the LGBT community. We have more candidates running now in the region than in recent memory," said Paul Escobar, president of the Bay Area Municipal Election Committee, an LGBT political group that is focused on the South Bay and parts of the Central Coast. "There is a lot of enthusiasm in both Santa Cruz and Monterey counties for what these candidates represent."

The candidate that has generated probably the most media attention ahead of the November 6 election is queer Seaside City Councilwoman Kayla Jones. She was inspired to run for her council seat in 2016 having worked on Vermont U.S. Senator Bernie Sanders' unsuccessful presidential bid.

Jones, 25, is now vying for mayor against former councilman Ian Oglesby, whom she defeated two years ago, and businesswoman Lisa Sawhney. In recent weeks Jones has been accused of failing to file financial statements, which she insists she did turn in but were lost by the city clerk, and questioned about her travel and daycare spending while on city business.

The city last year instituted a policy to cover such expenses so that parents could serve on the council, as it is not a full-time job. Jones contends she followed the rules when seeking reimbursement for her costs and is now being attacked for political reasons.

Then, last week, Jones' husband, Ryan Daniel Gibson, 26, who is also queer, was arrested on accusations of domestic violence. He has a court date later this month. In a Facebook post Jones noted that, "even in minor cases," the police are obligated under California law to arrest a person who may have injured an intimate partner.

"Ryan and I love each other very much and we are okay," wrote Jones, who has a 4-year-old daughter with her husband. "My family has been under a lot of stress in the past month due to targeted attacks, mistruths in the media, and the vitriolic behavior from those who want to defeat my campaign."

In a phone interview October 19 with the Bay Area Reporter, Jones said she and her husband were "doing OK" and that she had no intentions to either quit the mayoral race or step down from the council. Her term does not end until 2020.

"I never imagined it to be this emotionally draining," said Jones of running for mayor. "People say this is just how politics are. But it is not how it should be or needs to be. We should not accept politics as a dirty game. We should change it."

It is that philosophy toward governing that Jones suspects has made her a target of those who want to maintain her hometown's political status quo. Even before the recent spat of negative headlines, Jones has had to contend with questions about her parenting skills, her sexual orientation, and the fact she wears a wig when conducting city and council business.

That issue, at least, should soon be moot, as Jones told the B.A.R. that sometime after the election she is planning a "reveal party" for her real hair, which is currently dyed blue.

"Not everyone has to have salt and pepper hair to be in politics," said Jones.

A certified EMT, Jones currently works as a make-up artist in addition to her council duties. She helped launch a countywide Pride parade in Seaside last year and also continues to attend the Evangelical Baptist Christian church her family has been a member of for four decades.

"My spirituality has definitely changed as I have come to terms as a queer person," said Jones. "I still am a person of faith, even though I have been called a fake Christian."

It remains to be seen how the string of controversies will impact Jones' electoral chances. She comes from a well-known family with deep roots in Seaside; her grandfather was the adjutant general of the 7th division at the now decommissioned Fort Ord, her grandmother was an aide for a number of local politicians, and her mom was a police officer.

"I am trying to win by running a positive race," she said. "If I don't win, I still have two years on the council, so it is not like my work will stop." 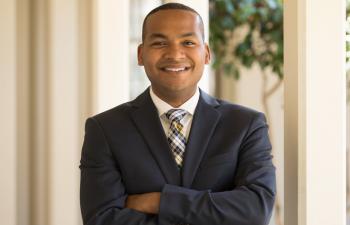 Aiming to join the list of out council members in Monterey County are gay men Tyller Williamson, who is running for a Monterey City Council seat, and Jeffrey Baron, who is seeking a city council seat in Carmel. It is believed either would be the first LGBT person to serve on their city's council.

Williamson, 31, has lived in the area since 2010, having moved there for a job with the Naval Postgraduate School. He graduated from Cal State Monterey Bay in 2013 and is close to earning a master's of business administration from the naval school.

He moved to Monterey in March 2015, and last year bought a home there with his partner of three years, high school history teacher Ivan Quiroz Bautista. He helped launch the Monterey Peninsula Pride event in Seaside and has served on a number of Monterey city commissions.

"I would be the first openly LGBT person and first black person and youngest person ever elected to city council in Monterey," said Williamson, whose father is also part Native American.

He was inspired to seek public office due to his working on Barack Obama's presidential campaigns, both in 2008 when he was living in San Diego, and again in 2012. That year he was given a campaign fellowship and helped organize outreach efforts in Monterey.

It led to his being hired as the deputy regional field director for the Obama campaign in the Bay Area. Williamson relocated to Oakland then San Francisco for several months for the job, which resulted in his working daily in the Castro and coming out of the closet.

His sexuality is what led him to be dismissed from the U.S. Naval Academy after two years, Williamson now believes.

"It is all good," he said. "I am at a new place in my life. I am thankful for that experience occurring, it helped me be where I am at now."

With a devotion to public service his whole life — he is an Eagle Scout and volunteers with various causes — Williamson began to think about running for City Council last year. Like so many first-time candidates, he was inspired to do so as a counteraction to President Donald Trump. He is one of two people running against two incumbent councilmen.

"I saw it as a great way to give back to the city that accepted me, even after coming out. I live with wonderful folks down here," Williamson said.

Some had cautioned him not to be so open about being a gay man as he campaigned, but Williamson said he eschewed that advice, as he is proud of helping revive the county Pride event, which drew 1,000 people this year. While his sexual orientation may be an issue for some, he doubts it is a concern with most voters.

"I am not shoving it or forcing it in people's face but, at the same time, it is a part of my story so I want to make sure it is told," said Williamson, who would like to see an LGBT community center open in the area.
His main concerns he wants to tackle on the council center around homelessness, affordable housing, and traffic congestion. They are all interrelated, he said.

"Everyone on the current council all say they support affordable housing but don't do anything more than be a rubber stamp," he said. "What we really need in Monterey is leadership and someone to work on a strategy inclusive of the voices of the people who live here."

Wanting to address the needs of local residents is what motivated Baron to run for a council seat against the two incumbents up for re-election this year in Carmel. Baron, 54, and his husband, Kevin D'Angelo, bought a home there in 2005 and moved there in 2011 when they retired following successful careers in Silicon Valley.

Baron served on the city's Forest and Beach Commission for two years until 2016. Seeing the needs of residents go unaddressed while development pressures began to transform Carmel's downtown prompted him to seek the council seat.

"Up until recently we had a well-connected, well-integrated community. Now we just find that that is not happening anymore," he said. "I don't think the city really takes care of us."

He has spent the summer knocking on every door in town and is aiming to finish first among the three candidates. As for his running as an out candidate, it doesn't come up much with voters.

"I think it would be silly to say it is not an issue in some places," said Baron. "But we also have a fairly educated community. A lot of people come here to retire like we did."

His being gay hasn't hurt Watsonville District 4 City Councilman Jimmy Dutra, who survived the June primary to run against Santa Cruz County Supervisor Greg Caput. Should Dutra defeat Caput in the race for his 4th District seat, Dutra would become the first openly LGBTQ member on the county board.

He is termed off the City Council this year. Wanting to ensure there remains LGBT leadership in Watsonville, gay retired public school teacher Steve Trujillo entered the race for the open District 7 council seat.

"It is just, I feel with Jimmy leaving the council, I think there needs to be representation from the LGBT community and I think I am the one to do it," said Trujillo.

Trujillo, 65, has lived in the town for nearly four years. After his partner suffered a stroke and moved to Los Angeles to be near family, Trujillo sold his condo in Capitola and moved to east Watsonville.

In addition to wanting to attract more businesses and entertainment options to town, Trujillo said he wants to improve mobility for pedestrians, especially seniors and bicyclists. He would also focus on addressing the city's growing homeless population.

"We need to clean up our public parks and our beautiful sloughs that have been overwhelmed by the homeless," he said.

Running against two better-known female candidates, Trujillo acknowledged he is facing an uphill climb to being elected.

"I am the least well known of the three candidates," he said. "One has been here her whole life and the other moved here many years ago, so it is an uphill struggle."

While BAYMEC declined to endorse Trujillo, it is backing the other out candidates in their races. The national LGBTQ Victory Fund endorsed Dutra and Williamson, while Equality California endorsed Dutra.

Web Extra: For more queer political news, be sure to check http://www.ebar.com Monday mornings for Political Notes, the notebook's online companion. This week's column reported on calls for EQCA's board president to resign.