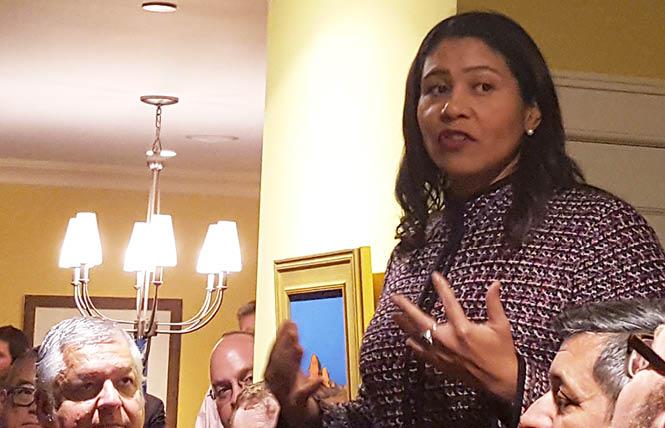 San Francisco Mayor London Breed has declined an invite to travel to Alabama due to the state being on the city's banned travel list for having anti-LGBT laws on its books.

Stephen Benjamin, the mayor of Columbia, South Carolina, and president of the U.S. Conference of Mayors, had invited Breed to Montgomery November 13-14 for the launch of the Mayors and Business Leaders Center for Inclusive Compassionate Cities. The U.S. Conference of Mayors had announced the creation of the center at its meeting in June in Boston.

It is meant to foster stronger ties between mayors and business leaders in advancing equality, diversity, and inclusion. The center is funded by a grant from Walmart.

But in a letter dated October 16, Breed informed Benjamin she had to decline his invitation.

"As you may well be aware, LGBTQ rights in Alabama are under threat, and San Francisco city policy precludes any official travel to states who discriminate against our LGBTQ friends and family members," wrote Breed, who was elected mayor in June and voted for the travel ban as the former president of the Board of Supervisors. "I am proud of that policy and given the hostility of Washington, D.C., there is no better time than now to stand up for LGBTQ rights."

In October 2016, San Francisco leaders banned using taxpayer funds to pay for non-essential travel by city employees to states that have enacted anti-LGBT laws since June 26, 2015. The ban, which also precludes city agencies from entering into new contracts with businesses headquartered in those states, took effect on Valentine's Day in 2017.

As for Montgomery, it received a score of 17 out of 100 on the 2018 Human Rights Campaign's Municipal Equality Index that scores cities and municipalities on how LGBT-friendly their policies are. The city earned points for banning anti-LGBT discrimination in city hiring and contracting, as well for its leaders promoting LGBT policies.

San Francisco has a score of 100 on the MEI.

While Breed noted that the national mayors' group "has taken great efforts to oppose racism and discrimination of all kinds," she nonetheless could not participate in the planned event next month in "The Heart of Dixie" state.

"Unfortunately, I do not agree with hosting any event in a state that does not prioritize the basic principles of justice and equality which defines so many of our great cities, especially San Francisco," wrote Breed.

She added that she looks "forward to working with the U.S. Conference of Mayors in the future to challenge injustice everywhere and advocate for those communities that are in the greatest of need."

"I think it was the right decision," he told the Bay Area Reporter Monday night while attending a reception for Breed and LGBT community leaders. "Good for her."

U.S. Conference of Mayors spokeswoman Sara Durr did not respond to the B.A.R.'s request for comment by press time Wednesday.