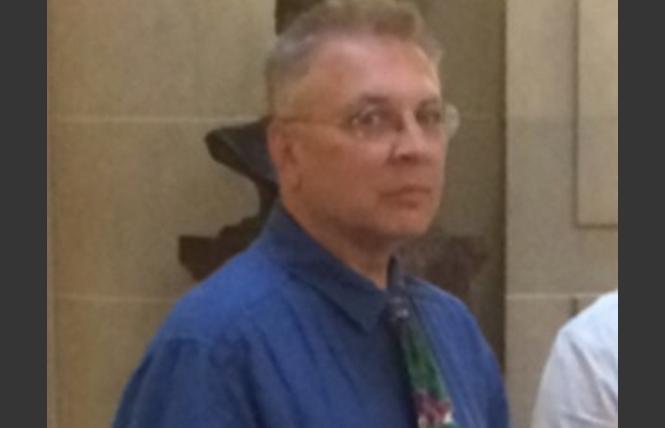 During closing arguments Monday and Tuesday, the prosecution painted Phillips as a brutal killer while the defense shifted blame to a random burglar.

Assistant District Attorney O'Bryan Kenney emphasized the circumstantial evidence against Phillips in his closing arguments, including Phillips' motivation to murder his friend of 10 years. The motive, Kenney argued, was Phillips' desperate love for a Filipino man, Archie Arcaya Fuscablo, and Phillips' need to funnel money to Fuscablo to get him to the United States. As previously reported by the Bay Area Reporter, the two met online and married at City Hall October 30, 2017, just weeks after Fuscablo arrived in the U.S. and two months after Sheahan's death.

Deputy Public Defender Kwixuan Maloof focused on the lack of forensic evidence connecting Philips to the murder and continued his argument that someone else committed the killing and other charges against Phillips.

During the trial witnesses testified that Sheahan died from multiple traumatic injuries to the head caused by blunt force trauma.

Kenney told the jury that Phillips killed Sheahan August 11, 2017, the first time Phillips was seen visiting Sheahan's Bush Street apartment the weekend before the victim's body was found by authorities. That was the day Phillips asked Sheahan for a loan and was denied, leading to the murder, Kenney said.

"He killed a man he knew for years and he did it for one motive," Kenney said. "He had a desperate need to get money to bring a man here he wanted to be with and would stop at nothing to do that."

He continued, "[Sheahan] wasn't going to give him the money. That refusal cost him his life."

The prosecutor also talked about the money the defendant owed to the IRS, Visa, and friends.

Maloof started his closing arguments by repeating what he said at opening statements and described Phillips as being a close, intimate friend who Sheahan trusted and confided in.

"I started off this trial saying [Sheahan] said, 'Mike turned out to be a very good friend, god bless him,' and nothing has changed," Maloof said.

Arguing just the opposite, Kenney showed surveillance video that captured Philips entering and exiting Sheahan's apartment multiple times the weekend before his body was found.

Kenney pointed out that Phillips was wearing gloves every time he entered the apartment, even putting them on as he went up the stairs, after his initial visit on Friday, August 11, which Kenney said was when he brutally killed Sheahan.

The jury saw surveillance video from a Wells Fargo ATM that showed Phillips went to two ATMs and attempted to withdraw cash with Sheahan's ATM card that same Friday.

A recorded phone conversation was played between the San Francisco police Sergeant Domenico Discenza and Phillips. It revealed that Philips lied to the investigator about when he last visited Sheahan, Kenney said.

"This phone call reveals so much," Kenney said in court. "He tries to put on a show, he's acting. [Phillips] doesn't ask about what happened to [Sheahan]."

When Discenza, during an in-person interview, accused Philips of the murder three months after Sheahan was killed, Phillips didn't deny it, according to Kenney.

"When Discenza accused the defendant of murder he doesn't protest," Kenney said. "His reaction is looking at photos, documents, and the evidence and says he didn't remember. He doesn't offer any explanation for the damning evidence against him."

Maloof concentrated on the lack of scientific evidence against Phillips. The victim's blood was not found anywhere in Philips' car, home, storage units, or person, Maloof said.

"Nothing Mike had had a nanogram of blood on it," he said, adding it was a very bloody murder.

Blood that did test positively as Sheahan's was found on a red and black Trader Joe's grocery bag owned by Phillips, which he was seen taking with him during his multiple visits to Sheahan's apartment. This blood, Maloof said, could not be dated, according to medical examiner's testimony.

Additionally, Phillips' DNA was not found in the apartment or on Sheahan's belongings. There were instances of DNA from an undetermined source found on particular items in question, including yellow rubber gloves and a lighter, a medical examiner previously testified.

"Did Mike delete only his DNA, and leave other people's," Maloof said. "We know someone entered James' apartment on August 14 and used the fire escape and committed a brutal crime."

Kenney said that Phillips had a bloodstain on his pants, which was shown in the surveillance video, and it appeared after Philips first entered the apartment. Another stain that resembled blood was also seen on Phillip's pants after a few visits to the Bush Street apartment the weekend before Sheahan was found. Investigators never found the pants, Kenney said, while Maloof said a blood spatter expert formerly testified that the stain could have been consistent with any dark liquid.