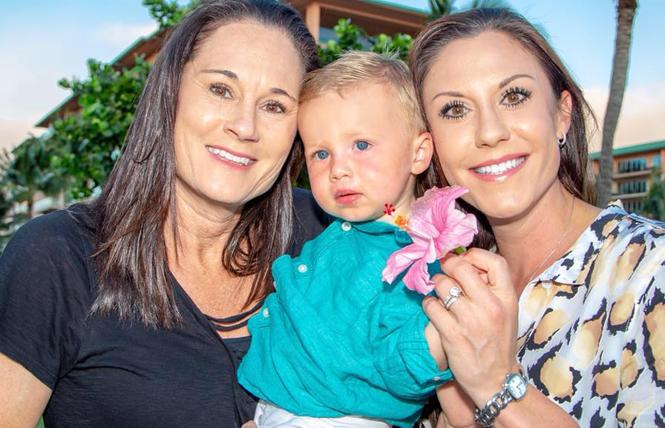 Rare are the star athletes who go on to post-playing stints that are just as brilliant as their first careers. Rarer still are leaders who can effectively fight for causes and changes while flying under the radar, making the battles about the objects of their passions rather than focusing the spotlight on themselves. Count former Stanford basketball star Jennifer Azzi among those unique treasures.

Azzi and University of San Francisco professor Daniel Rascher will moderate a discussion by Golden State Warriors head coach Steve Kerr, Tuesday, October 23, from 6 to 7:15 p.m. at USF as part of the school's Silk Speaker Series.

Azzi led Stanford to a 101-23 overall record during her four years there, and capped her senior season with the NCAA championship, when she swept the Wade Trophy, the Honda Sports Award and the Naismith Award and was named MVP in the NCAA Final Four. She played professionally in Europe and then in the American Basketball League and the Women's National Basketball Association and won gold medals with Team USA in the 1990 World Championships and the 1996 Summer Olympics.

In 2010, Azzi became head coach of the USF women's basketball team for five seasons, leading the Dons to an NCAA tournament appearance. In 2016, before announcing her coaching retirement and while introducing gay Warriors President and COO Rick Welts at an anti-defamation event, Azzi casually came out as lesbian. No big build-up, no news conference, no pre-planned media blitz — just an impromptu announcement she said was inspired by Welts' example.

"It's not something I was keeping a secret," Azzi, 50, told the Bay Area Reporter. "At that point, it was almost accidental."

"You don't realize the impact you can have on people's lives just by being open about who you are," Azzi said of her decision to come out. "At first we got calls and messages from friends who were worried and excited and we were worried what the reaction might be, but then we got messages from people in their 60s and 70s, people we didn't even know, thanking us."

Azzi left college coaching, but she never really left basketball or USF. She holds an annual youth basketball camp in the North Bay, works in international development in the NBA, and after retiring from coaching she became USF's director of special initiatives, which includes presenting the Silk Speaker Series — which now gives her the chance to present Kerr's appearance.

"I think he's one of the greatest coaches of all time," Azzi said of Kerr. "He and his values are so in line with the University of San Francisco and vice versa. He uses his platform to make change and speak for others who might not have a voice. I met him a long time ago, but when we both played in San Antonio — that's when we both got to know each other quite a bit more."

Tickets for the Silk Series event are $25 and can be purchased at http://www.usfca.edu/calendar.

USA Gymnastics' struggles continue
Sometime in a galaxy far, far away, USA Gymnastics may eventually get out of its own way and do something right.

In the aftermath of the sexual predator scandal involving former team doctor Larry Nassar's decades-long abuse of female athletes enabled by fellow gymnastics officials, the federation fired its former head and named Republican former Congresswoman May Bono as its interim CEO. Bono was with a law firm when it was advising USA Gymnastics on how to cover up investigations into Nassar and shortly before being appointed by the gymnastics federation she posted a tweet showing her blacking out the Nike logo on her golf shoes — an obvious signal of displeasure against the sports apparel manufacturer for using Colin Kaepernick in its ad campaign. Critics have called for gymnastics and other Olympic federations to be more receptive to athletes' voices, and now gymnastics is hiring a person opposing one of the most effectively outspoken athletes on the planet.

This is a PR disaster in progress.

"Mouth drop," tweeted star gymnast Simone Biles, referring to Bono's Nike tweet. "Don't worry, it's not like we needed a smarter usa gymnastics president or any sponsors or anything."

According to reports, Bono quickly tweeted her "regret."