Commentary: Resist: On resistance and accommodation 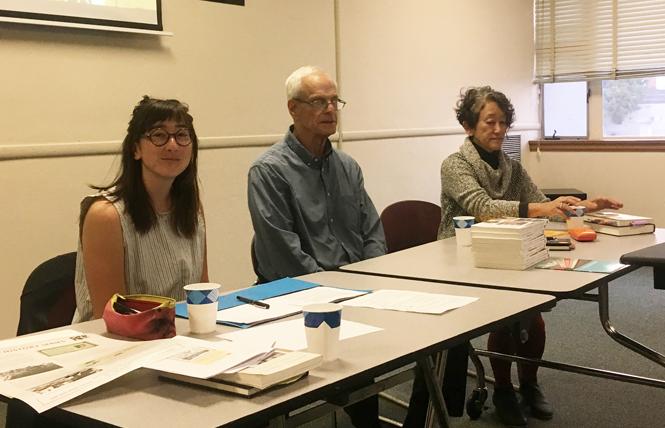 Lucy Asako, left, Leilah Danielson (on screen), Charles Wollenberg, and Karen Tei Yamashita participated in a panel October 10 on "The Question of Resistance and Accommodation" at the Oakland Library. Photo: Christina DiEdoardo

Other than the act itself, perhaps the most disgraceful aspect of the internment of Japanese-Americans in the Bay Area and elsewhere by the federal government in 1942 was the fact that most who were not of Japanese ancestry did absolutely nothing to protest, much less stop, the roundups of their friends and neighbors.

Most, but not all. At a roundtable discussion Wednesday, October 10, at the Oakland Public Library, Karen Tei Yamashita, a professor of literature and creative writing at UC Santa Cruz, shared excerpts from her book "Letters to Memory." While the book uses archival resources from the Yamashita Archives at UCSC — including letters from and to her aunt, Kiye Yamashita — it's far more than a personal chronicle.

"Perhaps my family thought I would write a family history," Yamashita said with a chuckle. "But I was more interested in Japanese internment and its relation to the struggle for civil rights in America."

That story brought her aunt into contact with Caleb Foote, then a young member of the Society of Friends (Quakers). Ultimately, Yamashita said, her aunt was able to leave one of the internment camps and worked for the Quakers' Nisei Education Project, which in turn enabled several thousand Nisei — the American-born children of Japanese immigrants — to be freed from custody to finish their education.

According to Yamashita, Foote wanted to do far more. He was a strong advocate of nonviolent direct action and lobbied the Quakers to assemble a group of young people to block the gates at what was then the Tanforan Racetrack in San Bruno (which was the first stop for many Nisei internees) and the Topaz internment camp in Utah. To Foote, it made little sense to ask more Nisei to follow the example of Fred Korematsu and others who fought internment in court if white people — who created the problem in the first place — weren't willing to put themselves on the line as well.

"I wonder what might have happened if 25 young people had laid their bodies across the gates of Tanforan or Topaz," Yamashita mused.

Even though his direct action plan was stymied, Foote went on to write a 1943 pamphlet "Outcasts! The Story of America's Treatment of Her Japanese American Minority," which deemed internment the equivalent of the Nazi racial laws at Nuremberg the United States was supposedly fighting to destroy. After doing six months in a federal prison for claiming conscientious objector status on humanist, rather than religious grounds, Foote went on to earn his law degree and become a law professor at both the University of Pennsylvania and at UC Berkeley until his retirement in 1987. He died in 2006.

Other participants on the panel included Leilah Danielson, a history professor at Northern Arizona University, and Charles Wollenberg, author of "Rebel Lawyer: Wayne Collins and the Defense of Japanese American Rights." Collins helped found the Northern Californian chapter of the American Civil Liberties Union and ironically, given the refusal of the ACLU's national board to challenge internment, went on to represent prominent Japanese-Americans from Korematsu to detainees at the Tule Lake camp.

The roundtable, which was sponsored by the History Room at the Oakland Library and California Humanities in cooperation with the National Endowment for the Humanities, was timely for another reason, as October 11 marked the 112th anniversary of a decision by the San Francisco Board of Education to segregate Japanese-American children in the city's schools. The move not only caused unrest locally, but — for a time — placed Washington and Tokyo on a road to war, which was avoided only because the board backed down in exchange for a dramatic reduction in Japanese immigration under the so-called Gentleman's Agreement of 1907. While this defused the situation temporarily, the racism that gave rise to it would remain unaddressed for decades to come and ultimately caused the deaths of millions of Japanese and hundreds of thousands of Americans once World War II broke out.

As in Foote and Collins' time, so in our own — when there are fewer people with the courage to stand up to the system than there are to go along with it, death and suffering usually follow.

Zionist Lawfare & the Boycott Movement seminar
At 3 p.m. Sunday, October 21, at 518 Valencia Street in San Francisco, Palestine Legal, the Palestinian Youth Movement, the Center for Political Education, the San Francisco chapter of the National Lawyers Guild, and the Arab Resource and Organizing Center will host a seminar on "Zionist Lawfare & the Boycott Movement: Solidarity & Resistance." Lawfare is best known locally for its litigation against San Francisco State University, which accuses SFSU officials and staff of tolerating anti-Semitism on campus after students disrupted a speech by Jerusalem Mayor Nir Barkat in 2016. Palestinian activists and others contend Lawfare's real purpose is to silence critics of Israeli policy through threatened and actual litigation.