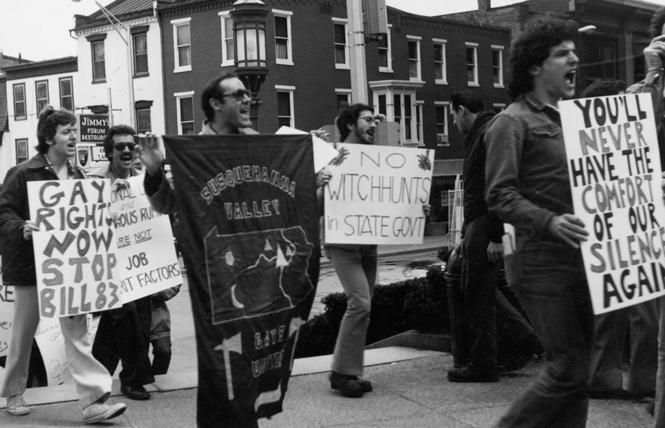 In April 1975, a groundbreaking event occurred in the fight for gay and lesbian equal rights.

In Pennsylvania, a state not generally known for liberal politics, a courageous and progressive governor, Milton J. Shapp, signed an executive order that banned discrimination in state government. This was the first state in the nation where a governor had taken such action. It would be another four years before another state would take such a bold move.

In Pennsylvania, activist groups had sprung up throughout the state. Gay activist Mark Segal, now the publisher of the Philadelphia Gay News, had been active in the Gay Liberation Front in New York, and gained notoriety as founder of the Gay Raiders, famous for their "zaps." As Segal's visibility and reputation grew, he soon brought his urgent feelings of activism back home to Philadelphia, wanting to make an impact politically.

Segal knew that he had to do something out of the box, so in 1974 he sent a letter to the governor of Pennsylvania, Milton J. Shapp, and requested a meeting.

"Up until that point," Segal said in an interview, "no governor anywhere in the nation had met with gay activists. There was not one elected official anywhere that had mentioned gay, lesbian, or homosexual. If anything, if they saw a gay person coming toward them, they would have run the other way."

Shapp had a reputation for being progressive. His businesslike approach to government, strong sensitivity to the plight of the disadvantaged, along with the overriding conviction that government must serve as an advocate for all people, made him enormously popular. He was an individual on whom one could take a chance — and that is exactly what Segal did.

Segal went for the brass ring, saying, "Governor, gay men and lesbians are discriminated against in almost every part of the state government." Shapp then asked, "How can we change that?" Segal replied, "Create a commission to explore these problems and find solutions." The governor immediately responded: "Let me consider the options and get back to you."

After the conversation, the governor turned to his assistant and asked that the doors be opened to allow the press corps to enter. He wanted the meeting on record. Questions were asked of the governor — too many to answer. Shapp said to the reporters: "We had a good meeting," adding, "It's a start." Photographs were taken of the governor and Segal. Those were the first photographs of any governor in the United States meeting with a gay activist, and the following morning they were in every newspaper in the state. Shapp's decision to meet with Segal was a groundbreaking event. What happened next was even more important. 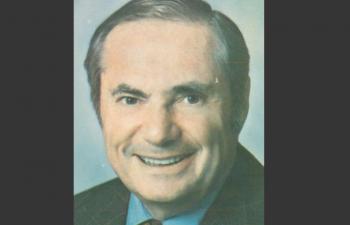 Task force convened
In late 1974, Shapp convened a task force to study issues of importance to the gay community. Chaired by Terry Dellmuth, Shapp's special assistant for human services, and Barry D. Kohn of the Community Advocate Unit in the Department of Justice, the task force was made up of gay activists throughout the Commonwealth.

One of the first requests the gay and lesbian activists made was to ban discrimination in employment on the basis of sexual orientation. Shapp was powerless to do that on behalf of the entire Commonwealth without the state Legislature passing legislation. He knew that would be an impossible fight. As governor, however, he did have administrative control over policies in state government. On April 23, 1975, Shapp made history, by issuing the following landmark executive order:

"In furtherance of my commitment to provide leadership in the effort to obtain equal rights for all persons in Pennsylvania, I am committing this administration to work towards ending discrimination against persons solely because of their affectional or sexual preference.

"Terry Dellmuth, my special assistant for human services, and Barry Kohn, director, community advocate unit, Pennsylvania Department of Justice, are hereby assigned to review and monitor this effort. They will work with state agencies and private groups to further define the problem and make recommendations for further action.

State departments and agencies are instructed to fully cooperate within the effort to end this type of discrimination."

With the single stroke of a pen, Shapp signed the first anti-discrimination order for sexual minorities in the nation. No other state or governor had taken such a bold move for gay and lesbian equal rights.

On February 12,1976, Shapp formalized the task force by issuing another executive order creating the Pennsylvania Council for Sexual Minorities. He ordered each department to appoint a top official to be member of the council along with 18 gay and lesbian activists that he would appoint. The council immediately started working with the 27 state agencies providing speakers and hosting educational seminars on employee education and hiring practices. The council also issued a policy preventing discrimination based on sexual orientation in hiring, employment, housing, credit, or any related matters to the 27 state agencies.

Nolan introduced Senate Bill 83, which would have denied employment as a policeman, prison guard or in juvenile or mental institutions to anyone convicted of admitting to deviant sexual intercourse as defined by state law. The law passed both houses of the Legislature, but was vetoed by the governor. The bill was aimed at homosexuals, but could have easily applied to heterosexuals. It also likely would not have withstood a constitutional challenge if the bill had been passed, since it was in clear violation of the equal protection clause under laws guaranteed by the 14th Amendment.

Not long after the council was created, Ethel D. Allen, the first African-American elected to the Philadelphia City Council, made a special request of the governor, to issue a proclamation in support for gay Pride week in June 1976. The governor did so, and the reaction was swift and vociferous. The Legislature immediately issued a rebuke to his proclamation. A resolution was offered in Pennsylvania's House of Representatives that put lawmakers on record as opposed to Shapp's proclamation because it was "contrary to the morality and laws of the Commonwealth." Many people found it easier to accept the notion that the governor supported civil rights, but not that he would support gay pride. They saw it as proselytizing or a level of approval that was not appropriate for a governor.

Shapp was outspoken on the issue of gay and lesbian equal rights. The struggle and fight for LGBTQ rights has had many valiant and courageous leaders. Shapp, who died in 1994, was one of the first political leaders who took a stand, stood by his beliefs, and enacted change that advanced gay rights. He helped pave the way for other individuals and politicians to follow.

William Burton is a writer currently working on the manuscript for a book on LGBT history in central Pennsylvania that is anticipated to be published next year by Penn State University Press.