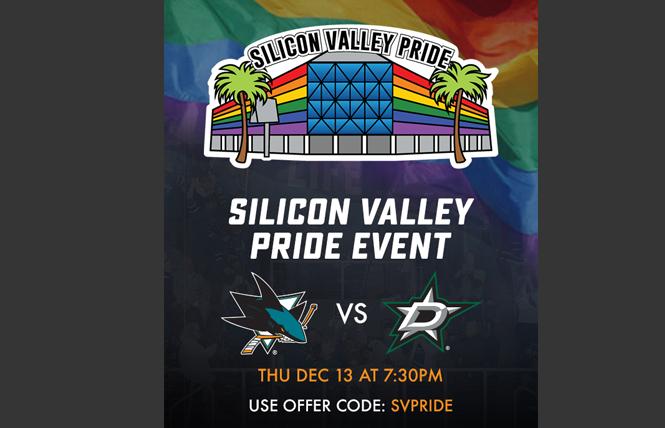 Major League Baseball playoffs are in full swing and every week NFL teams add more bodies to the injury lists. Yes, it's that time of year when basketball and hockey will bridge the gap between the end and start of baseball, along the way faithfully offering us various interpretations of Pride, diversity, or inclusion nights. Many local teams are still finalizing schedules. Some do not yet have particulars but most major local college teams say they plan to offer inclusive-themed events — and the Sharks and Warriors say they have plans to build on their previous efforts. Here's a look at where programs currently stand:

San Jose Sharks: The Sharks held an Equality Night in 2016 and an inclusive Hockey is for Everyone event in 2017. This season they plan two inclusion-themed events.

"A portion of the ticket proceeds will be donated back to Silicon Valley Pride to promote local programs," Stuetzel said.

"We are utilizing the same great assets and tools to create a unique experience that we do for all of our group sales initiatives," Stuetzel said. "In this event's first year, it won't be a full-scale arena activation. We do see this as a great opportunity to kick off a great relationship with the community and use our assets. We truly hope to grow this event into a full-blown Pride Night in the future."

The Hockey is for Everyone night will be March 30, when the Sharks play the Las Vegas Golden Knights.

"This event aligns with the NHL's diversity and inclusion campaign and, in the past, has featured Pride tape on sticks during warm-ups, as well as a partnership with You Can Play," Stuetzel said. "We have LGBT integration in our Hockey Is For Everyone night, but as part of an all-encompassing effort in conjunction with the NHL's diversity and inclusion campaign. Over the past two years we used elements from the nonprofit of the night package and partnered with the Sikh Gurdwara, which really encompassed the Hockey is for Everyone motto. This event is more of a marketing driven, full-arena innovative, and tickets can be purchased on Ticketmaster. There is currently no special ticket promotion/code for this event."

Golden State Warriors: The Warriors said they will host an LGBTQ Night Friday, November 2, when the Warriors host the Minnesota Timberwolves in a 7:30 p.m. game.

The franchise first held an LGBT Night in 2010, with SF Cheer and the gay men's chorus performing and ticket proceeds benefited the SF Rockdogs basketball team and Positive Resource Center.

"This year, we're aiming to develop a game experience and curate content that will resonate with, excite, and celebrate the LGBTQ community that attends the game," Goodwin said. "The Warriors have partnered with Bayview-Hunters Point Center for Arts and Technology (BAYCAT), a nonprofit social enterprise that provides access, education, and employment for low-income youth, youth of color and young women. BAYCAT, in partnership with the Warriors, will produce a video that highlights and celebrates the LGBTQ community and their allies, focusing on the importance, impact and values of allies. The video will identify our GSW allies and supporters, and will include tips and ways to be an ally."

Stanford: Stanford just finalized its season schedule for men's and women's basketball but has not yet assigned special event themes.

"In the past, we have done 'Equality' games, which have included messaging promoting equality for all people," Tommy Gray, executive associate athletic director, told the Bay Area Reporter. "We are considering similar programming this season, but have yet to finalize our plans given the timing of our schedule."

UC Berkeley: Women's basketball spokeswoman M.C. Barrett said staff were just beginning to discuss promotional plans but would definitely offer an LGBT-welcoming inclusion event such as the school has offered in the past.

University of San Francisco: The university plans to hold two Pride events during the women's basketball season. A USF Pride Night T-shirt giveaway will be held Saturday, December 15, when USF plays a 2 p.m. game against UC Davis; and a USF Pride flag giveaway will be held Thursday, January 17, in conjunction with a 7 p.m. game against St. Mary's.

Tickets are available at www.usfdons.com. Questions regarding the events can be sent to marketing director Vinnie Longo at vlongo@usfca.edu.

Olympic ripple
There's been a notable disconnect in past Olympics regarding the human rights components that the movement is supposed to champion. The International Olympic Committee puts words to paper calling for inclusion and acceptance of everyone by host cities and countries, but as often as not hosts have laws that discriminate against transgender people, gays, and women; "undesirables" are trucked out of camera view; and low-income neighborhoods are wiped away to make room for Olympic villages and venues.

A hopeful bucking of at least the LGBT component of that trend appears to be happening in Tokyo, host of the 2020 Summer Olympics.

The law states, "This act upholds the goal of the Tokyo Metropolitan Government to make Tokyo a city that upholds the human rights values of banning any sort of discrimination as stated in the Olympic Charter. The Tokyo Metropolitan Government, citizens, and enterprises may not unduly discriminate on the basis of gender identity or sexual orientation."

Japan has no such nationwide protections.

"Japan is proud to host a human rights-friendly Olympics in 2020, and the government should use the next two years to pass laws and carry out policies that comprehensively protect everyone," said Kanae Doi, the Japan director of HRW.