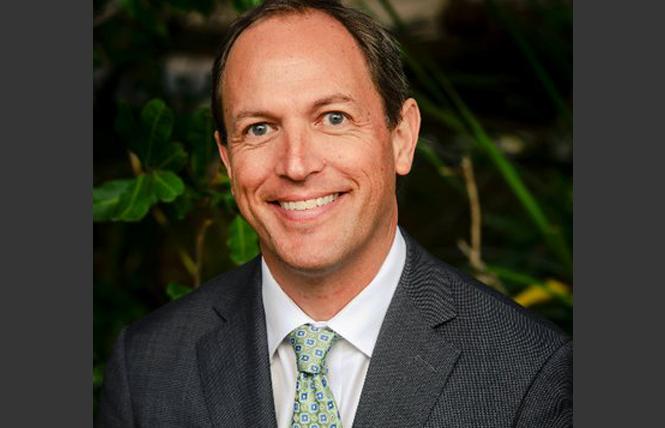 After not supporting legislation that protects LGBT foster youth, Assemblyman Brian Maienschein (R-San Diego), lost the endorsement of Equality California in his race for re-election in November.

The state's largest LGBT lobbying group announced Thursday, October 4, it no longer supports Maienschein after he "failed to repeatedly support" Assembly Bill 2119, according to an EQCA news release.

In March, before Assembly votes were taken on the foster care legislation, EQCA had dual endorsed Maienschein, a straight man, and his lesbian opponent, real estate agent Sunday Gover. The withdrawal of EQCA's endorsement means Gover is the only EQCA-backed candidate in the 77th Assembly District race.

As previously reported by the Bay Area Reporter, Maienschein, a former San Diego city councilman, has consistently received high scores from EQCA since being elected to the Assembly in 2012.

Maienschein did not respond to a request for comment.

The suit arose after the city of Philadelphia in March learned that two of its foster care providers had declined to license same-sex partners who wanted to become foster parents. Subsequently, the city stopped referring children to those agencies. The Catholic Social Services and four of its foster parents, represented by the Becket Fund for Religious Liberty, sued the city. They are asking the court to order the city to renew the agency's contract, according to American Civil Liberties Union Philadelphia website, which intervened in the suit.

"Couples seeking to build healthy, loving families by bringing a child into their lives should not have to worry about whether they will be met with discrimination based on whom they love," said Becerra in a news release. "While everyone has a right to exercise their own religious and moral convictions, no one has a right to force those religious convictions upon someone else."

According to the news release, the states argue in the brief that anti-discrimination laws like Philadelphia's Fair Practices Ordinance were passed to protect LGBT individuals from discrimination in the foster and adoption care processes.

A passage from the brief states that it is in the public interest "to shield people who have come forward to perform one of the most laudable acts in our society from degrading and discouraging treatment; to safeguard the welfare of the children who so need their care; and to meet the government's own obligations to provide public services on a nondiscriminatory basis and act in the best interests of children."

This move comes a few months after Becerra added Oklahoma to the list of restricted states for state-funded and state-sponsored travel under Assembly Bill 1887. The bill, authored by gay Assemblyman Evan Low (D-Campbell) and passed in 2016, bans state-funded travel to a state that has passed a law after June 26, 2015 that discriminates against LGBT people.

As previously reported by the B.A.R., Oklahoma was added to the list on the first day of Pride month after Governor Mary Fallin (R) signed an anti-LGBT bill into law in early May that allows child welfare organizations — including adoption and foster care agencies — to deny qualified LGBTQ couples and other individuals seeking to adopt or foster a child on the basis of religious beliefs. The bill also would allow the denial of interfaith couples, single parents, and married couples in which one prospective parent has previously been divorced. The bill is now the first anti-LGBTQ state bill signed into law in the country this year. It takes effect in November.

With the addition of Oklahoma, the list now includes nine states. The eight others are: Texas, Alabama, Kentucky, South Dakota, Mississippi, North Carolina, Tennessee, and Kansas.
The city of San Francisco maintains a similar travel ban policy list. The Board of Supervisors voted to include Oklahoma to the list at its June 4 meeting. The list now mirrors that of the state's, though the ban for Oklahoma starts next month.

Hispanic civil rights organization announces LGBTQ committee
The League of United Latin American Citizens announced Monday, October 1, that it launched its first National LGBTQ Affairs Committee. The 89-year-old organization has been a longtime supporter of pro-equality policies for LGBTs in the Latino community.

A news release circulated by the nonprofit said newly elected President Domingo Garcia is "moving quickly to include more voices at the national level." He selected longtime member Jesse Garcia to lead the efforts of the LGBT group as a committee affairs chair.

"It is a great honor to serve," said Jesse Garcia in a news release. "Twelve years ago, I joined others to begin the conversation about LGBTQ acceptance in our Latino community. We had honest talks at LULAC meetings and conventions about our civil rights, and members across the nation listened."