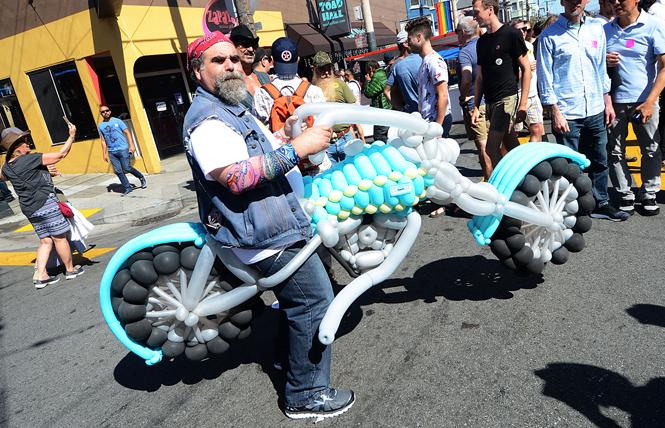 New food offerings and local artisans will be featured this Sunday, October 7, at the 45th annual Castro Street Fair.

The neighborhood event, which has struggled in recent years with declining attendance and participation by LGBT civic groups, has taken several steps to reverse both trends this year. It reduced the cost for members of the Castro Merchants business association to rent booths at the fair.

And it has brought in different food vendors to appeal to current tastes. Among the offerings will be vegan snacks, toffee, and cookies made in San Francisco by Mojo Bakes and the popular gay- and black-owned Cee's Fried Chicken, started two years ago by Cee Freedman.

Classic street fair foods like burgers, hot dogs, and french fries will be returning, with the Berkeley-based Noonie's Catering promising to be dishing up its crowd-pleasing loaded fries. The food court will be located on 18th Street between Collingwood and Diamond.

On tap at the beer booths this year will be a selection of Pilsners and ales from Berkeley brewer Trumer Pils and Michigan-based Founders Brewing Co. A donation of $5 to $10 at the gates results in a sticker that is good for $1 off alcoholic drink purchases.

As for local artisan vendors selling their wares at the fair, they run the gamut from collage digital prints designer Jennifer Clifford, whose studio is in the city's North Beach district, and San Francisco artist Jamai Lowell's clothing brand Animal Instincts to the Oakland-based Litwick Candles and Bottle of Clouds, which makes laser-cut and hand-painted wooden jewelry.

This year's fair doesn't have a theme, and instead, takes inspiration for its map, poster, and program design from the late gay Supervisor Harvey Milk, who founded the event as a way to promote the then-burgeoning gayborhood. His caricature can be seen standing on a soapbox holding a megaphone on the fairgrounds map designed by Josh Koll, a gay San Francisco resident who is a designer, illustrator, and photographer.

The program and poster for the fair both feature Milk's famous quote, "Hope Will Never Be Silent," which is now emblazoned in neon lettering on the facade of 400 Castro Street adjacent to Harvey Milk Plaza above the Castro Muni station.

"This year, we wanted the poster art to be about the Castro as a whole," explained Lopez about the design.

Like last year, the envelope of the fair has shrunk and Market Street will remain open to vehicular traffic. The main entrance gate into the fair will be located at Jane Warner Plaza at the corner of 17th, Castro, and Market streets.

The main stage, with headlining act Big Dipper, the Chicago-born, Los Angeles-based bear rapper who's also known as Dan Stermer, will be at Castro and 19th streets. The country western Sundance Saloon returns to 18th Street between Hartford and Noe, while a DJ dance area takes over the parking lot off 18th Street behind the Walgreens.

Last year's fair raised $55,000 for local charities, and organizers hope to exceed that amount for this year's 15 nonprofit beneficiaries. The fair also pays for new rainbow flags to fly on the flagpole located at Harvey Milk Plaza.

For more information about this year's event, and the full entertainment lineup, visit its website at https://castrostreetfair.org.