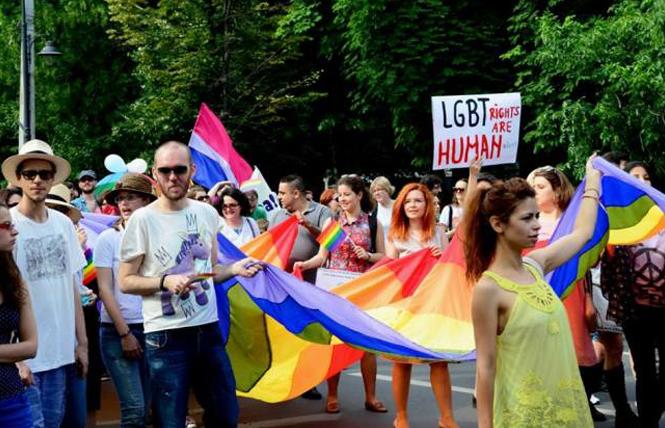 The court's ruling contradicts itself as the same court last month approved an anti-same-sex marriage referendum that will go before Romanian voters October 6-7.

The referendum would amend the country's constitutional definition of marriage from "spouse" to "a man and a woman."

The court ruled that same-sex couples are entitled to a private life and a family life, the same as heterosexual couples. The decision cited Article 7 of the Charter of Fundamental Rights of the European Union, Article 8 of the European Convention for the protection of Human Rights and Fundamental Freedoms, and Article 26 of the Romanian constitution.

"It says same-sex couples should have the same legal rights as heterosexuals. The court says a same-sex family is worth as much as a heterosexual family," Teodora Ion-Rotaru, a representative of Accept, a Romanian LGBT rights group, told the Associated Press.

The ruling is derived from the European Court of Justice's landmark decision in July. That court ruled in favor of Romanian Adrian Coman and his American husband, Claibourn "Clai" Robert Hamilton, who were denied spousal residency in Romania following their 2010 marriage in Belgium.

The same decision spurred support for the Romanian constitutional referendum.

The controversial referendum is backed by the conservative, right-wing, 23-member Coalitia pentru Familie (Coalition for the Family) and the Eastern Orthodox Church. Supporters gathered 3 million signatures on a petition to Romania's government to redefine family in the constitution.

According to the Southern Poverty Law Center, the coalition is supported by right-wing American organizations.

The SPLC chronicled (https://www.splcenter.org/hatewatch/2018/09/27/american-anti-lgbt-groups-battling-same-sex-marriage-romania) the rise of the bill from its roots in 2015 and believes that Romania is a testing ground for American anti-gay and anti-abortion organizations to influence European politics.

The referendum is opposed by representatives of Amnesty International and the European Commission on Sexual Orientation Law, a branch of the International Lesbian, Gay, Bisexual, Trans and Intersex Association.

If passed, the referendum could result in making it impossible to protect same-sex unions in the future, according to representatives of the organizations.

Opponents of the referendum are asking people not to vote this weekend.

The referendum needs 30 percent of the popular vote to be valid.

Anti-gay sentiment
Debates leading up to the vote have been heated.

Last month, the image of a drag queen adorned in a Nazi uniform with a rainbow flag armband in place of a swastika graced the cover of the leading Romanian newspaper, România Liber?, with the headline "New LGBTQ order."

The article argued that progressive LGBT advocates were behind religious discrimination. It was published online without the image, but with the subhead, "Equality, but not for Christians."

The cover image and the article brought swift criticism from LGBT and human rights advocates.

LGBT activists in former British colonial countries in Africa, Asia, and the Pacific Islands are already working to see how they can apply the ruling to current and future court cases to decriminalize homosexuality in their respective countries.

Botswana, Kenya, and Uganda are among the African nations that have cases in process challenging anti-sodomy laws in the penal codes.

Additionally, Pakistani, Singaporean, and Sri Lankan LGBT activists are exploring their options and launching campaigns to strike down the anti-sodomy laws in their respective countries, modeling the success of Indian LGBT activists.

"We were all following that case very closely. And the most important thing to come out of that decision is that, actually, these laws can be ordered down," Alan Msosa, a Malawian academic at York University in Canada, told the Mail and Guardian.

"It shows that decriminalization can happen in the former British colonies," he added.

He noted that India's approach provides lessons for how African LGBT rights advocates can approach courts when pushing for LGBT rights, particularly by being detailed in response to anti-gay claims, such as pedophilia.

"There are a lot of lessons we can learn here in Uganda from that case," Muganzi said.

"It gives the LGBT community here in Uganda a stepping stone, knowing that, if it can be struck down in former colonies, then it can be done for us [too]," she added.

In Kenya, hearings about the country's laws criminalizing LGBT people had ended before the India decision. However, the court is aware of the ruling and included it in its judicial review, said Kari Mugo, operations manager at Kenya's National Gay and Lesbian Human Rights Commission. The commission petitioned Kenya's high court to repeal sections of the penal code that criminalize homosexuality.

Botswana also has a case challenging its anti-sodomy law, Section 164.

The Southern Africa Litigation Center is representing a client in the case, claiming the law "violates his basic constitutional rights."

Tashwill Esterhuizen, the legal advocacy group's LGBT and sex worker rights program lawyer, and his team are studying India's supreme court decision to see how they can apply lessons to their case, he told the Mail and Guardian.

"So often, we get accused of being Western or having a foreign agenda," Mugo told the paper. "So, to have a court in the Global South, and from a country as important as India, decide on this in this way is really crucial. It shows that these old colonial laws have no place in our societies."

The second legal challenge against Section 377A of Singapore's penal code was filed by Johnson Ong, 43, who goes by DJ Big Kid, September 12.

Ong appeared in court to present evidence for his case at a pre-trial hearing September 25, reported the Associated Press. The Singapore court gave Ong and his attorney, human rights lawyer Eugene Thuraisingam, until December 3 to file more evidence for his challenge, according to the China Global Television Network.

Ong's case is the second to challenge the law. Another case, filed by a Singaporean gay couple who claimed the law violated their constitutional rights, was rejected by the Court of Appeal, the country's highest court, in 2014.

A petition to repeal Section 377A was submitted to the Singaporean government September 28. The petition, started by film and theater director Glen Goei and trainee lawyer Johannes Hadi, gathered 44,650 signatures from Singaporeans and permanent residents. It has strong support from academics, business figures, and former nominated Members of Parliament.

However, opponents have submitted their own petition backed by religious groups and signed by 108,977 people.

A similar campaign to do away with the law failed in 2007.

However, proponents of repeal have been encouraged by Singapore government leaders.

Janadas Devan, chief of government communications, said, "377A is a bad law," and stated that it would go away "sooner or later." However, he clarified his remarks, later stating that for now, due to the popular opinion, the law should "remain on the books."

Sri Lankan LGBT rights organization Equal Ground launched a community discussion this week with human rights and LGBT advocates and lawyers to explore options to strike down the country's anti-sodomy law and other anti-LGBT laws.

Pakistani LGBTs told the Asian Times that India's ruling allows them to "dare to dream."

Section 377 continues to be the law in Pakistan, which was also ruled under the British Raj along with Bangladesh and India and is now a member state of the Commonwealth. However, the country's penal code also adheres to Islamic Sharia law under Hudood Ordinances that were added to the code in 1977 under Islamist dictator Zia-ul-Haq, reported the newspaper.

Punishment for homosexuality is stoning to death.

Pakistan has also taken up a resistant stance toward the United Nations regarding LGBT rights.

Despite advancements made by transgender individuals in recent years, the majority of LGBT Pakistanis remain hidden, using alias when connecting online.