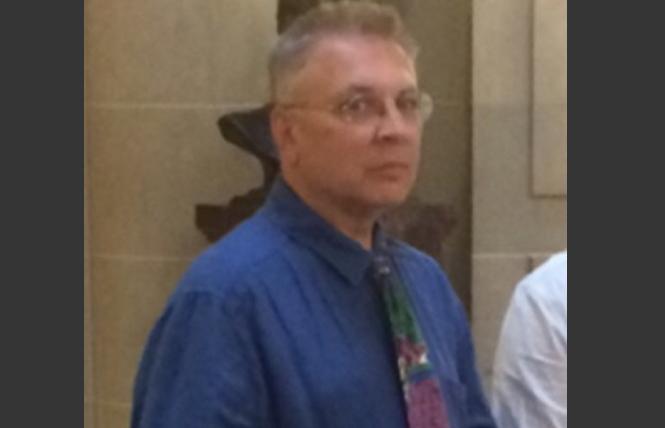 Forensic and other scientific evidence was the main topic for witnesses in the Michael Phillips murder trial in San Francisco Superior Court October 1-2. Prosecutors are nearing an end to calling witnesses and the defense is expected to start presenting its case soon.

Assistant District Attorney O'Bryan Kenney has argued there was no one else involved in the murder, while Phillips' attorney, Deputy Public Defender Kwixuan Maloof, told the jury during his opening statements in August that someone else was there.

A lighter and pack of cigarettes were found in Sheahan's Bush Street apartment after his death, and Maloof said that neither Sheahan nor Phillips smoked, indicating a third person was present.

Luke Rodda, Ph.D., chief forensic toxicologist at the San Francisco Medical Examiner's office, took the stand October 1. Rodda testified that blood and urine samples were taken from Sheahan after his death. In the blood sample morphine, a Valium-type drug, an antidepressant, and caffeine were found. The same was found in the urine, along with an antihistamine.

No nicotine was found in either sample, and Kenney asked if this meant that Sheahan did not smoke.

"This suggests the subject did not smoke recently, or did not consume large amounts of smoke," Rodda testified. "You cannot say for certain that a person didn't consume something completely."

A criminalist with the San Francisco Police Department, Amy Lee, also testified about samples of bodily fluids taken as evidence from Sheahan's apartment. Lee's job is to screen evidence and analyze it for DNA.

On Tuesday, she testified that a pair of yellow gloves tested positively for Sheahan's blood and the DNA of another, unknown male contributor. The DNA sample from the second contributor was so small that a conclusion could not be made as to exclude or include Phillips as the contributor, according to Lee.

Kenney asked if the secondary, minor source of DNA on the lighter could have been passed from Sheahan's hand by previously touching the hand of someone else or from the lighter sitting on a couch that had come in contact with a person. Lee answered yes this was possible.

Two samples from a black shoe tested positively for Sheahan's blood and one sample showed DNA of another male, though the results were inconclusive.

Kenney again asked if this DNA could have gotten on the shoe by walking on the street. Lee answered yes.

Lastly, a Trader Joe's grocery bag that belonged to Phillips and was mentioned in opening statements was also tested. The interior of a red and black bag tested positively for Sheahan's blood.

A member of the defense team declined to tell the Bay Area Reporter whether Phillips plans to testify.

Other witnesses who took the stand included a man who bought paintings from Phillips on eBay, Peter Schildhause.

"He told me about a Filipino young man he was deadly in love with," Schildhause said. "[Phillips] said he had a loving, wonderful relationship with this man."

As previously reported by the B.A.R., Phillips and Fuscablo met online and married at City Hall October 30, 2017, just weeks after Fuscablo arrived in the U.S.

"He asked me to lend him money to sort out a situation with this Filipino man," Schildhause said.

Schildhause gave Phillips $1,000 in cash that the defendant never paid back.

Previously, Kenney told the jury that the motivation behind Phillips' decision to kill Sheahan was Phillips' need for money to help Fuscablo, pay off loans, get a visa, and cover other costs. Kenney also told the jury that Phillips was in major debt to the IRS, Visa, and friends.