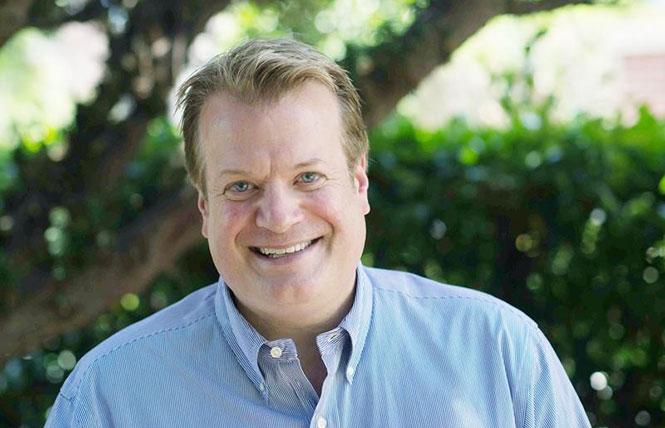 Ichizawa, who goes by Ichi, works for a local Japanese-language weekly magazine, while Oddie is the district director for state Assemblyman Rob Bonta (D-Oakland). The men's relationship blossomed after first meeting online.

"We met how a lot of people meet these days — on the internet," said Oddie, who was first elected to his council seat four years ago.

Unlike most newlyweds, the couple did not publicize their nuptials in the wedding section of their local newspaper. Except for those invited to the ceremony, Oddie had kept his being a gay man a secret from most people.

When he launched his campaign for re-election this November, his biography on his campaign website did not mention his husband. It merely referred to Oddie as being the proud father of "two dynamic and accomplished young women." He has been divorced from their mother since 2013.

But a health scare four days prior to his wedding prompted Oddie to begin thinking about how to publicly shed the confines of the closet. His doctor had found a "strange skin cancer" and ordered tests to confirm what it was.

"I thought it was just a cyst but it turned out to be something more serious. Four days before our wedding I was all happy, getting ready to go do our ceremony and then get that bombshell," Oddie, 54, recalled in an interview with the Bay Area Reporter this week. "It made me take a look at my life."

While his doctor was able to successfully treat his skin condition — "They think they got it all," Oddie said this week — he continued to wrestle with how to disclose his sexual orientation and live life as his authentic self.

"I was thinking about it. I am running for re-election and I want people to see me for who I am," said Oddie.

He was directly confronted with the issue when filling out the East Bay Stonewall Democratic Club's candidate questionnaire in order to be endorsed by the main LGBT political group in Alameda County. While he highlighted a number of pro-LGBT actions he has taken as a council member and working on behalf of Bonta, Oddie omitted his being gay in his response to Stonewall.

He did reach out privately to several members of the club, including Stonewall's political action committee chair John Bauters, a gay man who serves on the Emeryville City Council, and revealed his sexual orientation to them. The club voted earlier this month to endorse Oddie, but did not denote his being a member of the LGBT community in announcing the results of its endorsement meeting.

As he prepared to finalize a campaign flyer to mail off to Alameda voters this week, Oddie again grappled with whether he should officially come out to his constituents by using a photo of himself and his husband. He made the decision to do so earlier this week after consulting with several East Bay LGBT politicos and his older daughter, Sarah Oddie, 29, who is again serving as his campaign manager.

"I told my daughter Sarah the other day I was doing this and saw her feelings of joy that I was at the point where I was able to share this with the whole world," said Oddie, who first came out to his children in 2010. "I can hear the pride in her voice, you know. It meant a lot to me."

Sarah Oddie, who lives with her father and is a field representative for Alameda County Supervisor Wilma Chan, told the B.A.R. that, while elated about her father's decision, it took her by surprise.

"I was not sure he was ever going to get to that place where he could feel comfortable doing so," she said. "My reaction was a little bit of, 'Oh, wow! You are there, that is exciting,' and also relief a little bit that he feels comfortable enough to be out and proud and just have it out there instead of worrying about what people might think."

For most people on the island city next to Oakland the news will come as a surprise. Bonta, who first met Oddie in 1999 and hired him as his campaign manager when he first ran for Assembly in 2012, told the B.A.R. that he "had no clue" until Oddie came out to him earlier this year and invited him to his wedding.

"I was so happy and felt a lot of love," said Bonta. "It felt like, I guess, a privilege or sort of honor — I don't know what the right word is — that he felt comfortable with our community we sort of built in the East Bay and around him for him that he would feel that comfort, that support, that love from us."

Bonta added, that, "obviously, we all want to be our complete and full selves. For him, for some time, he felt like he wasn't able to do that."

Oakland-based government affairs consultant Michael Colbruno, a gay man who formerly chaired Stonewall's PAC, has known Oddie for eight years. But it wasn't until Oddie reached out to him this week for advice on how to handle his coming out that Colbruno learned he was gay.

"I always think it is great when an elected official decides to come out of the closet and live their life openly and honestly because that is the way we want elected officials to make decisions," said Colbruno, adding that the positive effect it has had for Oddie is evident. "There is a noticeable difference in Jim. You can see the relief in him in talking about what he has been carrying around all these years."

It is believed that Oddie is the first out LGBT person known to have served on Alameda's city council. With a sizeable LGBT population, and situated in the heart of the liberal Bay Area region, neither Oddie nor his associates believe his sexual orientation will negatively impact his campaign for a second four-year term on the council.

"In the Bay Area we have moved past that. If anything, it will be beneficial to him," predicted Colbruno. "We respect public officials who are open and honest."

He may lose some support, acknowledged Oddie, but remains confident that most voters will see he has been an effective leader on the council.

"I think if people wouldn't vote for me for a bigoted reason, I wouldn't want their vote anyway," said Oddie. "I think I have done a good job and what the people of Alameda expected of me."

Just days before his wedding an independent investigation found that Oddie had violated his city's charter by recommending a candidate for the city's fire chief to City Manager Jill Keimach, as the East Bay Express reported. She illegally recorded conversations she had with Oddie and another council member and quit her position under a $945,000 separation agreement shortly after the report was released.

Asked about the controversy this week, Oddie told the B.A.R. that no one has brought it up as he campaigns for re-election. He added that he has "a lot of faith in Alameda voters" and that they will re-elect him based on his "track record on the council."

'Open and accepting'
Raised in the Chicago suburbs, Oddie graduated from Indiana University with a degree in finance and received his MBA from Loyola University in Chicago. He attempted to come out to his family in 1994, "but it didn't go over well," recalled Oddie.

He chose to continue suppressing his sexual orientation and relocated with his then-wife to California in 1995. The family moved two years later to Alameda, and Oddie earned a law degree from the University of San Francisco.

After coming out to his daughters — his youngest, Linnea Oddie, 27, now lives in Portland — Oddie credited them with being "braver than I was, I think," noting that they took part in demonstrations in 2008 against Proposition 8, the ballot measure that banned same-sex marriage in California and was later overturned by the courts.

His marriage this year forced him to confront his fears about coming out to a wider circle of friends and associates. To his relief, the responses were of ones of acceptance and joy for him and his partner.

"Everyone seemed very open and accepting," said Oddie. "It was a lot different than the first time when I tried to share this information with people."

He never expected to remarry, but now that he has, Oddie said being "with someone you love and loves you back, and we can take care of each other out in the open with friends and extended family, it is fun."

Nonetheless, Oddie admitted "it is all a little bit scary right now" in talking to the media for the first time about being gay and wondering how voters will react when they find his campaign material in their mailboxes. Personally, he feels "a lot more relaxed," and finds himself wondering what he was so afraid of before.

"The way people have accepted it as not a big deal, I should have known that in the beginning," said Oddie.