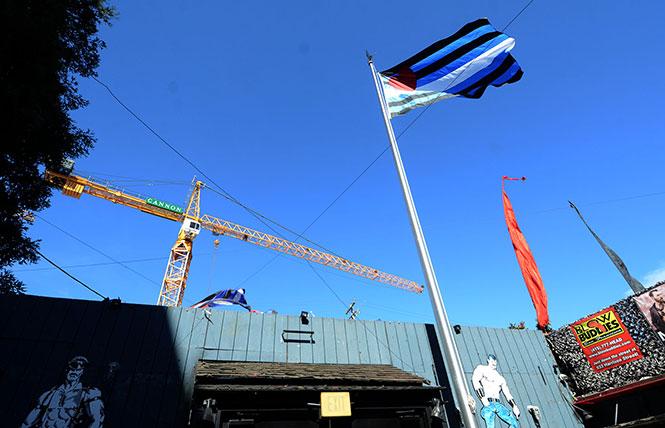 The leather pride flag flies at the Eagle bar as construction continues on a mixed-use development that will pay for a leather-themed public plaza nearby. Photo; Rick Gerharter

Permit issues have delayed construction of a leather-themed public plaza that will transform the roadway outside the Eagle bar in San Francisco's South of Market neighborhood into a gathering place for residents and tourists.

For nearly two years proponents of the project have been seeking sign off from various city departments on the design of the plaza, which the planning commission approved in February 2016. Access issues for fire trucks and other safety vehicles proved to be a major sticking point and led to tweaks in the layout of the parklet, which will be built on 12th Street between Harrison and Bernice streets.

But nearly four months after plaza supporters met with San Francisco Public Works officials to press for action, the agency has yet to seek approval for the plaza's major encroachment permit from the Board of Supervisors. Nor is it clear when the supervisors will vote on the item.

"This project has been delayed almost to the point of nail in the coffin status by various city agencies," said Brooke Ray Rivera, executive director of Place Lab, which is overseeing its design and construction.

She has been using a "Cinderella" dress metaphor to describe the process.

"The stepsisters keep ripping shreds off it," she said.

Public Works spokeswoman Rachel Gordon told the Bay Area Reporter this week that the agency did not know when the permit request would be submitted to the supervisors as interdepartmental design criteria was still being finalized for the plaza. The project "has been a complex undertaking," explained Gordon, resulting in the lengthy design review process.

"Given that the proposal would necessitate vacating a portion of a public street, we needed to ensure that utility infrastructure, traffic flow, emergency response access, and street cleaning operations under the new street design were appropriately addressed, while also keeping in mind the desire to provide enhanced open space for community use. That planning and review work has taken time," wrote Gordon in an emailed reply.

Outgoing District 6 Supervisor Jane Kim, who represents SOMA and is termed off the board this year, has yet to agree to sponsor the permit request at the board. Contacted Monday for comment, neither Kim nor her legislative aides responded by the B.A.R.'s press deadline.

Rachele Sullivan, a leatherwoman who is a member of the Friends of the Eagle Plaza group, told the B.A.R. this week she expects the supervisors will sign off on the permit.

"I think at this point, with the supervisors knowing that we are preserving the historical site and actually creating an area that will be open for all community members South of Market, not just the leather and LGBTQ community but the neighborhood and its families, I am hoping that Supervisor [Rafael] Mandelman and the other supervisors are able to help us in the completion of it," said Sullivan, referring to the board's only LGBT member, who was elected in June to represent District 8, which includes the gay Castro district.

Fundraising drive
Over the summer the plaza supporters launched a fundraising campaign to raise $150,000 to cover the parklet's decorative elements. They hope to break ground in early 2019 and dedicate the plaza ahead of next year's Folsom Street Fair at the end of September.

In February 2015 the B.A.R broke the news about the Eagle Plaza plan, which will feature design elements celebrating SOMA's ties to both the LGBT and leather communities. In the 1950s LGBT individuals began moving into the neighborhood, and by the 1960s, it had become a world famous destination for those in the leather community.

The plethora of gay bars and nightclubs, many catering to the leather scene, along or near Folsom Street earned it the nickname of the "Miracle Mile." Today, only a few LGBT nightlife establishments remain in the area, most centered on or near Folsom and Harrison streets between Eighth and 12th streets.

The city has designated that section of western SOMA as part of an LGBTQ cultural heritage district. Backers of the Eagle Plaza see it serving as a focal point and main gathering spot for the LGBTQ district.

The plans call for an on-site cafe at the corner of 12th Street and Harrison. It is meant to help activate the Eagle Plaza so that it doesn't become an encampment for the homeless.

The plaza will feature open, hardscape areas able to host neighborhood gatherings, events, and outdoor performances. It will also have quiet, green spaces where people can relax, picnic and walk their dogs. The Eagle bar's flagpole sporting the leather pride flag will be relocated into the plaza.

The parklet's estimated cost is $1.85 million. In addition to Build's contribution, the city awarded $200,000 in grant money to the plaza. The Friends of Eagle Plaza will be seeking donations to cover the remaining costs at its booth at this Sunday's Folsom Street Fair near Ninth and Folsom streets.

"I believe in the community and the international community that this place will be completed with their help and their monetary support, so when they come and visit they will know they had a huge part in creating this space meant for all of us in a very historical area South of Market," said Sullivan, who worked on the creation of the leather cultural district.