Leathermen by day, farmers by weekend 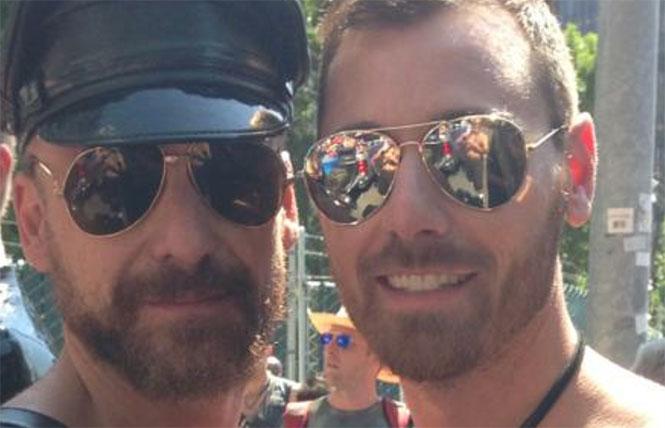 Yes, they wear leather chaps and one has won major leather competitions, but they also can their own fruit and make jam on their 10-acre farm.

The two men are the epitome of yin and yang. Cross works out daily and spends his 9-to-5 in the marketing department at Old Navy, while Paul works early into the a.m. dealing with rowdy people at Powerhouse.

But on the weekends, that all changes.

Almost every Friday the couple drive two and a half hours with their four French bulldogs to their idyllic farm near Placerville, California. Listening to Paul and Cross describe their country home that they bought in 2015 sounds like a romantic comedy.

Their time at the farm is spent tending the land, building fences, canning fruit that they later give away to friends, collecting eggs from the chickens, and relaxing after a hard day's work on the wrap-around porch.

Unlike their busy lives in San Francisco (they live above Powerhouse) the farm allows them peace of mind.

"Andy and I both feel like this is a place where we can escape and not have to think about the nonsense," Paul said. "I feel like the farm makes me a better man in the city because I am able to relax and decompress, and get my hands in the dirt."

Cross said time moves slower on the farm and that it has changed the way he looks at life.

"I appreciate things a lot more," he said. "Before I had a place to get away my life was really regimented. I went to work, then the gym, got home, watched TV until I fell asleep, and repeated the same process.

"But at the farm, there's always a challenge, always something new to do. At the end of the day I'm tired, but it feels so rewarding," he added.

Oh, and the dogs? They love it too.

This picturesque life may not have been possible if the two men hadn't met because of their mutual interest in leather kink. Cross grew up in Santa Maria, California. When he was a kid he would sneak out in the wee hours of the morning onto the family's shared computer in the living room to look at pictures of leather community icons like Lenny Broberg, Patrick Mulcahey, Joe Gallagher, and Race Bannon, the Bay Area Reporter's leather columnist.

He would read articles about Powerhouse and thought it was made up. But he soon found out it was reality when he moved to San Francisco in 2002.

Paul grew up in a small town in Arkansas and said his experience growing up gay in Middle America wasn't too bad. He went to school in Atlanta, where he worked at the Atlanta Eagle, a gay leather bar. After college he eventually made his way to San Francisco, and, four days after he arrived, got a job as a bartender at Powerhouse.

"The very first time I went to the Powerhouse, Carlton was working," Cross said. "It wasn't until years later that we became interested in one another."

But from the moment they went on their first date, the two have been inseparable.

"We've been monogamous since our first date," Paul said. "I don't want anyone but him. His representation in the community is as a leader and as a charismatic, understanding, and sensitive man. When I look at him, I think he's beautiful."

Although leather brought them together, their relationship and what it means to them is unique.

Cross, who has judged leather contests around the country and participated in countless events and holds multiple titles, said it started out by just walking into a bar.

"You get into the bar and go to an event, but it becomes so much more," Cross said. "It starts out as a sexual interest and grows from there to become a community. It's like stepping into a wormhole where you discover other sexual fetishes, and the people behind them. The real reason behind it is that they are all searching for a connection."

For Paul, the community has "taught me about self-respect and community," and at the heart of it is "men with like-minded kink who want to celebrate this planet and try to have some fun and also do what's right."

Both men consider themselves elders in the leather community and have watched it evolve.

"People are feeling more free to be themselves," Cross said. "If someone doesn't identify as a hypermasculine person, they feel free to do whatever they want, and that's what leather should be."

A lot of contestants in recent leather competitions are guys in harnesses wearing heels and makeup, Cross noted.

Giving advice to the new generation of leathermen is something Paul feels is a duty. The culture embraced drugs in the 1990s, which Paul said has come with a cost today.

"In our community it's really important for guys to look at the choices they're making," he said. "I want people to do what's right for them."

At the Folsom Street Fair September 30, Paul will be bartending and Cross will be an attendee, but both are excited for the event. And after the week that follows, it's back to the farm.