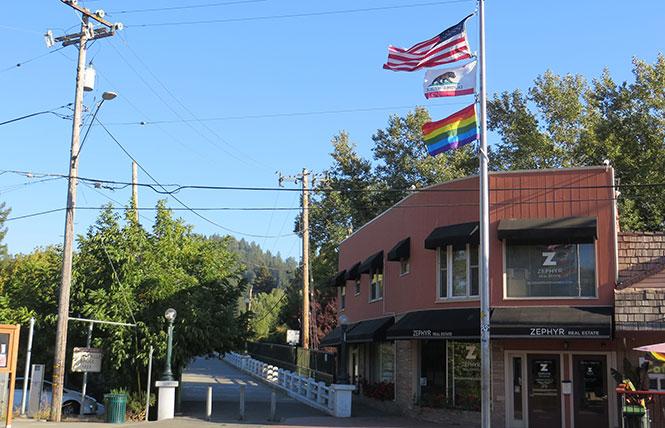 The rainbow flag that flies on the Guerneville Plaza flagpole has been stolen yet again. Since the flag was first put up in June 2017, it has been stolen more than half a dozen times. It has been replaced and is currently flying.

Sergeant Spencer Crum with the Sonoma County Sheriff's Office confirmed with the Bay Area Reporter that Joseph Garlock, 31, was arrested September 15 on suspicion of stealing the rainbow flag two days prior. As of now, it is not believed to be hate or biased related, Crum said.

"If the flag was stolen due to a prejudice of sexual orientation than he would be charged with a hate crime, but that's up to the D.A.," Crum said in an interview. "However, he said he was drunk and stole it and didn't indicate any bias against sexual orientation."

Garlock was arrested on one count of petty theft, which is a misdemeanor, according to the sheriff's office. He was released on $1,000 bail. The case is currently under review by the Sonoma County District Attorney's office and no filing decision has been made, according to Joseph Langenbahn, spokesman for the D.A.'s office.

The flag was reported missing September 14 by a member of the Sisters of Perpetual Indulgence, Crum said. When investigators followed up and talked to owners and employees of businesses near Guerneville Plaza, one employee of a real estate company said they saw Garlock with the rainbow flag. After authorities contacted Garlock, who lives in Guerneville, he admitted to drunkenly stealing the flag, according to Crum.

As previously reported by the B.A.R., Vincent Joseph O'Sullivan, 55, was found guilty in June for stealing the rainbow flag. He was sentenced to 36 months probation and 100 hours of community service.

O'Sullivan also faces a hate crime charge for another incident in May where he threatened to "bomb the gay people in Guerneville" at a local Safeway store, authorities said. He targeted one individual who was the victim in this case, a gay male employee of the Starbucks located inside the Guerneville Safeway store off Highway 116.

Other threats and language allegedly used by O'Sullivan during the incident included, "I am going to kill all the motherfucking gays," and "I am going to blow you up you motherfucking faggot," according to Robert Maddock, the deputy district attorney prosecuting the case.

O'Sullivan pleaded not guilty to the hate crime charge at his arraignment July 12. He is expected back in court November 2 for the start of his trial.

Beth Streets, a straight ally who started the Flag Supporters group that has been replacing the purloined rainbow flags, said although the latest incident may not be hate related, it still feels like it to many community members.

"I think this time it was just a drunken, stupid thing he did even though there is no excuse," said Streets, who also filed a complaint with the sheriff's office related to the most recent incident. "It still makes people feel it is hate even if it's not intended to be."

She added, "The first thing I thought, unfortunately, was do we have someone else that is hating in the community?"

Streets has followed O'Sullivan's cases closely and has been subpoenaed to testify at his upcoming trial.

"It's really disheartening to see the hate crime activity around the Pride flag," she said. "I'm glad the D.A. choose to prosecute Vincent O'Sullivan. It's more critical now than ever to make sure the flag is flying and to not let crimes interrupt the community's unity and pride."

She said post President Donald Trump's election, she has seen an uptick in discriminatory behavior in the area, including graffiti that contained hate speech. She has also heard reports from community members who said they have heard hate speech just walking the streets of Guerneville.

Although the Board of Supervisors has not taken any action regarding this, Hopkins said, "We stand in solidarity as a board in support of all members of our community in support of tolerance and inclusion."