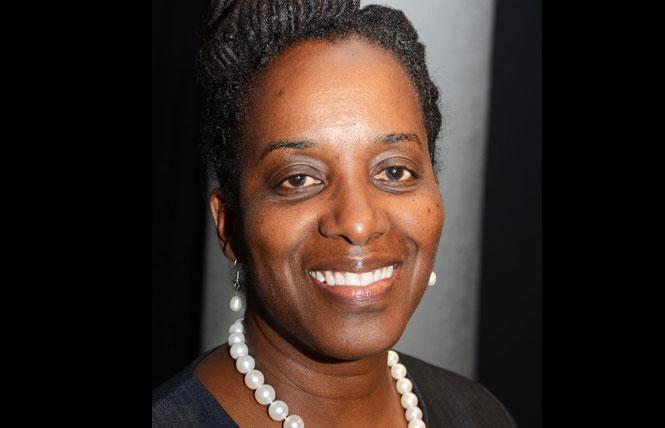 Jovanka Beckles has defied the odds during her public service career. As a lesbian on the Richmond City Council — the city's first out LGBT member — she withstood blatant homophobia from residents — and some council colleagues — who said they didn't approve of her "lifestyle," persevering through contentious council meetings where people made vicious anti-gay remarks. Four years ago, when she ran for re-election, Chevron spent $3 million against Beckles and her running mates because of their corporate-free politics campaign. Beckles and the others swept their races. This year, Beckles shocked most political observers when she came in second in the top-two primary for the open Assembly District 15 seat. The first place winner, former Obama staffer Buffy Wicks, a relative newcomer to the district, may have more money and endorsements, but Beckles can't be counted out. We endorse her for the general election on November 6.

If elected, she would become the first out LGBT state legislator from the East Bay, which is home to a sizeable queer population. She would also become the first out African-American woman — born in Panama, Beckles is both black and Latina — and LGBT immigrant elected to the Statehouse.

Beckles is eschewing corporate funds, opting instead for a "people, not profit" campaign accepting small donations. When she met with us for an editorial board meeting earlier this year, Beckles told us that she has local support. "We have proven people-power works," she said. Her amazing second-place finish in the primary bolsters that claim.

Her platform includes a housing for all plank that calls for expanding rent control at the local and state levels and ending what she called the "harmful" Costa-Hawkins rent control limits (repealing the Costa-Hawkins Rental Housing Act is Proposition 10 on the November statewide ballot). She favors housing developments through a mixed-income, high-quality, not-for-profit model. As a city councilwoman Beckles helped pass the first new rent control law in California in 30 years in Richmond, supported a major redevelopment plan, and developed a nationally-leading program to protect homeowners from foreclosure, her campaign website states. She told us she opposes the Ellis Act, a state law that allows property owners to evict tenants if they want to "get out of the rental business." She acknowledged it would be tough to do — other state lawmakers have tried and failed. But, she said, having more elected state lawmakers who are listening to the voices of the people might help make the heavy lift of Ellis Act repeal a possibility. The housing crisis is a statewide problem; it's time for legislators from other areas to come on board.

On health care, Beckles wants to implement a single-payer, Medicare for All program to cover all California residents. Such an effort has support in the Legislature, though a bill was killed last year. It will take more progressives elected in the Statehouse to give momentum to the plan. Beckles would be in a good position to jump-start the discussions.

Beckles also supports reforming Proposition 13 to close corporate property tax loopholes. This is another idea that has gained traction in recent years, and one that gay former Assemblyman Tom Ammiano championed. He has endorsed Beckles, as has One Revolution, the political action organization spun out of Bernie Sanders' 2016 presidential campaign.

On civil rights, Beckles would, naturally, be a strong voice for LGBTQ inclusion. She wants to strengthen immigrant sanctuary laws to prevent state contracts with private contractors who collaborate with Immigration and Customs Enforcement. She also wants to abolish case bail; Governor Jerry Brown recently signed a bill to do just that, so, if elected, Beckles will be able to help see it implemented.

We admire Beckles because she stands up for her principles and her community. The 15th Assembly District is one of the most progressive in the state, and it was clear in her primary win that Beckles has broad support. In fact, most of her primary challengers have endorsed her, including the other out candidates, Berkeley school board member Judy Appel and East Bay Municipal Utility District board member Andy Katz. Dan Kalb, the Oakland City Councilman who narrowly lost to Beckles for the second spot in the top-two primary, has also endorsed her.

Beckles is an outspoken leader, and in today's charged political climate, that's an asset. While California is a deep blue state, Democrats in the Legislature run the gamut from moderate to progressive. We need a strong, progressive voice for the under-represented, including LGBTs, and particularly, trans women of color in the East Bay. Beckles will use the Assembly seat to fight for everyone in her district.