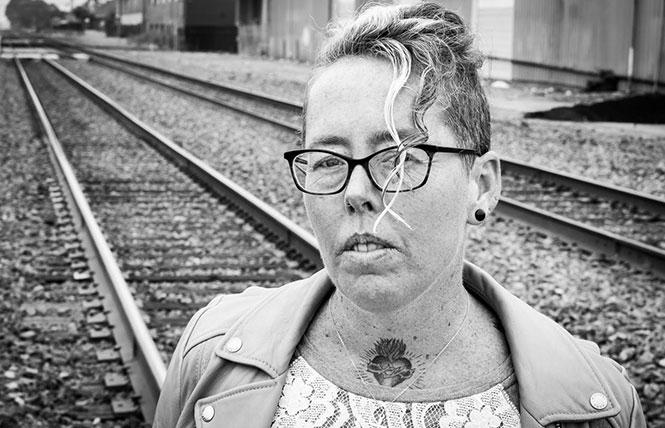 El Cerrito's newest Poet Laureate Dani Gabriel is already starting off big with an event she conceived called Out Loud, sponsored by the Arts and Culture Commission of El Cerrito.

Gabriel will emcee and perform poetry at Out Loud, Wednesday, October 3, as part of the East Bay city's weekly Off the Grid street food market.

She consciously employs the term "performed" because, "I always mean for the readings to be very alive." Two more Out Loud events are planned for November 7 and December 5.

Gabriel's presentation will include poetry, spoken word, an open mic, and writing exercises. All ages are welcome and no writing experience is necessary. Food will be available for purchase from multiple food trucks.

The Off the Grid concept was started in San Francisco in 2010 and features a collection of food trucks grouped together to "allow neighbors to connect with friends." More than 50 weekly public events are now held throughout the Bay Area.

Appointed poet laureate by the commission August 21, Gabriel, 40, identifies as queer and gender-nonconforming, and uses "she/her" pronouns. She lives in El Cerrito with her partner and two children, but grew up in both San Diego's San Carlos neighborhood and San Francisco.

"I started writing poetry at age 16 in San Diego," Gabriel said, when she joined a writing group at the local LGBTQ community center. From the start, she was an activist around queer issues in what she called "very conservative San Carlos." Within a year, she was hired by a Planned Parenthood chapter to work with its community outreach effort.

At age 18 she left home to move to more progressive Berkeley and jumped into organizing for queer and women's rights, immigration, and against racism. She perused UC Berkeley's catalog as she considered her next steps in life.

She ended up earning a bachelor's degree in the peace and conflict studies program at Berkeley, from which she graduated in 1998. Gabriel fondly recalled studying under Professor June Jordan at Berkeley: "the greatest poet who ever lived."

After Berkeley, Gabriel's formal education continued at Mills College, where she received a master's in fine arts in English and creative writing in 2000.

Gabriel is the second poet laureate of El Cerrito, whose current mayor, Gabriel Quinto, is gay and one of the few HIV-positive officeholders in the country. The first El Cerrito poet laureate was Maw Shein Win, who just had her first full-length collection of poems, "Invisible Gifts: Poems," published by San Francisco-based Manic D Press (www.manicdpress.com).

"I'm thrilled that Dani Gabriel is El Cerrito's new poet laureate," Win said. "I'm excited about her upcoming programs, which include a monthly series called Out Loud at Off the Grid."

El Cerrito's poet laureate position was created in October 2015 and is funded by the city's Art in Public Places program. The ACC oversees that program and created the laureate to "... raise the status of poetry in the everyday consciousness of El Cerrito residents and inspire writing and performances of poetry."

ACC Vice Chair Judith Tannenbaum expanded on that by revealing one of the reasons they selected Gabriel was, "her commitment to inclusion, to expanding the understanding of what poetry can be in a community."

Possibility Project
Earlier this year, Gabriel founded what she has named the Possibility Project, organized under the fiscal sponsorship of Oakland-based Nomadic Press. Its mission is to "produce writing and to lead art, performance, and learning opportunities that fight the idea that voices from the margins don't matter."

"Everyone deserves an opportunity to find their voice and be heard," said Gabriel, who is the project director. The program is aimed at teens and younger kids.

Starting October 12, Gabriel will teach a free class at Chapter 510, Oakland's youth writing center at 2301 Telegraph Avenue. The class, "Creative Writing for Gender Expansive and LGBTQ Tweens ages 9 to 13" is described as "a safe place to be your amazing, fabulous, creative self."

In her published writing, she mostly concentrates on poetry and essays and has appeared in Sojourners magazine.

For Gabriel, "Justice encapsulates a lot and especially resonates in the Trump era. All we do for healing and empowerment contributes to justice." Her website, http://www.allthepossible.com, encourages people to contact her.

"I am always looking for other writers about social justice," she noted.

Under the name Dani Montgomery, Gabriel has published two books: "The Woman You Write Poems About (Civil Defense Pocketbook)" and "MOLOTOV MOUTHS: Explosive writing" (published by published by Manic D Press), a work by seven authors in the Molotov Mouths Outspoken Word Troupe; the troupe has a mission of social justice.

In fall 2019, her children's book "Sam not Samuel" will be published by Penny Candy Books. According to Gabriel, the book is about "a transgender boy, his annoying sister, and their family's journey through his transition" and was inspired by her own son's story and her children's "fierce love for one another."

Gabriel continues to be involved with the Young Women's Freedom Center in San Francisco, founded in 1993 for system-involved and formerly incarcerated cis, trans, and gender-nonconforming young people (www.youngwomenfree.org). For two years, she coordinated the center's Writing to Power program.

She is also a postulant for the Diaconate in the Episcopal Diocese of California, aspiring to ordination and service in the church and community.

The new laureate is eager to promote three poets she particularly likes: Martin Espada, Pablo Neruda, and Uchechi Kalu. Over the years, she has read and reread poetry and prose author Maggie Nelson, whose work is informed by feminist and queer theory and is often autobiographical.

Tannenbaum expressed her enthusiasm about Gabriel's additions to the commission's offerings and said, "Dani's vision for poetry is one that meets people where they are as they go about their lives in our town. At Off the Grid, for example, she'll offer poetry and art-making activities right there on the spot."

Both the October 3 Out Loud and Off the Grid start at 5 p.m. at 6159 Fairmount Avenue in El Cerrito.

Updated 9/28/18: This article was updated to include the publisher of "MOLOTOV MOUTHS: Explosive writing."