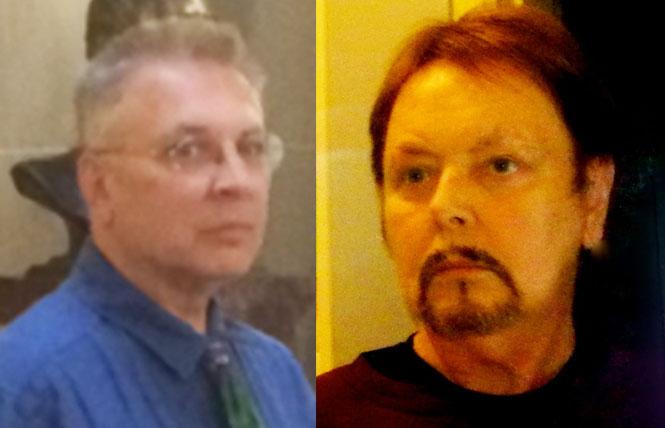 Prosecutors in the Michael Phillips murder trial continued calling witnesses Monday, September 24, and demonstrated Phillips' desperation for money and his attempt to steal money from the man he is charged with killing, James Sheahan.

Phillips, who remains in custody on $3 million bail, pleaded not guilty in April to murder, robbery, and other charges related to the death of Sheahan, a 75-year-old gay man. Phillips, 65, also a gay man, was arrested in November 2017 in connection with the death of Sheahan, whose body was found August 14, 2017 in his Nob Hill apartment.

Phillips is also charged with elder abuse and fraud, two counts of first-degree residential burglary, possession of fraudulent financial documents, theft of an access (ATM) card, and felony of possession of stolen property, according to the San Francisco District Attorney's office.

On Monday at San Francisco's Hall of Justice, three of the prosecution's witnesses were called. Sergeant Domenico Discenza with the San Francisco Police Department was among them.

Discenza said he collected over 100 documents from Phillips' residence at 455 10th Avenue and, through search warrants, obtained social media messages between Phillips and his husband, Archie Arcaya Fuscablo. Phillips and Fuscablo met online and married at City Hall October 30, 2017, just weeks after Fuscablo arrived in the U.S. from the Philippines.

Discenza told the court that Phillips had set up a GoFundMe account in 2017 to ask people to help him bring a friend to the United States and asked for money in a Facebook post in the first half of September that said it was a life or death situation.

A Facebook message was obtained by Discenza that was sent from Phillips to Fuscablo on August 12 at 9:18 p.m. Discenza confirmed that the last time Phillips left Sheahan's apartment was August 12 at approximately 8:36 p.m.

The Facebook message sent from Phillips to his husband said, "I fought hard all day to get money gram money to send you." August 12 is the day Deputy District Attorney O'Bryan Kenney previously argued that Philips killed Sheahan.

During opening statements of the trial last month, Kenney explained that the motivation behind Phillips' decision to kill Sheahan was Phillips' need for money to help Fuscablo, pay off loans, get a visa, and cover other costs. Kenney also told the jury that Phillips was in major debt to the IRS, Visa, and friends.

Sherry Sheahan also took the stand. She is the wife of Sheahan's brother, Thomas Sheahan. The couple live in Minneapolis. Kenney asked Sherry Sheahan about the will they found in James Sheahan's Bush Street apartment.

"Did James Sheahan leave anything to a person named Michael Phillips?" Kenney asked.

"He did not leave anything to a Michael Phillips," Sherry Sheahan replied.

She also confirmed that James Sheahan did not give Phillips permission to take money or possessions from him or cash checks in his name. During opening statements Kenney told the jury that Phillips stole paintings, journals, and other belongings of James Sheahan's.

Sherry Sheahan testified that Phillips did not attend the funeral service she and her husband arranged for James Sheahan. She said Jacqueline Buckley, a close friend of James Sheahan's for almost 25 years, was at the funeral.

Deputy Public Defender Kwixuan Maloof reiterated what Sherry Sheahan told investigators at the time of James Sheahan's death, which was that Phillips was "a very nice person," and a good friend of James Sheahan's.

Next on the stand was Sharlene Chahal, a Wells Fargo regional services consultant. James Sheahan banked with Wells Fargo.

There were about six checks that prosecutors tried to prove Phillips had written to himself off James Sheahan's account from July to August. Chahal confirmed that a couple of the checks had been returned due to insufficient funds in the account. The check amounts ranged from about $300 to $4,000.

Maloof, however, asked if there was ever a fraud report circulated regarding James Sheahan's account from July to September to alert him of any suspicious account activity, and Chahal answered, "I am not aware of any fraud report posted to the account."

As previously reported by the Bay Area Reporter, during opening statements, Kenney painted Phillips as a brutal killer who manipulated and took advantage of a sick, elderly man. Maloof told the jury there was no DNA or scientific evidence linking Phillips to the murder, only circumstantial evidence.