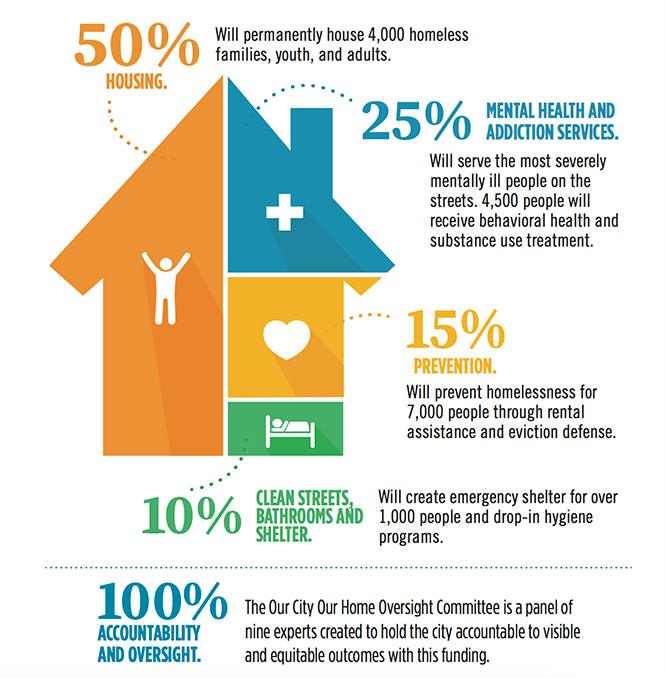 This chart shows how money raised through Proposition C would be spent. Photo: Courtesy Yes on Prop C campaign

At this point, everyone who lives, works, or visits San Francisco has become an expert on homelessness.

Not that everyone knows the details of every service or research on the interventions that work best. But we see homelessness visibly in our city every day. And most of us see what isn't working.

In 2012, I became the director of HOPE (Housing Opportunity, Partnership and Engagement), in charge of carrying out the mayor's vision to end homelessness. Everything I thought I knew about homelessness was wrong.

I had thought we had a robust system, that the services just needed to be coordinated and that homeless people just needed to avail themselves of help. I was wrong.

I found a system starving from malnourishment, that had nowhere near the capacity to meet growing need, and operated from the very problematic place of scarcity. Since the system did not have enough bread for the people, the system was designed so that only very few would qualify to get bread.

Like me, you might see someone severely mentally ill on the street or riding a BART train and you wonder, how is this person not being helped? Right now, 40 percent of the 4,666 people brought in, but then released from a psychiatric emergency facility, go back to the street without any plan of care, temporary housing, or service.

Or, you might see a SF Homeless Outreach Team (SFHOT) worker engaging with someone on the street — and then see the outreach worker walk away — naturally assuming the homeless individual refused services.

Currently there are over 1,100 people on our shelter waiting list and our 65-person SFHOT outreach team only has 50 dedicated beds out of 1,300 shelter beds. There are far too few placements at shelters or the five Navigation Centers available to outreach workers.

LGBTQ homeless
One of the things I was shocked by was the number of homeless people who identify as LGBTQ. We didn't have any data on this, so I added the question to the Point-in-Time Homeless Count and Survey. Thirty percent of the 5,518 single adults older than 25 experiencing homelessness identified as LGBTQ in the 2017 Homeless Point-in-Time Count. Nearly half (49 percent) of 1,363 unaccompanied youth respondents under the age of 25 identified as LGBTQ, much higher than the adult population.

In June 2015, San Francisco opened Jazzie's Place, the nation's first LGBTQ shelter for homeless adults that is operated by Dolores Street Community Services. Jazzie's is a 24-bed shelter targeted to serve lesbian, gay, bisexual, and transgender homeless adults. It has nowhere near enough beds to meet the need.

While most homeless San Franciscans become homeless as housed San Franciscans, we also have many sisters and brothers who come to San Francisco seeking sanctuary from abuse and homophobia. They end up homeless, struggling to survive without the dignity of a home.

Proposition C
San Francisco has many excellent services, but we don't have the capacity to respond to the crisis on our streets. I have seen firsthand, when we do invest, such as when former President Barack Obama invested in housing subsidies for veterans, we were able to functionally eliminate homelessness among vets.

This is why people who work in homeless services joined hundreds of small business owners, and community members, to gather signatures and place Proposition C on this November's ballot. If passed, Prop C will levy a half percent in gross receipts tax on corporate revenues over $50 million. It is estimated that the measure will generate $300 million a year.

We have projects that are shovel ready in the Mayor's Office on Housing and Community Development that simply need the funding. We also have 1,000 vacant single-room-occupancy hotel rooms whose owners are willing to turn them over to the city if they have a housing subsidy.

This is a bold proposal that is our chance to tackle the homeless crisis. It is comprehensive in its approach. After years of tinkering with half measures, it is finally our chance to see a visible difference on the streets. It will keep San Franciscans in their homes — whether they face a catastrophic health issue or if their rent is surpassing their fixed income. It will eliminate the shelter waitlist. It will eliminate the need to push people from one side of the street to the other. Most important of all, it will create the housing we need to move our homeless community inside.

As a gay man, I am tired of hateful Trump-like responses to this homeless crisis. I feel we have a choice. We can continue with the status quo and respond to this humanitarian crisis with ineffective incremental approaches that go nowhere, or we can get serious and invest in solutions that work.

Bevan Dufty, a gay San Francisco resident, is a former District 8 supervisor, a former homeless czar under the late mayor Ed Lee, and a current BART board director.