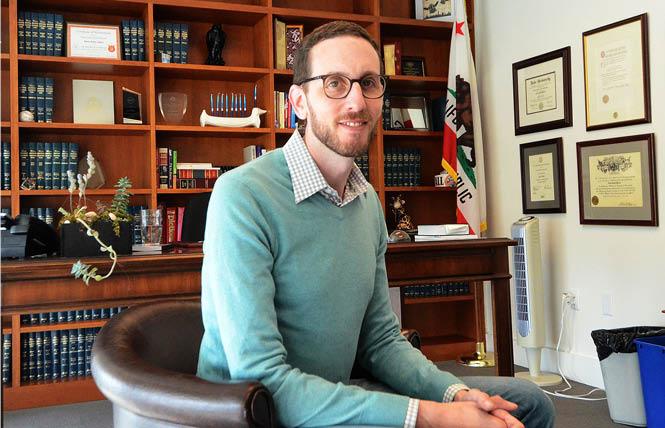 A bill aimed at protecting transgender inmates in California was quietly killed in the Legislature this session but should be revived next year.

Known as the Dignity and Opportunity Act, it would have required that incarcerated transgender people in California jails be referred to by their preferred pronouns, gender, and name.

Gay state Senator Scott Wiener (D-San Francisco) introduced the legislation, Senate Bill 990, in March. It would have allowed inmates to specify their gender identity, first name, and gender pronouns during the intake process at all jails and prisons in the Golden State. All employees and staff of the correctional facilities would have been required to use the information.

The bill also aimed to ensure equal access to programming and work opportunities for transgender individuals in custody who are housed outside the general population for their own protection, which happens frequently.

As Wiener noted in a piece earlier this year that he posted to the website Medium, "Transgender women, in particular, are frequently housed as men and, as a result, victimized by other prisoners. 'For their own protection,' they're then placed in isolation and lose access to critical services."

The Senate passed SB 990 May 30, and the bill advanced out of several Assembly committees. But the Assembly Appropriations Committee on August 16 held the bill due to its estimated costs, said Wiener, after the California Department of Corrections and Rehabilitation came out with a high price tag for its implementation.

According to a fiscal analysis of the bill dated August 8, Wiener's legislation would result in "significant ongoing" costs in the tens of millions of dollars for the state agency as it would need to hire additional staff "to operate career technical training, educational, and cognitive behavioral therapy programs within administrative segregation units inside CDCR facilities."

Jessica Peters, a principal consultant on public safety for the Assembly Appropriations Committee who wrote the fiscal analysis, estimated that, "based on current standards for teacher-to-inmate ratios and necessary security," the legislation could result in costs of about $1.5 million "for staff to operate required programs at each of the 43 locations CDCR estimates are subject to the requirements of this bill, resulting in a total statewide cost of roughly $65 million annually."

Peters also estimated there would be a "significant onetime" cost ranging from "tens of millions to potentially hundreds of millions of dollars" because the state agency would need to "build space for the required programs to operate within administrative segregation units."

Other costs associated with the bill, wrote Peters, could total tens of millions of dollars due to the need to "hire additional staff to provide security to inmates housed in administrative segregation units while the inmates are engaged in job assignments."

She also predicted there would be "unknown potentially significant" costs in the millions of dollars should the state agency need to litigate issues stemming from passage of the bill. And it would need roughly $150,000, wrote Peters, to train staff and update "regulations related to the preferred name, gender pronoun, and honorific requirements."

With the issue of how prison guards and other jail personnel address transgender inmates an ongoing issue, Wiener said he plans to continue to press for a legislative solution. Until the B.A.R. recently inquired about the status of the legislation, Wiener had not publicly spoken about it being shelved this year.

Whether due to fierce opposition or financial costs, it is not unusual to see LGBT bills killed in the California Legislature in one session but revived the next. It took two years, for instance, for Assemblyman Phil Ting (D-San Francisco) to adopt legislation requiring local law enforcement agencies to update and strengthen their policies on hate crimes, including those committed against LGBT individuals.

In 2017, he pulled the bill due to concerns about the costs police departments would incur in implementing it. Ting reintroduced it this year as Assembly Bill 1985, and it passed out of the Legislature in the spring.

Governor Jerry Brown signed it into law June 13. According to the analysis of the bill by staff for both the state Senate and Assembly, its fiscal impacts should be minimal.

In another example, gay Assemblyman Evan Low (D-Campbell) garnered national headlines last month when he announced he was shelving his Assembly Bill 2943, which would have designated "conversion therapy" for adults as consumer fraud in the Golden State. Doing so would have resulted in licensed professionals found to be offering what mainstream medical groups decry as junk science being stripped of their license to practice in California.

Apart from the usual anti-gay lobbying groups that opposed the bill, religious leaders throughout the state had feared Low's bill would adversely harm priests and pastors if they were to counsel parishioners struggling with their sexual orientation. After meeting with a number of church leaders over the summer, Low announced August 31, the last day for bills to be passed by legislators, that he wanted to redraft his legislation.

Low, who chairs the Legislative LGBT Caucus, promised to work with religious leaders and LGBT advocates on the legislation and resubmit it in the future.