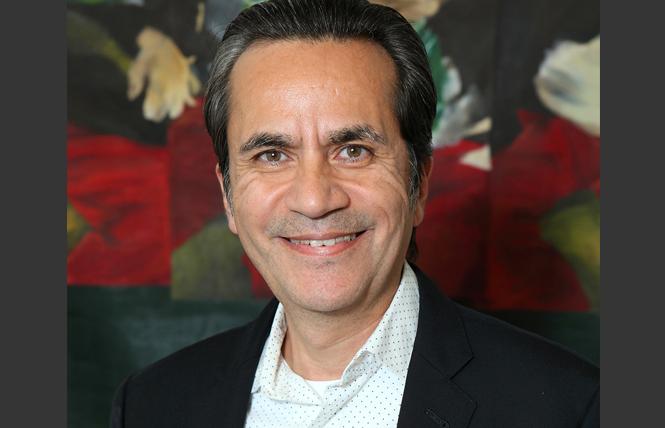 A gay Latino man has been appointed to lead the Health Equity Institute for Research, Practice, and Policy at San Francisco State University.

Jesus Ramirez-Valles, Ph.D., began his new job last month. He is recognized for his expertise on health equity and global health issues.

"Nobody should be denied the chance to live a long healthy life just because of social, economic, or environmental conditions," said Ramirez-Valles.

That belief has motivated his career and is why the researcher, filmmaker, author, and LGBTQ and HIV activist was tapped to lead HEI, as it's known.

HEI was established in 2006 to reaffirm the university's commitment to social justice and "to ensure all people have full and equal access to opportunities that enable them to lead healthy lives."

A video on the HEI website (http://www.healthequity.sfsu.edu) illustrates how social differences such as "race, class, gender, sexual orientation, or immigration status" may cause a person to be treated unfairly.

While SFSU is primarily focused on education, it also has researchers whose work serves the overall campus; HEI is one example. Ramirez-Valles will lead a multi-disciplinary team focused on original research, community practice, training, education, and communications.

The goal is to improve health equity in the larger SFSU community. Ramirez-Valles is a tenured full professor and will earn $175,000 per year.

Ramirez-Valles, 52, was raised by a single mother in a family with six children in Juarez, Mexico, just across the border from El Paso, Texas.

"I was always a different kid," he recalled. He knew very early that he wanted to get out of Juarez. His father was a U.S. citizen living in El Paso, so that was always an option.

After high school, Ramirez-Valles earned a B.A. in mass media communication theory at the Instituto Tecnologico y de Estudios Superiores in Monterrey, Mexico. Even though he was exploring his sexuality in Monterrey, he admitted, "I covered my gay identity."

He returned to Juarez to work as director of an organization called Women's Health, funded by private foundations. On a volunteer basis, he also worked for a community-based HIV education program.

"We wanted to bring more resources to the border, but you can imagine the stigma at that time," he said.

As he worked in Juarez over the next three years, Ramirez-Valles fully embraced his gay identity.

"We were in the press and I was fairly open at that time," he said. "My family knew of my sexuality, but did not feel comfortable discussing it."

Ramirez-Valles moved to Michigan in 1989 to pursue a master's degree in public health at the University of Michigan.

"I planned to return to Latin America after my degree but 'life happened' and I decided to stay in the U.S.," he explained. "Working in HIV and health in Mexico is very difficult for a gay man."

He continued studying at Michigan and, in 1997, earned a doctorate in the Department of Health Behavior and Health Education, with a minor in sociology.

After a short stint as a visiting professor at UCSF's Center for AIDS Prevention Studies, Ramirez-Valles moved to Chicago and took a position in the community prevention research division of the Department of Psychology at the University of Illinois-Chicago.

Until the HEI appointment, he remained at UIC, ultimately becoming director of the Division of Community Health Sciences in its School of Public Health.

He also met his husband, Brad Trask, in Chicago, and when the two men became partners, co-adopted Trask's 5-year-old son. Ramirez-Valles and Trask, 54, married in 2014. Their son Cameron, 18, is now starting college on the East Coast.

In 2007, he was the executive producer of a 72-minute documentary titled "Tal Como Somos/Just as We Are." The film examines the lives of seven Latino LGBT men and women, looking at their relationships with family and loved ones, while exploring their sexuality in the contexts of culture, religion, and work. Soundtrack and subtitles are in Spanish and English; the trailer is on YouTube.

In 2011, he published his first book, "Campaneros: Latino Activists in the Face of AIDS," based on the life history of gay male activists. The book centered on HIV and AIDS prevention and utilized research funded by the National Institutes of Health.

Ramirez-Valles interviewed 80 queer men for the book, half in the Bay Area and half in Chicago.

"I felt their voices needed to be heard," he said. "Some were recent immigrants and activists in the country of their birth.

"In the U.S., many men in Latino communities are living 'in the margins' without access to good education," he pointed out. "Strong family values can be positive, but are not good if you don't fit into the accepted roles."

"I wanted to bring queer perspectives into public health, and to help graduate students understand gender and health from the queer perspective," he said. He encouraged his students to create services that did not simply "replicate hetero programs."

In 2016, Ramirez-Valles published a second book, "Queer Aging: The Gayby Boomers and the new Frontier in Gerontology." Gay baby boomers "created much of what we think of as gay identity," he believes.

The book focuses on gay men, comparing those who have HIV with those who do not, across different ethnic groups. "I have been following the HIV epidemic pretty much my whole life," he said.

"When HIV turned into a chronic condition about 10 to 12 years ago," he explained, "I started investigating how gay men would age with HIV. I found out that we knew very little about older gay men and how gay baby boomers would age."

Ramirez-Valles has seen many positive changes for, and in, the LGBTQ community while he has lived in the U.S., but was very disturbed by Donald Trump's election. "[His election] is a reminder our fight has to continue," he said. "We cannot rest because we have gay marriage."

Ramirez-Valles also will continue to work on two research projects based in Chicago. One is on structural violence in health equity, funded by the NIH, where he is one of three principal investigators, or project leaders. The other is a research project on the mental health of bisexual men, also NIH funded.

His husband, Trask, is very excited about the move and said, "San Francisco is a great place for us as a family, and for us to pursue the next chapter of our engagement with local communities."

HEI is part of SFSU's College of Health and Social Sciences, whose dean, Alvin Alvarez, Ph.D., welcomed Ramirez-Valles aboard.

"One of the things you'll see in his scholarship is that it directly applies to marginalized communities, communities of color and the LGBTQ community," he said. "Making that bridge from scholarship to the lives of actual people is a rare gift."