TLC joins in moment of silence for 2018 trans murders 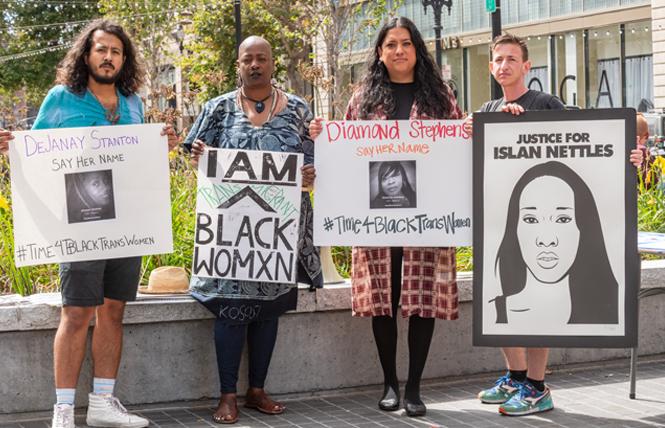 The Transgender Law Center joined with other groups around the country to bring attention to the number of trans women of color murdered so far this year.

The Oakland-based group held a moment of silence Friday, September 14, for the 14 black transgender women who have been killed in the United States in 2018, according to TLC. Activists, local artists, and community members gathered in downtown Oakland in front of the Peet's Coffee near Broadway and 16th streets for the event that was organized as a national moment of silence.

Posters with pictures of the faces of deceased black trans women and the hashtag #SayTheirName lined a cement bench in front of Peet's where the small crowd stood. Isa Noyola, a trans Latina woman and deputy director of the TLC, opened the vigil.

"The purpose of coming together is more than just to hold a moment of silence and to say her name," Noyola said. "This moment goes along with a string of many moments, including the day we stood on the front steps of [San Francisco] City Hall for Taja DeJesus and Penny Proud. We made a commitment that day that every single day we will continue to fight for our community and our sisters and GNC community members who are under attack."

DeJesus was a Latina trans woman who was stabbed to death in San Francisco in 2015. Penny Proud was a black trans woman from New Orleans who died of multiple gunshot wounds that same year.

Noyola encouraged attendees to not only reflect on the trans lives lost, but to focus, in the future, on supporting black trans women individually and in leadership roles. Helping combat the "fear" being instilled in various minority communities by President Donald Trump's administration was also part of Noyola's message.

Before Noyola and other event organizers led the small group in chants and song, the names of the 14 deceased trans women were read aloud. After every name was called, the crowd yelled, "We Say Their Name."

The names included black trans women: Diamond Stephens, 39, who was shot to death June 18 in Meridian, Mississippi; Tonya Harvey, 35, who died after being shot in Buffalo, New York; Shantee Tucker, 30, who was found on a highway in Philadelphia after being shot in the back, according to local news reports; and London Moore, 20, who was reportedly murdered early last week in North Port, Florida. Moore's death initially sparked the national moment of silence, which was also supported by GLAAD and the National Coalition of Anti-Violence Programs.

Oakland vigil participants then held the signs with the black trans victims' faces and the moment of silence followed. Some signs also included woodblock prints from Oakland artist Ashara Ekundayo that read, "I am a black woman." Ekundayo owns a gallery in Oakland that exclusively shows art from women of the African diaspora.

Ekundayo, a queer woman, told the B.A.R. that "black women's voices are under attack," and that she was there to "amplify the voices of black trans women and make sure their stories are celebrated."

Two young attendees were on their lunch break from a nearby building where they are interning at Forward Together, whose mission is to unite communities to win rights, recognition, and resources for all families.

Jessica Shen-Wachter, 17, a queer woman, and Shreya Tamang, 17, a bisexual woman, were overwhelmed with sadness.

"As non-black people and being cisgender, we have a tremendous duty to trans folks in general," Shen-Wachter said. "Black trans women are killed at such disproportionate rates. It's terrifying."

The women, who are seniors at Albany High School, said they felt a strong sense of community at the event and felt empowered to take action.

"There is a lot more we need to do to try and combat and stop it," Tamang said. "They need help from our more privileged allies."

Shen-Wachter said more effort needs to be paid to stop the anti-blackness and homophobia in today's society, particularly by highlighting the voices of black trans women.

"A lot of times in our allyship we often tend to put the spotlight on ourselves instead of the people whose issues we are speaking on. Centering the voices of black trans people and women is so important," she said.

Elliot Fukui, 32, who identifies as transmasculine, was also at the moment of silence. Fukui, director of community engagement for TLC, called the violence against black trans women in the country an "epidemic" and said the time to act is now.

"It's time to start making demands from our communities to start actively finding solutions to the violence communities are facing," he said.

Getting to the root of why there are higher rates of unemployment, homelessness, and poverty in the trans community is among the first steps to helping solve the problem, Fukui said, along with providing resources, safe spaces, and support for black trans women.

TLC currently offers a program that provides a safe space and sense of community to black trans women called "Black Trans Circles," led by black trans activist Raquel Willis. The program launched this year in the South and Midwest United States with the purpose of building the leadership of black trans women to create community solutions for prevention, healing, and resilience in response to violence.

Fukui also mentioned the Black LGBTQIA+ Migrant Project, which addresses the ways in which LGBTs are targeted by the criminal justice and immigration enforcement systems, and marginalized in the broader migrant community, and racial and economic justice movements.

According to GLAAD, an LGBT media organization, 20 trans individuals of all races have been killed so far this year. For Noyola, the moment of silence was a moment for the community to find hope.

"We are gathered here not as organizations, not as nonprofits. We gather as communities as we always have in the Bay Area ... every time these situations happen we gather as community because only through community do we find power, information, healing, and hope to carry on," Noyola said.