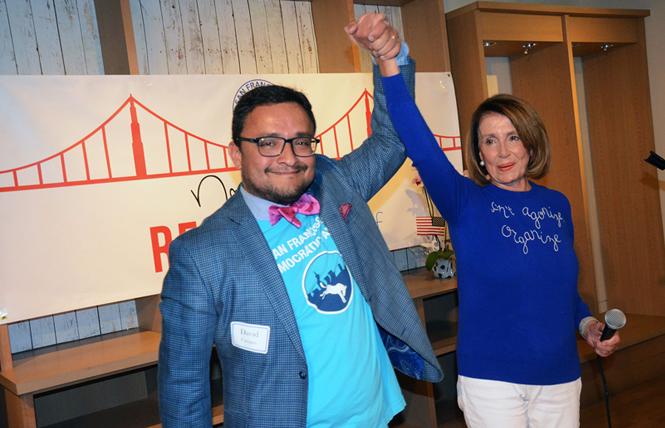 David Campos has often spoken about coming to the United States from Guatemala as an undocumented immigrant at the age of 14. He went on to become a citizen, graduate from Stanford then Harvard Law School, and serve on the San Francisco Board of Supervisors.

But Campos, a gay man who now chairs the San Francisco Democratic Party, rarely speaks about the first time his family tried to cross the border in 1981 when he was 11. He, along with his parents and two sisters, were detained by the border patrol in Chula Vista, near San Diego, and returned to Central America.

"I was a kid in a detention center. It was a very traumatic experience," recalled Campos.

He noted it occurred during the administration of Republican President Ronald Reagan. Nonetheless, the federal officials his family encountered treated them with decency, he said.

"Forty years later that is no longer the case," said Campos. "It tells you something of where we are as a country."

He was speaking at the opening last Saturday, September 15, of a volunteer center in the heart of San Francisco's gay Castro district where people can assist with the Democratic Party's efforts to take back control of the Congress in the midterm elections. Officially known as the "Red 2 Blue SF" headquarters, it is located at 2390 Market Street, once a Pottery Barn store where gay former state senator Mark Leno had his mayoral campaign headquarters earlier this year.

This is the first time that the local Democratic Party has opened such an office during a midterm election year. House Minority Leader Nancy Pelosi (D-San Francisco) is helping to fund it.

She was on hand for its opening and to thank the VIPs, i.e. volunteers in politics, for donating their time toward helping Democrats to flip House seats held by Republicans across the country. The volunteers will be texting and calling voters in targeted congressional districts.

Pointing to the mural across the street of the late gay supervisor Harvey Milk, who represented the Castro at City Hall in 1978, Pelosi said the LGBT icon was "looking over our shoulders. He was about grassroots politics and listening to constituents."

The volunteers at the headquarters are following Milk's example, she said, by talking directly to voters about issues of national concern. From access to affordable health care and ensuring an accurate count in the 2020 census, there are myriad issues to discuss, noted Pelosi.

"We must win this election," she said.

Democrats need to pick up 23 seats to reclaim the House of Representatives and one seat to take back control of the U.S. Senate. With President Donald Trump's approval rating at a historic low, political pundits are predicting a blue wave come the November 6 election, with Democrats likely to regain the House.

"We have tremendous candidates. They know why they are running," said Pelosi. "They know how to connect to the voters, and you are a means to that end as well."

Volunteers at the office in the Castro are calling residents of both districts to encourage them to support and vote for the two Democratic challengers. Carpools are also being organized every weekend to bring volunteers out to the districts to knock on the doors of Democrats and independent voters in the Modesto and Fresno metro areas.

In addition to helping out with the phone banking efforts, the Alice B. Toklas LGBT Democratic Club is also asking its members to spend the weekend prior to the election in Denham's district to assist with get out the vote efforts.

"People are really excited and very optimistic," said Gina Simi, a lesbian who co-chairs the moderate political group. "We live here in San Francisco in a safe haven but we are not taking that lightly. We want to go out to these red districts to help flip them."

Simi and Eric Lukoff, a gay man who is Alice's other co-chair, went out to the district in July to speak with voters. For many of the people they met, it was the first time anyone with the Democratic Party had bothered to engage with them, said Lukoff.
"It was really inspiring," he said.

This Saturday afternoon gay El Cerrito City Councilman Gabriel Quinto, currently serving as his city's mayor, is co-hosting a fundraiser for Janz. Tickets start at $50 for young professionals and $175 for others.

"Here's our chance for our community to make a difference and help turn a red area blue," Quinto told the B.A.R. "I am hoping that this house party in El Cerrito will get folks engaged and fired up to finally turn Fresno blue. We need all LGBTs to do their part on the grassroots level! This race can be won!"

Jason Clark, a gay man who chairs the Republican Party in San Francisco, told the Bay Area Reporter that the effort to flip the Central Valley seats would not be successful.

"The Central Valley is Trump country according to the 2016 map," he noted. "I think if they are pinning their hopes on flipping a lot of California seats, then they won't reach their goal as many of these seats will likely remain Republican."

Kevin Bard, a gay man who is one of the organizers of the Castro office, told the B.A.R. that the margin of victory in the races could come down to several hundred votes. The call center in the Castro will be key, he said, in ensuring the final count swings Democrats' way.

"The energy is very high. People are pissed off and scared in a way I personally have not seen," said Bard, who serves on the board of the Harvey Milk LGBTQ Democratic Club.

A number of local LGBT Democrats are planning to head to other states this fall to work on congressional campaigns. Reese Aaron Isbell, a gay man who was a former Alice co-chair, will be heading back home to Independence, Missouri October 5 to help Democratic congressional candidates in his home state and next door in Kansas.

He will be staying with his parents through November while he assists the campaigns for Senator Claire McCaskill of Missouri and attorney Sharice Davids, running to be Kansas' first openly gay, Native American member of the U.S. House.

He left his position overseeing government affairs for the California Life Sciences Association in order to return to the Midwest. He took a similar sabbatical in 2004 to volunteer with former Senator John Kerry's presidential campaign that year.

"We have to save the country," Isbell said when asked why he was uprooting himself from the Bay Area this fall. "As cliché as it sounds, saving the world, the reality is this is how we fight back against the fascism of the Trump era and tell Washington, D.C. we won't put up with that."

McCaskill is one of the more endangered Democratic incumbent Senate members this year, while Davids is running in a swing district that voted for Hillary Clinton in 2016 by a slight margin.

"Definitely, we can pick that seat up," said Isbell, adding, "I feel hopeful about both of those campaigns."

Brian Salkin, a gay man who worked on Clinton's campaign and went to Las Vegas ahead of the election two years ago, is planning to assist with this year's effort to flip the House. He is taking two days off from work the week of the election in order to focus on get out the vote efforts either in California or Nevada.

"I will go where we can hopefully win," said Salkin.

The office in the Castro will be open from noon to 8 p.m. Sundays through Fridays and from 10 a.m. to 8 p.m. Saturdays. Volunteers will work a two-hour shift and need to bring a fully charged cell phone and a laptop or tablet.

Web Extra: For more queer political news, be sure to check http://www.ebar.com Monday mornings for Political Notes, the notebook's online companion. This week's column reported on the East Bay Stonewall Democratic Club's endorsements in a number of Alameda County races.