Guest Opinion: A 'thing' (or an 'it'?) called both-siderism

by by Katrina C. Rose 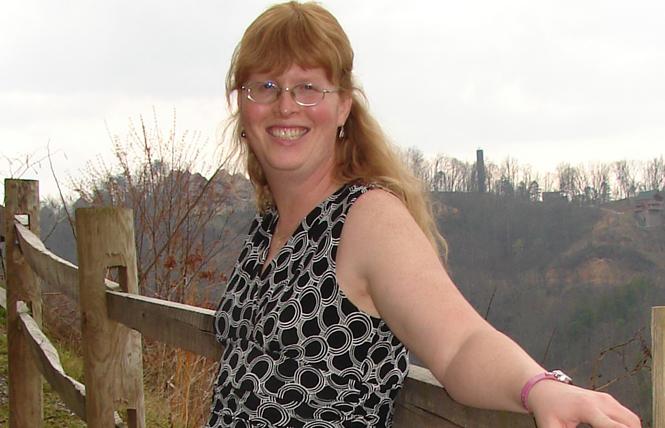 I guess the fact that I remember Jon Stewart's opening line at the 2006 Academy Awards ceremony makes me part of the horde of the "perpetually aggrieved," those who "will ignite whenever they hear or see something that chafes" and who "ignore context."

Stewart's line angered me at the time — and still does to a degree; the guy really should have known better.

And yet, in light of how the movie that yielded Felicity Huffman her Oscar nomination that year — "TransAmerica" — was marketed, I feel compelled to give Stewart a pass.

With posters depicting Huffman's character — her back to the viewer — standing as a liminal demarcation between a male-designated restroom and a female-designated one, why wouldn't even an intelligent liberal such as Stewart, one who may or may not have actually seen the movie, think that its message was that trans women are forever and involuntarily outside of the sex binary? And given the degree to which the trans community embraced the movie, why wouldn't he at least consider the possibility that the community accepted its marketing?

The remark Marshall McPeek, a gay meteorologist at a Sinclair-owned TV station in Ohio, made at this year's NLGJA conference is the here and now.

McPeek's failing (or will his defenders sarcastically call it "transgression?" "crime?" "sin?") was not some possible misinterpretation of some movie's marketing. Nor was it uttering some bit of terminology that may have fallen out of favor while he wasn't paying attention.

You know at least some of the words.

Those will piss people off now, and I will now use neither, but it wasn't all that long ago that I did — the latter far more than the former, and not just in my old Texas Triangle column but also in a few law review articles.

However, as much as I don't like the word "tranny" now, there are plenty of trans people out there — probably a minority, but a significant one nevertheless — who do not have a problem with it.

That, after all, is what McPeek thought it was acceptable to say to a gathering at the NLGJA conference: "Ladies and gentlemen, things and its."

I hate to be the one to break it to McPeek but the only "Thing" I know of (well, apart from disembodied hands, numbered Seussians, and shape-shifting Antarctic monsters) was portrayed in the movies by Michael Chiklis and the only "It" I know of was portrayed on TV by Felix Silla. Neither, when last I checked, is trans. And though I was not at the NLGJA conference, I'd wager a good bit of money that neither was in attendance.

My good friend Monica Roberts, however, was.

"Oh, no, he did not," the proprietrix of TransGriot yelled. "There are no 'things' or 'its' here."

Hank Plante says, "His apology is enough for those of us who know him."

So the rest of us are expected to accept it at face value and, in musical terms, let it go?

I'm guessing that, as a meteorologist, McPeek does not have the sole power to make final employment decisions at his station. But one would have to be obtuse to not presume that he has some influence with whoever makes such decisions, both in, and apart from, the station's meteorology wing. If a fully-qualified trans person applied for a job at his station would he view such an applicant as a "thing"?

This inquiring mind wants to know — and has no intention of letting this go.

And if I ever had any inclination toward such an intention, the Bay Area Reporter giving space to Steve Friess to declare "everybody is wrong. Everybody. And yes, even you, pitchfork-wielding trans Twitter. That's what makes it all so sad" extinguished it.

Essentially, Friess justified "things and its" — qualitatively, if not quantitatively — as some sort of fluffy Ohio colloquialism that has no connection to trans-anything. (Perhaps, if either was up to speed on how toxic Ohio law is toward trans existence, they would not have tried to drop that turkey out of their helicopter and onto this discussion. Forty years on, turkeys still don't fly.)

Then Friess laid it on even thicker.

"McPeek, now 49, was openly gay in the early 1990s as a 20-something on-air TV personality. Do you remember how rare and brave that was 25 years ago?"

I wonder if Friess remembers how brave it was to be out in any profession as a trans person 25 years ago.

I wonder if a fully-qualified trans person — one who may have worked at his station pre-transition but whose applications for jobs elsewhere might somehow result in McPeek being asked about the person — would be referred to in response to such a question with McPeek's fluffy Ohio colloquialism.

And I wonder if it may not have already happened.

"And he was not in some big, progressive coastal metropolis; he was in Toledo, Ohio," Friess wrote. "Like me, he used the NLGJA as a vehicle for a form of activism compatible with also being a journalist, striving to improve public understanding by ensuring we are covered accurately and fairly. He founded chapters, organized conventions, and served on the board and as an officer. As early as the late 1990s, he was among those advocating to add the word 'transgender' to our mission statement."

Adding "T" to the mission statement can be a step toward inclusion.

It can also be a substanceless gesture concocted by those who want nothing to do with "T" but who want to bluff us into believing that we've been included when, in fact, we have not been.

I don't know the inner workings of NLGJA, but I do know that the Human Rights Campaign added us to its mission statement in 2001.

And we all know what happened around this time in 2007 — when, even utilizing McPeek's conceptualization of "things and its," the only "things and its" in HRC's headquarters were the furniture and the plants.

No trans person with any sense of self-worth has any intention of letting that go.

Perhaps McPeek could make a case for himself. And if he is even remotely close to the good guy that others are holding him out to be, we would not have been pelted with "everybody is wrong," an assertion that the B.A.R. should not have allowed to darken its pages even under the guise of being open to opposing viewpoints.

Friess defends himself (along with McPeek) by asserting "All I'm saying is that someone should also put on the record the good work and deeds of the person involved because that is a more likely indicator of whether there was malice." No one has to possess a law degree to realize that that is a load of excrement; you don't get to skate on a speeding ticket by saying that every other time you've gotten behind the wheel you obeyed the speed limit. And no one has to possess a Ph.D. in history to see a parallel between "everybody's wrong" and a certain White House occupant's condemnation "in the strongest possible terms" of a certain "display of hatred, bigotry and violence on many sides, on many sides" in a certain college town in Virginia last year.

Even if McPeek is able to rehabilitate his reputation, I don't see any justification for ever letting Friess get out from under his anencephalous apologia. McPeek may have simply screwed up and screwed up badly. (My gut feeling is that, despite the calls for his canonization, he meant exactly what he said; but, I am sincere when I acknowledge that I could be wrong.) But Friess has decided to police the entirety of trans and nonbinary existence by telling us what aspects of our lives and histories we cannot bring to the table when we see what we see with our own eyes and when we hear what we hear with our own ears.

Three sides are wrong in this fiasco: McPeek for calling us "things and its"; Friess for his policing; and the B.A.R. for giving him the space to do it. I've long since come to expect far, far better from the B.A.R.

Katrina C. Rose, Ph.D., is an attorney who recently completed her doctorate in history at the University of Iowa. Her dissertation is entitled "Forgotten Paths: American Transgender Legal History, 1955-2009."