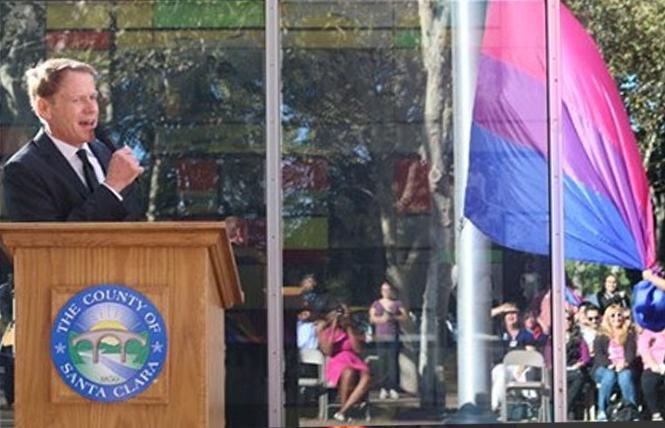 This year marks the 20th anniversary of Bi Visibility Day, and a brunch will take place in San Francisco Sunday, September 23 to celebrate the milestone.

Organizers with Bay Area Bi Network will hold a bi/trans brunch from 1 to 4 p.m. at Streamline, 3560 Taraval Street.

In his newsletter, Yeager said that bisexuality is often marginalized in both the LGBTQ and straight communities, being classified as "confusion" or "a phase."

"This lack of acceptance has a negative impact on bisexual individuals. Both national and local surveys have found that they are at a higher risk for anxiety, depression, and physical and mental abuse than their gay, lesbian, or straight peers. The risk level is particularly high for bisexual women," Yeager stated.

"We saw events in at least 35 countries around the world in 2017," she said in a news release.

Yockney received a Member of the Most Excellent Order of the British Empire award from Queen Elizabeth in 2016. The award signifies outstanding service to the community.

"I've been organizing events marking Bi Visibility Day since 1999, and the transformation in that time is huge," she added. "We are more talked about and more heard as bi people than ever before; yet also the challenges and particular needs of bisexuals have been thrown into sharper relief over that time."

She also explained that research has shown bi people have greater mental and physical health challenges than gay or straight people.

"Where lesbians and gay men have one closet to escape, many bi people find that leaving the one closet leads to being put in another," Yockney added.

"Greater bisexual visibility is the best solution to that problem, helping more bis find a space where they are neither in the 'straight' closet nor the 'gay' one," she said.

People can play video or board games with their friends. The event is held the fourth Tuesday of the month.

The center will also hold a youth town hall meeting Saturday, September 29, from 2 to 4 p.m. at the center. The town hall is being held to "express how we can improve the LGBTQ+ community," according to the center's newsletter.

Dinner will benefit SF Women's Building
Foreign Cinema is holding a benefit for the San Francisco Women's Building Thursday, September 27, from 6 to 11 p.m. at 2534 Mission Street.

Organizers said the event will be a "radiant, multi-level spectacle" and feature celebratory food and signature libations from Foreign Cinema, La Cocina, and Mission Boricua.

There will be interactive entertainment and live performances featuring the Velocity Circus, the Extra Action Marching Band, the Sisters of Perpetual Indulgence, and more from the local arts community.

The Women's Building, at 3543 18th Street, was founded in 1971 and is a city landmark. It was listed for its historical significance predating the modern LGBT rights movement. In May it became the second location in the city to be deemed a national historic site due to its LGBT cultural significance.

Early bird tickets are sold out but tickets are available starting at $105 and can be purchased at https://www.eventbrite.com/e/sherwood-foreign-cinema-benefit-party-tickets-47197572209.

Executive Director Sarah Soul said in an email newsletter that the nonprofit has an extensive wait list and, due to the increased demand, funding has fallen short.

"QLS is taking an active role in responding to increased threats to the mental well-being of the LGBTQ+ community, which significantly increased in the wake of the 2016 election," Soul stated. "Our work in creating a safe space for clients to heal has become more vital than ever. So we are calling on members of our community and our allies to help us fight back against the increased hate and discrimination we have all witnessed."

QLS officials noted that a donation of as little as $20 helps pay for a single therapy session.

Donations are tax-deductible and can be made at http://www.queerlifespace.org/.