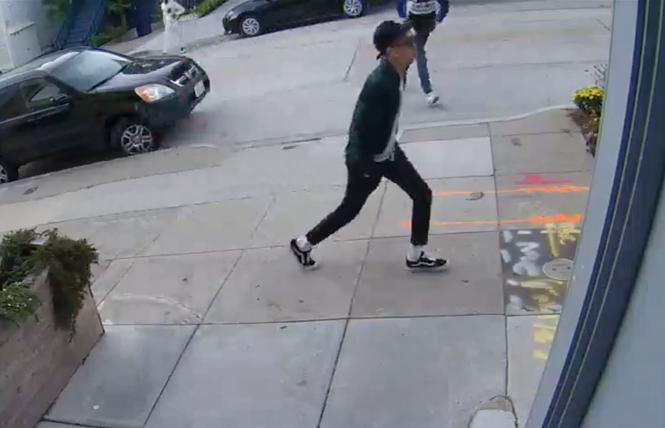 A screen grab from a surveillance camera shows a man walking along 20th Street Sunday evening as other men quickly approach him.

According to San Francisco Police Department spokesman Officer Joseph Tomlinson, the 29-year-old victim was walking near the 3900 block of 20th Street around 6:45 p.m. when three unknown black men exited a vehicle across the street and quickly surrounded him.

The three suspects then punched the victim and proceeded to go through his pockets and steal his property, including a cellphone, police said.

"The three males then fled the scene in a black four-door vehicle," Tomlinson told the Bay Area Reporter. "The suspects are currently at large."

Surveillance video shared with the B.A.R. by Mark Murphy, who currently lives in London but has a home in the Castro, is being used by police in their investigation. It shows the incident that happened across the street from Murphy's house.

The video then shows the suspects fleeing the scene, and the victim with ripped pants.

"Had I still been living in San Francisco, in my home, I most likely would have seen/heard this happen! I cannot tell you how much this hurts ... watching this," Murphy wrote to the B.A.R. in an email.

Tomlinson said the area where the incident occurred is a "relatively low-crime area."

According to a recent police newsletter sent out by Mission Station, which covers the Castro, there were 37 robbery incidents, 64 aggravated assaults, 48 burglaries, and 102 incidents of larceny/theft in the area in August.

"First and foremost, my thoughts go out to the victim — this kind of attack should never happen on our streets. My office is in contact with the SFPD, who have already opened up an investigation into this case. In this particular case, it appears that the most useful tool that the police will have in catching these perpetrators is security camera footage of the crime in progress. I strongly encourage residents to install security cameras, because the more visual evidence we have from neighbors monitoring their neighborhood, the better chance we have to get violent criminals off our streets."

Mandelman continued, "During my first several months in office I have spoken with Captain Caltagirone of Mission Station and asked him to increase foot patrols in the Castro and around Dolores Park, something that he has agreed to do and is already taking place."