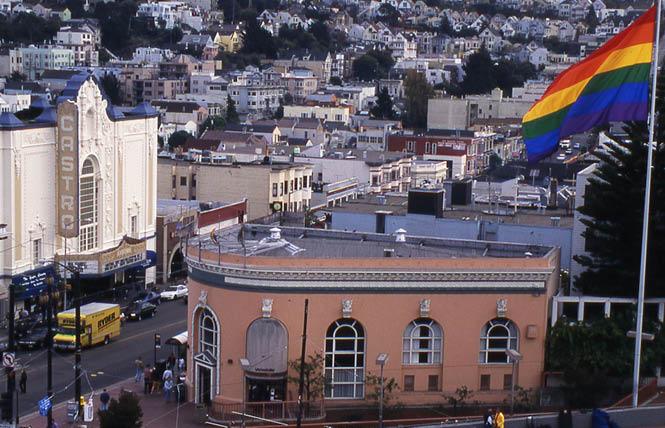 A draft document from the San Francisco Planning Department has recommended that the Mayor's Office of Transgender Initiatives be expanded into more of an LGBTQ affairs office. Photo: Rick Gerharter

Under a proposed plan for how San Francisco can protect and enhance its LGBT cultural heritage, the focus of the Mayor's Office of Transgender Initiatives would be expanded into more of an LGBTQ affairs office.

It would mark the second county in California to have such an entity, as San Francisco is both a city and county. Santa Clara County in 2015 was the first in the Golden State to establish an office for LGBTQ affairs.

Seeing San Francisco follow suit is one of the recommendations contained in a draft version of the planning department's LGBTQ+ Cultural Heritage Strategy. It is to be publicly presented for the first time at the Historic Preservation Commission Wednesday, September 19.

A working group tasked with figuring out how to preserve the city's LGBTQ cultural heritage has been meeting since January 2017 to devise a plan for achieving that goal. As the Bay Area Reporter has previously reported, its formation came in response to community concerns about the shuttering of LGBT bars, businesses, and entertainment venues throughout the city.

It dovetailed with separate initiatives to form LGBT cultural districts in the predominantly gay Castro district; the South of Market area, the historic home to the leather community; and the Tenderloin, long a haven for the transgender community. City preservation officials and LGBT history advocates have also been working to landmark various LGBT historic sites throughout the city and create public spaces that honor the local LGBT community's history.

Two years ago then-mayor Ed Lee created the nation's first mayoral adviser on transgender initiatives. Last fall, Clair Farley became the second transgender woman to serve in the role, which from its start has handled more than just issues of concern to the transgender community.

In May, the B.A.R.'s Political Notebook reported that the winner of the June mayoral election was likely to expand the parameters of Farley's role and designate her their adviser on LGBTQ initiatives. Mayor London Breed had said she would support doing so, and Farley also endorsed such an expansion for her office as long as transgender issues remained a top priority.

The planning department would continue to have an advisory role on those LGBT cultural projects that fall under its purview, as would other city agencies. Farley's office, however, "would become the umbrella organization" coordinating the various initiatives called for in the LGBTQ cultural strategy, explained senior planner Frances McMillen.

Under the proposed plan, the needs of transgender people and the most vulnerable members of the LGBQ+ community "would continue" to be a main focus for Farley's office. But it would also be tasked with "the management of initiatives related to the broader gender and sexual minority community," states the draft plan, which the planning department shared with the B.A.R. ahead of next week's hearing.

"Our office has been working with the LGBTQ Cultural Heritage Strategy to see how we can continue to enrich our communities and preserve San Francisco's vibrant culture," said Farley in a statement to the B.A.R. "As the only trans and LGBTQ city department, we are often working with LGBTQ residents and allied city leaders to address broad community issues, programs, and policies. We look forward to exploring how we can build on this work while retaining our focus on trans and gender non-conforming people and those most vulnerable in our communities."

Staff increase eyed
Funding would be sought in the Fiscal Year 2019-2020 budget for upwards of five additional staffers for the expanded LGBTQ office, said McMillen. The exact funding request to implement the LGBTQ cultural strategy has yet to be finalized.

Terry Beswick, executive director of the GLBT Historical Society who is a member of the working group for the plan, stressed that once the LGBTQ cultural strategy is approved, it will not just be the responsibility of Farley's office to ensure it is implemented. The community will continue to be key in realizing the plan's different components, he said, as will various city departments and agencies.

"Realistically, I want to make sure this isn't an abrogation of responsibility on the part of either the community or city government. It will be up to both the community, local groups, and government agencies," said Beswick, who co-chaired the working group's arts, culture and heritage committee.

At the same time, Beswick believes the creation of an expanded LGBTQ office will be impactful.

"The fact we don't have any office anywhere with the LGBTQ acronym in its title and now we will, I think that will be significant," he said. "I just don't want it to be a czar or a wasteland where the plan gets shelved and collects dust."

The draft plan calls for Farley's office to collaborate with various community groups and city agencies, in particular the planning department and the mayoral offices that handle economic and development issues, on implementing the LGBTQ cultural strategy. It also calls for Farley's office to work more closely with the GLBT Historical Society and the SF LGBT Community Center, from which is rents office space, on implementing parts of the plan.

According to the draft plan the LGBT center would oversee the creation of enhanced navigation tools that LGBT community members could utilize to access a broad array of services, from education and training to workforce development and entrepreneurship resources.

The GLBT Historical Society, which operates a small museum space in the Castro, would continue to work on opening a full-scale LGBTQ museum and public history center somewhere in the city. It would also take a lead role in working with various historic preservation groups and city agencies on protecting LGBTQ historic resources and safeguarding the city's LGBTQ cultural heritage.

The strategy itself is broken into three focus areas: well-being, culture, and opportunity. Under the well-being category falls the navigation tool for LGBT services and better LGBTQ cultural competency training for public and private organizations. It also calls for Farley's office to host a summit to promote and track progress of the LGBTQ cultural strategy.

In terms of opportunity, the draft plan calls for expanding job training and recruitment programs for LGBT people and increased support for LGBTQ-owned businesses. It also calls for the building of affordable housing for LGBTQ people.

The culture category calls on the city to support the creation of the three LGBT cultural districts that have been proposed and the museum plans. It would also see the creation of a LGBTQ+ Historic Preservation Advisory Group that would work with the planning department to landmark LGBT historic sites and other initiatives.

Also included in the draft plan are calls for the development of LGBTQ-focused heritage and arts programming and more affordable housing and?workspace options for LGBTQ artists in the city.

"One of the most consistent responses to this project has been a desire to see the most vulnerable and marginalized members of the LGBTQ+ community uplifted and empowered, and this mission underlies each of the recommendations presented in the report," according to the draft copy of the plan. "The Strategy Working Group is recommending a holistic plan to ensure that the people who actively sustain LGBTQ+ living heritage can remain in San Francisco."

The working group had initially expected to present its list of recommendations to City Hall leaders earlier this year. The new timeline calls for delivering the final report to the Board of Supervisors for adoption sometime in 2019.

"We have every expectation that it will be approved," said McMillen.

In the meantime, the planning department is preparing to hold several outreach events this fall about the project to help shape the final report, recommendations, and funding request.

For updates on when and where those meetings will be held, and to learn more about the city's LGBT cultural strategy working group, visit its website at http://sf-planning.org/LGBTQStrategy.