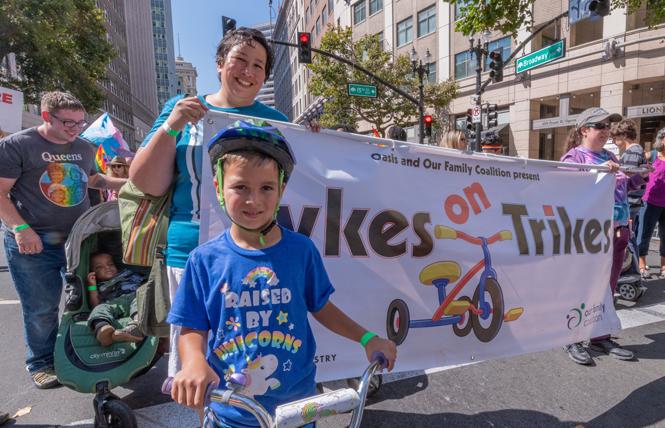 Kids. There were hundreds of them marching in this year's Oakland Pride parade.

They led off the festivities marching with Our Family Coalition, which used the mini train from Children's Fairyland, and they continued walking with their families in contingents representing schools, churches, the library, and more.

Stomper, the Oakland A's elephant mascot, even joined in the fun, donning an A's and rainbow-themed flag during the September 9 parade.

In short, Oakland has maintained its tradition as a very family-friendly Pride event and, as always, celebrated the rich diversity of the East Bay.

This was Oakland's ninth annual Pride celebration and fifth annual parade. Pride officials said this year's event was the biggest yet.

"It was absolutely great, and definitely our biggest year yet," Carlos Uribe, co-chair of the Pride board, wrote in an email Tuesday. "We're looking at, or around, 52,000 in attendance. We've been floating below 50,000 for the last few years and I think that we definitely blew that out of the water."

Oakland Mayor Libby Schaaf again rode in her flame-shooting snail car (right after the Oakland Fire Department's contingent), but this year she wore a custom-designed rainbow flag-themed dress that was a hit at the East Bay Stonewall Democratic Club's annual Pride Breakfast, where she spoke earlier Sunday morning.

"I'm thankful I'm not in jail yet," she quipped, a reference to Attorney General Jeff Sessions and President Donald Trump, who have harshly criticized her for issuing a warning earlier this year ahead of a sweep by Immigration and Customs Enforcement agents.

Schaaf thanked club members "for having my back as mayor." 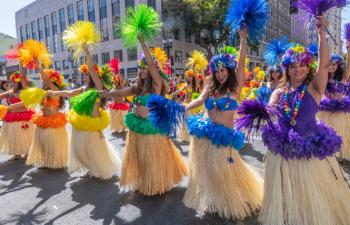 Legacies of the Pacific's Polynesian dancers were a crowd-pleaser at Oakland Pride. Photo: Jane Philomen Cleland

Legacies of the Pacific's Polynesian dancers, whose grass skirts were in rainbow flag colors, proved to be popular with the crowd.

At the festival, booths filled Franklin Street as candidates for office, LGBT organizations, nonprofits, and vendors enjoyed the large crowd. Entertainers focused on music of empowerment and activism.

"It is just this love fest of amazing, vibrant people," said Oakland resident Kristin Stangl, who came with her church, First Presbyterian of Oakland. She warmly welcomed festival attendees to her booth for temporary rainbow tattoos and welcoming and affirming handouts.

"We are just here to share the message that God is love, and Christianity does not have to be homophobic. We want people to feel loved and welcomed," said Stangl. "We want to celebrate the wonderful diversity of creation and for people to realize that they are safe and welcome in their love."

First Presbyterian was not the only religious community in attendance, as the festival and parade saw multiple spiritual and religious organizations, including Plymouth United Church of Christ, dubbed the Jazz and Justice Church. These communities highlighted the diverse perspectives present in the East Bay, showing a sense of an established acceptance for the queer community.

Candy Martinez of the East Bay Meditation Center, which dedicates its work to creating space for traditionally marginalized communities, invited Pride attendees to her booth for wash-off tattoos. An Oakland local for 23 years, Martinez experienced her first Oakland Pride Sunday.

"I feel like many people do not have the opportunities to live their lives out. They come to SF Pride for that experience from all over the world, whereas Oakland Pride is more of a reflection of our local community," said Martinez.

Oakland's acceptance of the LGBTQ community was prevalent, but its community demonstrated other aspects of its distinct culture at its Pride celebration.

Vegan milkshakes, an LGBTQ entrepreneurial networking booth, psychedelic paintings, and queer-inspired clothing booths were just some of the community's reflections one could run into at Oakland Pride.

"Oakland Pride, specifically, is becoming more of a destination. It is another opportunity to come together and have a celebration, not that we need an excuse or permission but festival-wise, I believe Oakland Pride is local and organic," said Martinez.

Oakland Pride's local feel offered attendees a chance to connect to their community. One could show up at the start of the parade, walk to its end six blocks later, and experience the festival's offerings within a few hours.

"As a severe introvert, I love that I can come here, feel fully present, and have this wonderful experience," Stangl said. "I see all these uniquely Oakland people, and I feel connected to my community. There is this chill vibe that there is room for everyone at the table in Oakland. No matter how weird or whacky, we will shrug our shoulders and make room for it." 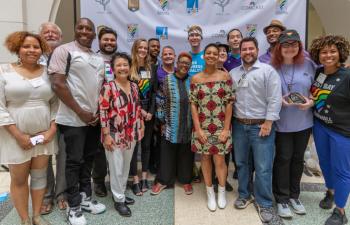 Honorees and board members of the East Bay Stonewall Democratic Club joined together at the Pride breakfast. Photo: Jane Philomen Cleland

Congresswoman Barbara Lee (D-Oakland) exhorted those in attendance to vote in November.

"Your vote, your power, is the only thing," Lee, who was wearing "Stay Woke" earrings, said. "We're at a defining moment in this country."

Lee said she sat through some of last week's confirmation hearings for Supreme Court nominee Judge Brett Kavanaugh, which was a "nightmare."

"This is the first week we're back in session and let me tell you, it's good to be home," Lee said, adding that the Trump administration is "chipping away" at rights "and trying to undermine our freedom."

"They are trying to rebrand hate as religious freedom," she added.

"One thing you've earned, in the words of Aretha, is r-e-s-p-e-c-t," Michael Colbruno, a longtime club official and Oakland Port commissioner, said to Goodall.

Other speakers thanked Goodall for her years of leadership and pointed out she was instrumental in getting the Pride breakfast started six years ago.

Honorees included Alameda County Superior Court Judge Victoria Kolakowski, who served as the club president decades ago and received the Trailblazer Award. She is the first openly trans person to serve as a trial judge in the U.S., and the first out trans person to be elected to a judgeship.

"I didn't set out to be a trailblazer," she said. "When the path ran out, I was too stubborn to stop."

Ola Osaze, a trans masculine queer person who was born in Nigeria, received the Community Champion Award. He said that voices like his, and other queer migrants, have "too long been ignored."

Alyah Baker was the recipient of the club's LGBTQQI Small Business Award. She runs Qulture Collective, a multifaceted community space and creative hub for queer and trans folks.

"It's very hard right now" to own a small business in the city, she said, adding that she just launched www.keepoaklandqueer.com in an effort to solicit donations.

Jeremy Laurin, an employee with PG&E, accepted the LGBTQQI Ally Award on behalf of the utility company. Laurin is president of the company's Pride Network.

"This award means a lot to us," he said, adding that as a cis gay man, he sees himself as an ally to his trans colleagues and the community.

State Senator Nancy Skinner (D-Berkeley) also received an LGBTQQI Ally Award, but she was traveling and unable to attend.

Cynthia Laird, who's the wife of Victoria Kolakowski, contributed reporting. Contact the reporter at c.laird@ebar.com.