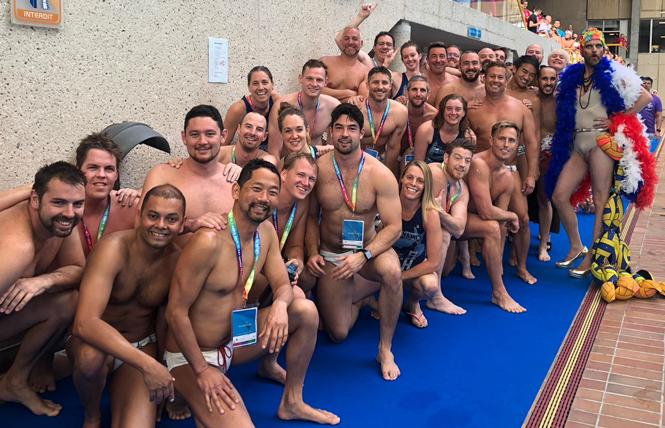 In the end, Paris proved to be exactly what the Gay Games needed.

It had been more than a decade since 10,000-plus LGBT athletes and their supporters had gathered for a global sports and cultural festival, gathered in such numbers to compete, perform, and celebrate in unity. In the interim there had been declining participation and interminable talks between Gay Games supporters and the organizers of the World Outgames, aka the Anti-Gay Games, that thankfully went nowhere, leaving the Gay Games intact and the Outgames out of business.

Through all of that, Paris organizers stuck to their task and their vision. Over the first few days of August, in ghastly hot weather, the Paris games grew better and stronger with every passing day. Final financials are not yet available, but it would appear that Paris did what Chicago accomplished in 2006: bringing five-digit participants together and, unlike New York City, Amsterdam, and Sydney before them, finishing in the black.

That, as I wrote last week, is the Gay Games at the macro level. At the micro level, the level at which athletes and artists from across the globe compete and perform, see old friends and form new bonds, encourage each other and hear each other's stories - at that level, these Gay Games proved to be what the athletes sought, and then some.

You could see it at the track and field competition at Stade Charlety Stadium, a distance runner pausing briefly mid-stride in his competition to cheer a successful high jump completion. As always, the stands were virtually empty except for other track and field athletes, since for the most part, at the Gay Games, the athletes are the spectators. Their cheers mean more than the cheers at most events, since at other events the cheers do not come from people connected with the sport or the team except for their branding preference. At the Gay Games, the cheers come from peers who have lived parallel struggles on and off the playing field, have felt the same joys and pains, and know exactly what it took for their fellow athletes to be there at that shared time and place.

You could see it in the range of nervousness, calm, confidence, and wonderment that engulfed competitors before their events. "I am from Zulu nation," Johannesburg's Bongani Nyathi, a former Oakland resident, told me the day before his javelin competition. "We know how to throw the spear." He took silver.

You could see it on social media, where first-time participants showed their medals and wrote heart-felt essays on what the experience meant to them. You could see it at the bars and the concerts, where athletes recovered and shared the joy of just being who they were. You could see it in the crowds of teammates exploring the city streets and sights, sharing the joy of discovering the architectural genius of generations long past with the formed-families endemic to sports participation.

You could see it with old rivals from Gay Games past joining together for one last hurrah, as happened when veterans of San Francisco Rockdogs and Los Angeles/Long Beach Rebels joined forces for one last shot.

"We were all up in age," Rockdogs co-founder Alex Herrera, 50, told the Bay Area Reporter's Heather Cassell. "We decided that we wanted to give one last hurrah and we all wanted to play together. We all were competing against each other for so long that we want to unite as one team."

"This is probably the first-time, and maybe the last-time, that we will all come together as a team," said Dwight Tunn, 54. "So, it's pretty special for us."

The combined Rebels squad took the silver in the men's master division.

Athletes from the San Francisco Bay Area had solid success in aquatics. SF Tsunami swept the medals in synchronized swimming pairs in the 30-39 age group and took gold and silver in the 50-59 pairs; and Derek Douglas of Stanford Diving Club swept the golds in his 55-59 age group. Cristina Estrada-Pozzi of SF Tsunami swimming won five golds in butterfly sprints and freestyle distance races in her age group; Duke Dahlin and Kristian Nergaard dominated the over-70 crowd in men's freestyle and individual medley; and Bart McDermott, swimming in the 60-64 age group, swept the golds in the 50-meter, 100-meter and 200-meter freestyle.

SF Tsunami water polo fielded two teams, one in the competitive division, which took home the silver; and one in the recreational group, which brought home gold.

Roz McCree, team president and player-coach of the Tsunami water polo team, said she was proud to be part of the organization.

"What we did in Paris - a gold and a silver medal - was truly a team effort and was built on nearly 20 years of team tradition and team building," McCree wrote in a Facebook message to the B.A.R. "Water polo is a tough sport, and not one that's always accessible to LGBTQ people. That is what makes our team special and why all of us - including our terrific straight allies - are so proud to be a part of it."

McCree was on the recreational team and coached the competitive team that won silver.
Scott Shafer, a gay man who was part of Tsunami water polo's recreational team, said it beat London, Sydney (twice), Paris, Melbourne, Montreal, and Manchester en route to the gold medal game, where the team defeated Toronto 5-4.

Shafer, who's senior editor for politics and government at KQED, wrote in a Facebook message that his team had more women than any other.

Most intensely, you could feel the Gay Games magic in the stories told by athletes who had come to the quadrennial event because loved ones from the past who wanted to be there were no longer with them.

René Schildt of Berlin shared one such story with his fellow wrestlers. During practices in Paris, Schildt, a big bear of a man, wore a T-shirt with the name "Josh" on it followed by notes indicating Josh had died during the twin towers attack on 9/11.

Josh, Schildt told us, was a classmate of his and a very dear friend. Schildt, who has a wife and two daughters, is only now coming out and the trip to the Gay Games, he said, was the completion of that. He said he first heard of the Gay Games when Josh told him he wanted to compete in the event.

"I can still remember the sparkle in his eye when he said, 'Gay Games,'" Schildt recalled.

After his friend died, Schildt vowed to compete in the Gay Games in his honor. He found support in his family and in the Berlin gay wrestling club, but was unable to attend the event in Chicago, Cologne, or Cleveland. He figured going to Hong Kong in 2022 would be too expensive for him, so Paris was his best shot.

He wrestled a pair of Aussies from Melbourne and took the silver. But the look in his eye, tears flowing, when he kissed the medal and spoke of his friend - well, that was our gold.

And yes, his eyes sparkled.

Results from 2018 Gay Games events are available at http://www.paris2018.com.