Trump at the fore of LGBT Asian conference 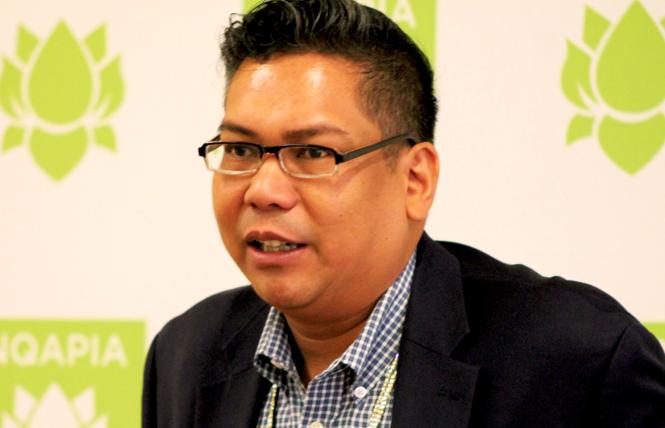 The National Queer Asian Pacific Islander Alliance met in the city late last month and had its largest gathering since the organization was founded in 2007, said spokesman Patrick Lee.

"This political moment is so critical, particularly what is happening in this country," gay Asian activist and NQAPIA Executive Director Glenn D. Magpantay told the Bay Area Reporter. "The need for the LGBT Asian Pacific Islander community to come together, to heal from the trauma, and to strategize about the work that we need to do, is critical."

NQAPIA is a coalition of queer Asian organizations. It hosts the conference every three years.

Resistance
Many activists spoke about the effect President Donald Trump's administration was having on the Asian community and said they are overwhelmed by the multi-pronged attacks chipping away at rights.

"It's important to recognize that not only do we need to stand in solidarity with other communities of color that are coming under attack, but also naming when it is Asian Pacific Islanders who are under attack," said Shabab Ahmed Mirza, a 27-year-old queer transgender activist who was a co-presenter at several workshops.

She pointed out that Asians are the fastest growing immigrant population in the United States and that it's often overlooked that Asians, including South Asians, are being held in immigration detention facilities too.

Mirza said that when Asians are attacked it is "very much in the form of Islamophobia."
"The fact is that people who are Muslim, or racialized as Muslim, are increasingly under attack in the form of hate crimes or hate speech," she said.

The potential citizenship question on the 2020 census was also a concern to many.

U.S. Attorney General Jeff Sessions' visit earlier this year to Sacramento made clear to activists that California is directly in the eye of the Trump administration as it attempts to make an example out of the state. State Attorney General Xavier Becerra continues to defend California from the federal government's onslaught of legal attacks, said Aarti Kohli, executive director of Advancing Justice at the Asian Law Caucus.

Kohli, a straight ally, was a panelist at the "Resistance and Persistence: API Issues in California" discussion, where community leaders described an atmosphere of profound fear among Asians as the Trump administration continues to pass policies harming their communities, strip rights away from people, and embolden white supremacists to attack communities of color who are peacefully demonstrating.

It's been a wakeup call, said Cynthia Choi, a straight ally and co-executive director of Chinese for Affirmative Action, who was moderating the discussion.

She pointed out that the progressive movement is one Supreme Court justice away from losing abortion rights. But a lot of the battle is against familiar entities, she noted.

The difference is that the Trump administration has intensified a sense of unease among communities that already don't trust government institutions. It's created "hyper anxiety," not just among community members, but also community leaders.

Concerns about the potential citizenship question on the 2020 census have led people to decide not to participate in the census, Choi told a room of about 25 participants.

Community leaders don't know how to advise people, she said.

"We don't think we can tell our people to do it," she said, quoting a common sentiment she's heard from community leaders, particularly about the census.

Choi told the group that it's important to have these difficult conversations about how to advise people and be honest about what they know and don't know.

The panelists also talked about how Trump has mobilized people to get active. This includes engaging on political and social campaigns. They told the workshop participants how they were tapping into that energy and using technology to combat misinformation.

They also discussed the importance of victories, such as not allowing local police to aid immigration authorities in California, which is a sanctuary state. (The Trump administration has sued the state over those sanctuary laws, which Governor Jerry Brown signed last year.)

"People need wins," said Kohli. "We can't just constantly hear about what the administration's doing without some ... feeling like, 'Yes, there is a check.'"

Revitalized
Activists who spoke with the B.A.R. said they were appreciative of NQAPIA bringing them together to heal, learn from each other, and return home energized to continue working within their communities.

"This conference is a great place for community, for us to come together, to hold each other, and support each other," said Mirza. "We're living in scary times right now. Places like this allow us to come together to rejuvenate [and] to recommit to the work that we are all doing in our respective communities."

Selena Velasco, 29, is a pansexual nonbinary femme who is of Chamorro descent.

"NQAPIA is a powerful place where Asian South Asian Pacific Islander queer and trans folks of color can come together," they said.

Velasco co-led the workshop about skill building for queer trans APIs and attended other sessions. They found the parenting workshop to be "really powerful."

"It was really powerful to hear what people's hopes and dreams are and parenting for folks who identify as queer and trans API," said Velasco, who lives in Seattle. They also appreciated "being able to share the intersections of being a parent in their activism with other parents in ways that were modeling, transforming, and queering the concept of family."

Some activists said they were preparing to fight for their rights.

"The space is transformative and contributes to the ways in which we are working toward liberation for our communities," added Velasco, who plans to bring back stories and skills learned at the conference to "build power and solidarity across the API community."

"We're getting ready to fight back. We're going to tell our stories. We are going to speak truth to power," she said. "We need to remember that our voice has power, that our stories have power. We can use the power of our stories to make sure that our protections remain in place."

Magpantay couldn't be prouder of the outcome of the conference.

"The conference is exhilarating. The feedback that I've gotten, where we can hold this space where LGBT APIs across the United States can be affirmed, can be supported, can express all of their identities, is such a rare opportunity," he said. "People love this conference, we love each other - it's fantastic."