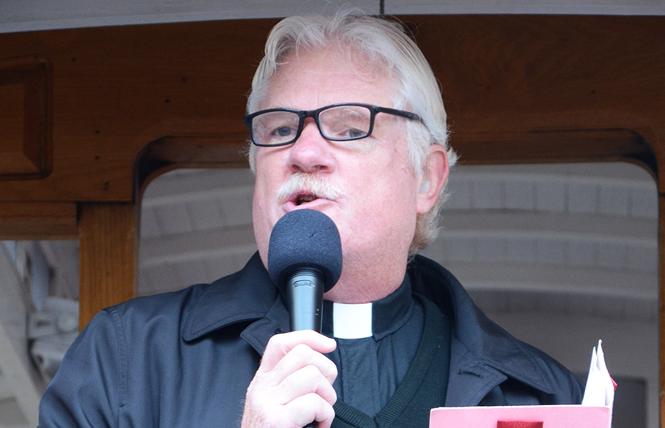 The gay longtime executive director of the San Francisco Night Ministry will retire at the end of the month.

The Reverend Lyle Beckman, who has been a minister for 40 years, has been involved with the night ministry since 2003. The nonprofit ministry provides counseling, pastoral care, and crisis intervention to those who are anxious, afraid, suffering, or wondering.

"On August 31, 2018, I will retire, joining my colleagues Chuck Lewis and Don Fox as one of the night ministers emeriti," Beckman, 66, wrote in a letter to supporters. "I'm looking forward to spending time with family and pursuing other opportunities as they present themselves in the future."

The letter noted that a new leader for night ministry has yet to be chosen.

"The Night Ministry Governing Board is in the process of interviewing and hiring the new team that will lead the night ministry into its next chapter," Beckman wrote. "I have the utmost confidence that they, along with our staff, crisis line counselors, and other volunteers will work together to ensure a successful transition, and that they will be eager to encourage and support the new staff when they are in place by September 1."

"Night ministry helps so many people who are struggling on our streets," Wiener said. "It's an incredible organization. Reverend Beckman is a force of nature and has played a key role in making the night ministry what it is. He will be greatly missed, but he leaves behind a strong organization that will continue to play a key role in our response to homelessness."

"Lyle is an amazing pastor, colleague, and friend," Rohrer said. "In all the years that I have known Lyle, I have never heard him say an unkind word about anyone. He truly embodies kindness and compassion and patience, characteristics our world is in great need of. Lyle listens with an open heart and without agenda, he makes others feel like they are worthy of love and capable of living fuller lives."

Rohrer also feels that Beckman's work will lead to fewer faith leaders who are out of touch or abusive toward the LGBTQ community.

"Lyle's supportive ministry to the LGBT community in San Francisco has been a gift to everyone he has touched," Rohrer said. "His time leading the night ministry is coming to an end, but his mentoring of pastors and seminarians will live on for decades."

Calling at young age
Beckman told the B.A.R. that his pastoral calling began at a very young age.

"I always had a heart for people who were struggling and suffering, so it seemed like an appropriate vocation to follow," he said. "I was 12-13 when I pursued seminary and ordination. I went to a Lutheran high school and college. Every step was a step toward being a minister. I was ordained at age 26."

Before coming to the Bay Area, Beckman worked as a police and fire department chaplain in Union City, New Jersey.

"When they had an emergency I would get the call to provide pastoral care to people who lost their homes or a loved one," he recalled. "I also provided chaplaincy to the police officers and the firefighters, as they needed it as well."

The reverend also did a weekly worship service and Bible study at a psychiatric hospital in Bridgeport, Connecticut. In Hartford, he worked in gang intervention.

"The church was on the borderline between two gangs," he said. "We had a program called Street Alternatives, which offered basketball, boxing, and a lot of coaching and conversation. I hung around all the time to provide a spiritual connection. I told them how important it was to treat their girlfriends with respect and to take care of their children. It was such a poor neighborhood with boarded up buildings, but we helped them see that there were other options if they'd entertain them."

Beckman publicly came out as gay at a time when church policy still prohibited LGBT pastors who were partnered or married from serving - LGBT pastors were required to be celibate. Beckman was one of a group of such pastors who became known as Extraordinary Lutheran Ministries.

"First United Lutheran Church and St. Francis Lutheran Church decided to call pastors who were openly gay, partnered, or married, and who were not approved by the national church," he said. "So this extraordinary way was the way gay pastors were ordained. It was a parallel process. It was a way to stand up and witness to the whole church that there are Lutheran pastors who fall into the LGBT spectrum who serve well and who are called by God to serve."

"I had just left First United and was working part-time in a church in Marin and I was looking for extra income," he said. "With night ministry I felt it was work I was well prepared for. In the past I had worked in inner cities, working with people who were living in poverty or had mental health issues, so I felt I had something to offer night ministry."

"Sometimes they just want conversation because so many people are incredibly isolated and lonely. I'm not sure I had a clear agenda at first. I just wanted to continue the work that night ministry had done, but once I got started I took advantage of a few opportunities that came along," he added.

One of those is an outdoor worship service. On Sundays at 2 p.m. at the Civic Center BART station and Thursdays at 5:30 p.m. at the 16th and Mission BART station, people in need gather for prayer services.

"One-third of our people are homeless," Beckman said. "One-third are living in poverty in hotels and shelters, and one-third are people who like the idea of a community that gathers on a street corner rather than in a traditional church setting."

"Many people who identify in the LGBT spectrum have been hurt or abused by the church," Beckman explained. "So there's a lot of hurt and pain out there. This program attempts to bring healing and reconciliation to those who've been hurt or shamed so they can have a healthy and whole relationship with God and the divine."

Beckman also developed the clinical pastoral education, or CPE, program for the night ministry. Seminary students can complete their work caring for the homeless, hungry, vulnerable, and lonely on the streets of San Francisco, instead of in a hospital, as most do.

"For the LGBTQ community this is important because it means that future pastors are learning to love and care for the full diversity of San Franciscans, including substantial time in the Castro, Tenderloin, on the Ducal Court, in bars and at drag shows," said Rohrer.
Now that his work is done, Beckman is ready to move on.

"I have no sadness about leaving," he said. "It will be a lovely and wonderful transition into what's next. I will still volunteer at night ministry - I love them and I'll be around in some capacity. I just don't know what yet, but the timing is perfect and I'm ready."