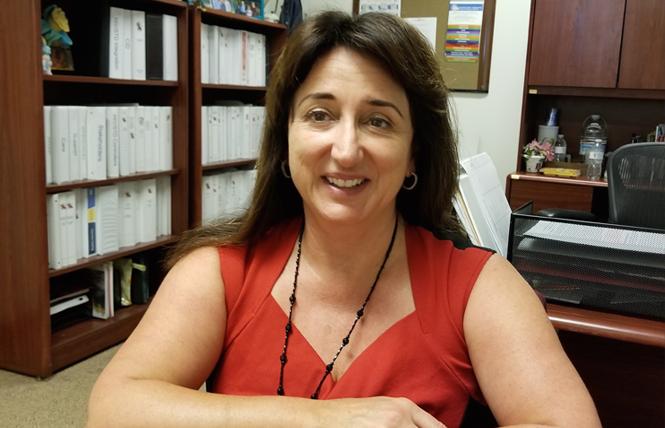 An interim chief of the Office of AIDS within the California Department of Public Health has been appointed following the departure of Dr. Karen E. Mark to work for a different state agency.

Governor Jerry Brown appointed Mark, a lesbian, to the position in 2013 after having served as the interim state AIDS office chief for 16 months. This summer Mark was named the medical director for the California Department of Health Care Services.

Succeeding her is Marisa Ramos, Ph.D., whose first day overseeing the AIDS office was July 13. She had been serving as the acting chief of the Surveillance, Research & Evaluation Branch in the Office of AIDS.

In 2007, Ramos was named chief of the Office of Refugee Health within the state health department. She completed master's and doctoral programs in biological nutrition with an emphasis in epidemiology at UC Davis, where she currently serves as a volunteer professor of public health.

In response to the Bay Area Reporter's request for an interview with Ramos, the state health department said she was unavailable. Citing the California Fair Employment and Housing Act, a spokeswoman for the state agency said she was unable to disclose Ramos' age or if she is a member of the LGBT community.

Dr. Gil F. Chavez, the state epidemiologist and deputy director for infectious diseases at the state public health agency, noted Ramos has "25 years of extensive experience in public health program management, administration, epidemiology, surveillance, and the protection of vulnerable populations" in an email announcing her appointment sent to health advocates around the state.

While Ramos is not well known within HIV prevention circles, she impressed several AIDS agency representatives that she recently met with in Sacramento to introduce herself and her goals for the AIDS office.

"I was very impressed with what she is prepared to bring to the office," said Anne Donnelly, director of health care policy at Project Inform in San Francisco. "She really seems to understand some of the issues that have been challenges for the state Office of AIDS in the near past."

Donnelly was referring to, in particular, the debacle that occurred when the AIDS office in 2016 switched contractors overseeing the state's AIDS Drug Assistance Program. As the B.A.R. detailed in several stories last year, advocates had warned about doing so and sought a delay in the change, but their concerns were ignored.

The result was many people who rely on ADAP had trouble getting access to their medication and the data for dozens of clients was breached. At a hearing held by state lawmakers last May to discuss the contracting issue, AIDS advocates called for more legislative oversight and more transparency from the Office of AIDS.

"In the past several months Karen worked very hard to create more of a partnership with the community," said Donnelly, adding that Mark's new position "is a great place for her to be. I think it will really be a good move for her."

As chief of the AIDS office, Mark had overseen the implementation in California of a statewide plan to end the transmission of HIV. She also was an advocate for the use of PrEP, the once-a-day pill shown to be effective in keeping people HIV-negative, and the expansion of needle exchange programs for intravenous drug users.

In a emailed reply to the B.A.R., the state health department said that Ramos' "highest priority" is to ensure that the Golden State remains committed to getting to zero new HIV transmissions. The department added that, "as interim chief, her main goal is to ensure that all existing Office of AIDS activities/programs continue to provide vital services without any interruption and following quality improvement principles."

She will be earning $10,633 a month as interim chief of the AIDS office.

San Francisco AIDS Foundation CEO Joe Hollendoner said the nonprofit looks forward to working with Ramos on addressing the HIV, hepatitis C, and sexually transmitted disease "epidemics surging in key populations throughout the state" in a statement to the B.A.R. this week.

"California has the opportunity to change the trajectory of these epidemics through renewed leadership and expanded funding," stated Hollendoner. "San Francisco AIDS Foundation remains committed to a strong partnership with CDPH and the Governor's Office so that achieving zero new infections and zero AIDS-related deaths is within the reach of every community across the state."