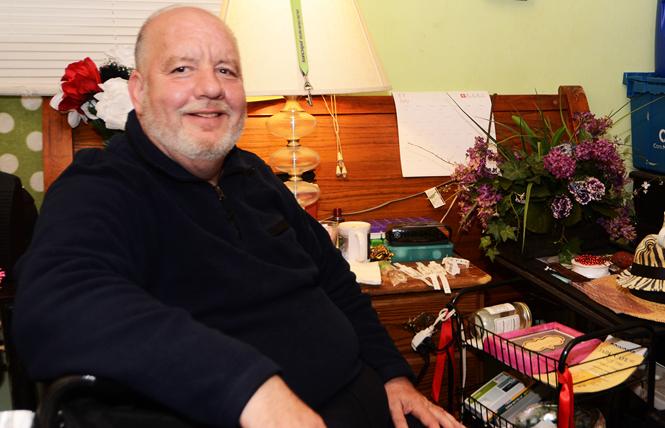 Gary Converse sits in his room at the Ellis Hotel. Photo: Rick Gerharter

A gay San Francisco man is suing the owners of the Ellis Hotel where he lives, claiming LGBT discrimination, violation of the state Unruh Civil Rights Act, and emotional distress.

Gary Converse, 54, has rented a single-room-occupancy unit from the residential hotel located north of Market Street for about seven years. He suffers from diabetes, limited mobility, and impaired vision and has used licensed caretakers or In-Home Supportive Services providers, who are paid by the state, for many years.

The lawsuit was filed in San Francisco Superior Court in April against the hotel managers and owners Ken Patel and Kelly Patel, who are not married or related. They have owned the hotel since May 2013. Defendants in the lawsuit also include the hotel's co-owners, Tarun Patel and Nayan Patel.

The complaint claims Ken Patel and Kelly Patel harassed many of Converse's caretakers, causing them to quit, have barred their entry into the hotel on several occasions, and forced one of Converse's live-in caretakers to move out.

"Kelly Patel has gone as far as holding the door shut and screaming that she needs validity," Converse said in a recent interview with the Bay Area Reporter, referring to Kelly Patel's attempt to restrict Converse's caretakers from entering his room and requesting their identification. "She refused to accept my doctors' notes."

Converse also said Kelly Patel has made derogatory comments toward the caretakers' appearance. The suit states, "Defendants have also harassed plaintiffs' caregivers based on their homosexuality or perceived homosexuality. Defendants have made statements such as "Oh, another young cute one," and, "They don't allow that in my country."

The suit also claims that Kelly Patel has used the words "faggish" and "girlish" to describe the clothes of Converse's live-in caretaker, Alberto Santos. It claims she said, "I know Alberto is gay, just look at the clothes he is wearing."

Santos lived with Converse for about a year at the Ellis Hotel and was charged $20 a day to do so and $10 every time he used the showers, the complaint claims.

"Caregivers of disabled tenants shall be exempt from visitor limitations. The owner or operator of the hotel may request medical verification or a caregiver I.D. card," the visitor policy reads.

She claimed Santos was not a live-in caretaker, but was there 12 hours a day. Visitors are not allowed to use the showers, she said.

"His caretakers were never charged visitor fees," she said in an interview. "We didn't make it difficult for them to come here. We have 50 residents and many of them have visitors."

Kelly Patel also denied that she and her husband, Rohit "Hamid" Patel, discriminate.

"Me and my husband never called anyone any names," she said. "We have tenants of all kinds, of all different types of genders."

Santos said he was advised by Converse's former attorney, Daniel Yockey, not to speak to the media.

The complaint also states that Ken Patel and Kelly Patel's actions violated the Unruh Civil Rights Act, which prohibits discrimination based on sexual orientation, among other protected classes. The law applies to all businesses in California. The lawsuit claims Converse was not given equal accommodations, privileges, or advantages at the hotel because he is gay and that he was subjected to "harassment ... invasion of privacy, [and] homosexual slurs," by the Patels.

"They've made references about me being gay to so many people and in front of people, commented on it, and made innuendos," Converse said in the interview.

Last week, Converse filed a police report for an incident in which Kelly Patel's husband, Rohit "Hamid" Patel, violently pushed open the bathroom door while Converse was inside to, as Converse said, intentionally hurt him.

In a phone interview this week, Kelly Patel denied that accusation, and said her husband pushed open the door, which was unlocked, in order to clean the restrooms.

"We are not the bad guys here," Kelly Patel said. "We have replaced Gary's mattress twice, painted his room, fixed his sink. We are in the business of providing clean and safe housing for people."

Not being able to adequately meet his care hours because of the constraints the Patels have put on his caregivers has affected his health, Converse said, including multiple emergency room visits, which the complaint claims is intentional emotional distress by the Patels.

Converse has been through five or six caregivers since the Patels took over, he said. He has now hired his neighbor to care for him about 15 hours a month, to avoid the front desk, though he said his doctor recommends he get 96 hours of care per month. Converse still also receives care from Santos and other IHSS workers.

In a court filing, Michael Heath, the attorney for Ken Patel and Kelly Patel, responded to the complaint June 27. His answers deny all of Converse's allegations and claim his complaint was not filed within the statute of limitations and that Converse breached his rental agreement.

It also claims that the Patels' conduct referred to in the complaint was not a substantial factor in Converse's health impacts.

Heath did not respond to requests for comment by press time.

Converse has also filed a complaint with the state Department of Fair Employment and Housing. The department's representatives were not able to provide information because the complaint is currently under investigation.

Alexsis Beach, a civil and human rights attorney with Alexsis C. Beach & Rachel Lederman, confirmed she is in the "nascent stages" of working on a civil lawsuit with a tenant or tenants of the Ellis Hotel though she did not say how many.

Converse ran for the District 6 seat on the Board of Supervisors in 2009 and applied unsuccessfully for a seat on the San Francisco Police Commission in 2011. He said he has filed his notice of intent with the elections department to run for mayor next year. Throughout his life he operated several cab companies in the Bay Area. Currently, due to his disability, he is not working.

Updated 10/1/18: The article was updated to indicate that Daniel Yockey is no longer Mr. Converse's attorney and that he has filed a notice of intent to run for mayor next year.