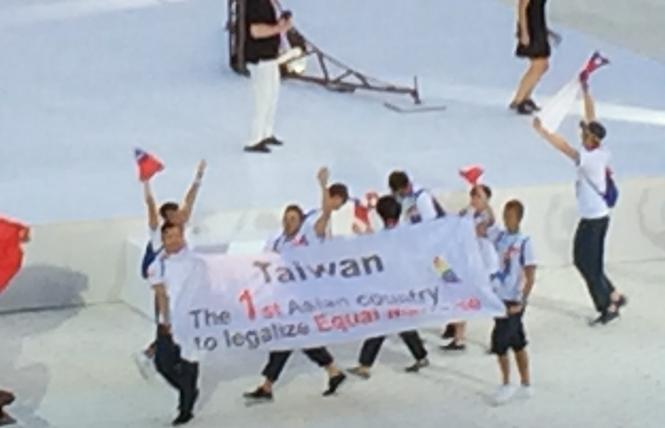 Athletes from Taiwan marched in the Gay Games opening ceremony with their banner, although they were announced as being from "Taipei, China." Photo: Roger Brigham

Here are some observations, reports, and comments from this scribe and wrestling coach who is in Paris for his fourth consecutive Gay Games.

Every Gay Games acts on two levels: the macro and the micro. The macro level is exhibited in how ceremonies, events, and tournaments are organized - and how participants react to them. At that level it is easy to dissect, praise, or critique almost any major event. In the end, the apparent flaw or virtue of anything at the macro level is most important in how it affects life at the micro level - the level at which individual athletes and artists, who pay for the privilege and experience of competing and performing at the event, interact with each other. It is at that level that the magic of the Gay Games' mission works.

At the macro level, Gay Games X got off to an uneven start. Overall, the accreditation process went very smoothly, especially if participants had received every pre-games notice and fulfilled all of the requests to make sure their registrations were complete. Not so smooth for those who had not responded to the requests or who had not received the email notifications. But compared with previous Gay Games registration processes, this one was a relative breeze.

Opening ceremonies were at a soccer stadium near the Roland-Garros tennis complex. As the masses arrived and passed through two consecutive security checkpoints, they found virtually no signage to steer them as they milled about outside seeking relief from the heat. This was especially problematic for some of the VIPs, including yours truly, who had been invited to a pre-ceremony reception to honor the Tom Waddell Award winners (Paul Oostenbrug from Albuquerque and Gert McMullin from Atlanta) and had been told the reception was in the lounge of the stadium. But several of us had not been told this involved going through a separate security checkpoint, most of the volunteers I encountered were unsure of how I could get from where I was to where I needed to be. By the time I had passed out of my security zone and through another to arrive, clothes sweated through, at the correct gate, an hour had passed since my arrival.

And then there were the ceremonies. Before 2006, most Gay Games had finished in a deep financial hole largely because of the expense of opening and closing ceremonies, on which the hosts had historically been overly optimistic in their ability to sell tickets to the event. When ticket sales were below projections, the revenue to pay for lavish displays fell short.

Gay Games VII in Chicago tightened the show up a bit and introduced a new twist, having the teams march into the stadium from two opposite gates, cutting the marching time in half and allowing the athletes and artists from far flung countries to meet and mingle - the true beginning of the micro level magic.

Neither Cologne in 2010 nor Cleveland in 2014 continued the double-entrance approach but both shortened the ceremonies considerably, which made for a more enjoyable experience.

The Paris ceremony offered a few highlights - a beautifully sung and inspiring rendition of "La Marseillaise," energized and exuberant performances by cheer groups, and entertaining tricks by a pole dance group. As expected, during the parade of athletes the delegation from Taiwan was introduced over the loudspeaker as "Taipei, China," a fictional name promulgated by the Chinese government to advance its claims over a country it has never ruled. Many athletes from around the globe had approached the Taiwanese athletes for pins, shirts, and flags to counter the mislabeling of their country. The Taiwanese themselves set the record straight by carrying their national flag and a large banner declaring they were indeed "Taiwan, the first Asian country to legalize equal marriage."

I ran into several of the Taiwan athletes as they left the stadium. They said it was important for them to be able to carry the flag of the country with which they identified and were disappointed at how they had been announced. As for the constant pressure from the Chinese government that looms over their lives, one of them told me, "We're used to it."

Shortly after the lengthy march of athletes ended, the wheels started to fall off the truck.

The stifling heat, insufficient concession staffing, "entertainment" that was numbingly slow paced, speeches that were ... well, you know, speeches - all of it led to thousands of athletes and artists pouring out of the stadium en masse in search of food, water, and relief - what Compete magazine referred to as an "Opening ceremony record for largest and fastest exodus from a stadium."

There were a few other macro issues as well. Seth Shapiro, a veteran of all 10 Gay Games and who missed being recognized at the Waddell reception because a volunteer had sent him to the wrong stadium, mentioned a road cyclist leading his race who was then directed the wrong way by a course official and lost any chance to medal. He bluntly called Gay Games X "the worst organized Gay Games ever."

Me, I wouldn't know, not having been to them all. I can say I feel that so far, organization does not seem to match up to the last three - and that is less conducive to optimal participant experience. For example, a totally unnecessary intense warm-up routine at the wrestling clinic was geared toward the elite athletes participating, not taking into account that in this inclusive group there were many aged from their 40s to their 70s, and many with physical disabilities. They already know how to warm-up their bodies. As the routine wore on in the steamy gymnasium, more and more fine wrestlers had to drop out of the group experience, excluded from participation as their health concerns arose. That alone showed deafness to the mission of inclusion and participation.

But that is at the macro level. At the micro level, the human level, the magic of that mission is so powerful it always overcomes the shortcomings of those of us who help steer the mission and the events.

A defense of Taiwan being called by a different name was that the Gay Games are not about geopolitics, and that is true - but only to a point. Medal counts by country are not kept, nor are national anthems played, outside of the host's, during the opening ceremony.

But the athletes march in to the ceremonies separated and identified by political and regional labels. During the week of competition and performance, the labels are dropped, friends from other cultures are made, contacts are exchanged, and when they enter closing ceremonies there are no labels identifying their separations. They come in in random abandon, a glorious celebration of both their commonality and their individual differences, their celebration of freedom and support so often lacking back in their homes.

More on that next week.