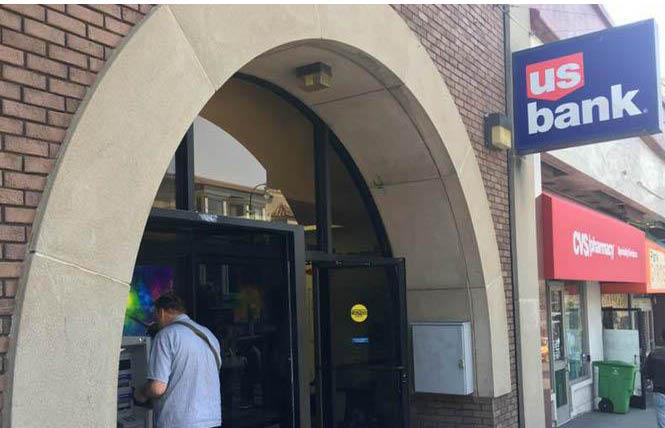 This U.S. Bank branch in the Castro was robbed Tuesday. Photo: Sari Staver

The U.S. Bank branch at 443 Castro Street, between 18th and 19th streets was robbed at 11:42 a.m. Tuesday, July 31, by a man who demanded that a teller turn over the cash in the drawer, confirmed a bank teller Wednesday.

The unidentified man who robbed the bank is still at large, according to San Francisco Police Department spokesman Officer Robert Rueca, in a telephone interview with the Bay Area Reporter.

Police would not say how much money was stolen.

According to the police, bank employees did not see any guns.

Police said they were still analyzing the crime scene.

On Friday afternoon, a uniformed security guard stationed outside the bank told the B.A.R. that her employment at the bank had "just recently" begun.

When the BAR called for a comment, the Castro branch of the U.S. Bank referred us to a spokesman at their national headquarters ,who did not return repeated calls.

Updated 8/3/18: This article was updated to include efforts to reach bank's national headquarters.