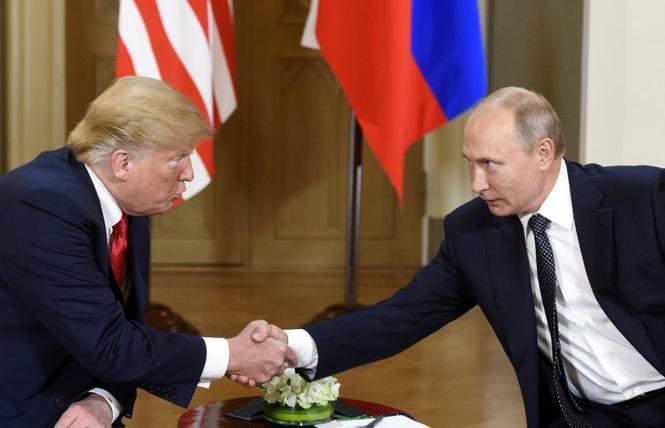 The Human Rights Campaign challenged U.S. President Donald Trump and Russian President Vladimir Putin to condemn and end the ongoing persecution of LGBT Chechens as the world leaders met for a summit in Helsinki, Finland July 16.

Leading up to the summit, HRC projected a message onto the side of the Presidential Palace where reporters were gathered for the meeting.

Reporters watched as a message played in a repeated loop on the side of the palace.

"Trump and Putin: Stop the crimes against humanity in Chechnya. Investigate LGBTQ persecution in Chechnya. Bring the perpetrators to justice. The whole world is watching. Silence is deadly. #EyesOnChechnya," it read.

In April 2017, Novaya Gazeta, an independent Russian newspaper, reported that more than 100 male residents in the Chechen Republic had been abducted, held prisoner, and tortured because of their perceived or actual sexual orientation.

In the months following the news an estimated 20 men were killed, according to Russian and global LGBT human rights leaders.

Putin and Chechen President Ramzan Kadyrov, a Putin supporter, repeatedly denied reports of LGBT persecution happening in the north caucasus for months. Kadyrov publicly stated there were no LGBT people in Chechnya, and if there were, their families would deal with them, which was widely interpreted as promoting anti-LGBT vigilantism.

Putin launched an investigation after a month of international pressure. Months passed before Putin announced a report near the end of last year that found no detainment or torture of LGBT people was happening in Chechnya.

Trump has refused to condemn the human rights violations against LGBT Chechens. He has remained silent on the issue even as LGBT Chechens who have escaped and found refuge in LGBT-friendly countries began to speak out. Members of Congress on both sides of the aisle condemned the attacks with resolutions.

Canada became the biggest supporter of the LGBT victims of Chechnya, working with the Rainbow Railroad, a Canadian-based nongovernmental organization, on resettling some of the survivors.

The move threatened Canada's relationship with Russia, as Russian officials were critical of Canada's actions.

"Trump has unconscionably turned a blind eye to some of the worst anti-LGBTQ atrocities in a generation, including monstrous attacks on gay and bisexual men in Chechnya," Cobb told the crowd, according to a news release from the organization.

"HRC is here in Helsinki to demand Donald Trump end his deafening silence, publicly condemn these Chechen crimes against humanity, and call on Putin to investigate and bring the perpetrators to justice," he continued.

Kochetkov expressed his gratefulness for supporters around the world.

"We are grateful to all people and organizations who support our work in Chechnya. International attention is essential to putting pressure on Russian authorities to take action," he said in the release. "Russian authorities deny even the mere existence of LGBT people in Chechnya, but with continued international pressure, we aim to stop the persecution, torture, and killing of LGBT people in Chechnya, and ensure that those responsible for these crimes against humanity are brought to justice."

Lampinen noted Finland's position as a global leader in LGBTI rights. He urged Finnish LGBT advocates to stand up on behalf of queer Chechens and called for Putin and Trump to learn from Finland's example.

"LGBT Chechens are being deprived of their voice, their freedom, and even their lives by state-sanctioned oppression and violence," he said. "Those of us who have a voice, particularly national governments that claim to support and defend human rights, have a moral and ethical obligation to ensure that the perpetrators are brought to justice."

Being the first openly gay person to hold the position wasn't lost on Afek.

"It's important for me to act as a role model," he said, reported the Times of Israel. "Even today, in the year 2018, we still encounter manifestations of ignorance and hatred of others. It's important to me that young men and women know that there are no glass ceilings in the IDF that limit them."

Afek is a 25-year military veteran. He served in law-related positions before being promoted as military advocate general in 2015, reported the Times of Israel.

"Nobody needs a third party to know if they are a man or a woman, a boy or a girl," Sandra Cunha, a lawmaker from the Left Bloc, argued in the parliamentary debate ahead of the vote, reported Agence France-Presse.

The new law now allows gender and name changes for individuals 16 years of age and older without a medical report with the identity disruption status.

Additionally, the law prohibits surgical procedures on intersex babies - those born with a reproductive or sexual anatomy that doesn't seem to fit the typical definitions of female or male - allowing them to choose their gender later in life.

The legislation is now heading to conservative President Marcelo Rebelo de Sousa's desk for his signature. Rebelo de Sousa, who has been supportive of a bill depathologizing gender identity, vetoed the first version of the bill adopted by parliament in mid-April. He wanted a clause requiring a medical report for minors aged 16 to 18, reported the newspaper.

The new law includes a clause focused on requiring teenagers to receive parental consent and medical approval for gender and name changes.

Advocates hailed the decision but regretted the restrictions on youth.

"We congratulate the trans community and its allies in Portugal. This law recognizes the simple fact that trans people are the ones who know best who they are. No doctor or judge can or should get to assess a person's gender identity. This also includes young people," said Richard Köhler, senior policy officer of Transgender Europe, in a July 13 statement from the organization.

"However, TGEU regrets that those younger than 16 years have no chance to get legal recognition. They are told to simply sit it out, even if legal gender recognition could make a big difference to their lives," he added. "Self-determination and recognition before the law does not know any age limit."

The Justice Ministry's Rights and Liberties Protection Department soon could receive a draft of the Life and Partnership Registration Bill for review, Pitikan Sithidej, the department's director-general, told the Nation.

He suggested the bill, which promotes equality for all genders, should fare well under the current government.

The bill was resurrected this spring, raising hopes that Thailand could become Asia's first country to pass same-sex marriage.

In 2013, a gay couple petitioned for legal recognition of their relationship and family the same as heterosexual couples.

The ministry's rights and liberties department that same year took up their petition. However, in 2014, there was a political setback.

In May, the bill was brought back to the ministry for review, but critics raised concerns about the language being "life partner" instead of "marriage," despite being granted the same rights as married heterosexual couples.

"We need to think about the role of religion, not only in terms of civil marriage but also religious marriage for same-sex couples," he said. "Should the faith be forced to perform solemnization ceremonies? How will Thailand decide this issue?"

Homosexuality isn't illegal in the country.

Buddhism is practiced by 94.5 percent of the country, according to the Central Intelligence Agency World Factbook. According to Buddhist faith, Thai people believe that homosexuality is a sign of sins from past lives, while other religions in the country, such as Muslim and Christianity, cite beliefs, sacred texts, and practices related to homosexuality.

Despite a supportive government and a belief that if all stakeholders continue to collaborate the bill will pass, Professor Amara Pongsapich, former chair of the National Human Rights Commission of Thailand, warned that political forces are still at play too. She noted that the pro-LGBT Life and Partnership Registration Bill still needed a judicial advocate.

"We still need a 'champion' from the judiciary side to push forward this movement," she told the Nation. "I have talked with several judges about this issue and I am worried."

It's uncertain when the bill is expected to go to the National Legislative Assembly, but experts speculate it will be in November. They believe legislators don't want to delay the bill, and therefore, are fast-tracking it ahead of next year's election when a new government takes office.

"We want the bill to pass and take effect soon. I want to see it in this life," Kittinun "Danny" Daramadhaj, president of the Rainbow Sky Association of Thailand, who helped draft the life partnership bill, told the magazine.