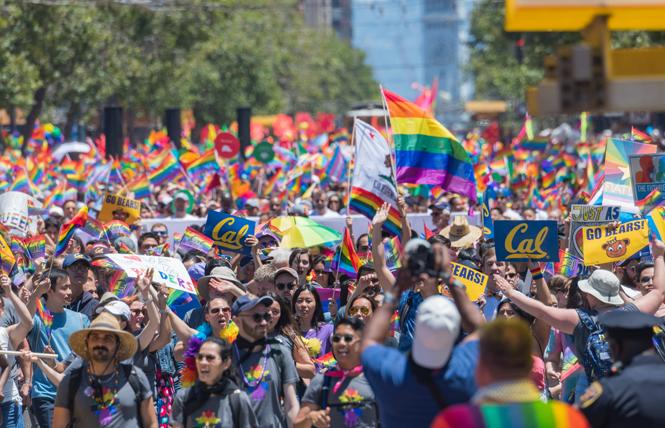 The San Francisco LGBT Pride Celebration Committee and the GLBT Historical Society have announced the launch of a multiyear partnership to highlight the historical significance of the 50th anniversary of San Francisco Pride in 2020.

The collaboration will enable the organizations to expand public awareness of the connections between understanding histories of LGBTQ people, working for LGBTQ rights in the present, and establishing LGBTQ equality in the future, a joint news release stated.

"Both Pride and the GLBT Historical Society are committed to honoring the stories of our elders, encouraging them to share the strategies they have developed in their long lives and struggle," Terry Beswick, executive director of the historical society, said in the release. "Our organizations pursue a common goal in seeking to build stronger LGBTQ communities by fostering connections between newer generations of activists and longtime organizers in our movement."

The two nonprofits will embark on a number of collaborative efforts in the two years leading up to San Francisco Pride 50. Three projects are already in the works:

- SF Pride will donate its historical archives and artifacts to the historical society, which will preserve them and make them available to researchers, historians, artists, and community members.

- The organizations will jointly launch an oral history project focused on the five-decade story of Pride in San Francisco and the wider history of LGBTQ activism in the Bay Area. The collected interviews will reside in the historical society archives.

- The historical society will curate several exhibitions about the impact of SF Pride and its place in intersectional movements for justice and equality since 1970. The main exhibition is set to open in advance of the 50th anniversary of SF Pride in June 2020.

Additionally, SF Pride has announced the themes for the next two years of the San Francisco Pride parade and celebration, both of which will expand on this year's theme, "Generations of Strength," which was created by Larry Lare Nelson.

"While 2020 sounds far away, we at SF Pride are excited and already planning," George Ridgely Jr., executive director, said in the release. "Pride is a collaborative celebration, an opportunity to honor our victories, to mobilize against current threats, and to build historical knowledge in our diverse communities."

Prospective voters can request a non-citizen voter registration form by calling the elections department at (415) 554-4375, visiting www.sfelections.org/noncitizen/voting, or going to Room 48 in City Hall, 1 Dr. Carlton B. Goodlett Place, during regular business hours.

To be eligible, non-citizens must be residents of San Francisco, at least 18 years old on Election Day, and parents, legal guardians, or caregivers of children under the age of 19 who also reside in San Francisco. Those who are imprisoned or on parole for conviction of a felony, or currently found by a court to be mentally incompetent to vote, are not eligible.

The deadline to register to vote in the November 6 election is October 22.

The opportunity for eligible non-citizens to vote for members of the San Francisco Board of Education stems from the November 2016 election, when city voters passed Proposition N, Non-Citizen Voting in School Board Elections, by a vote of 54 percent to 46 percent.

Over 400 LGBTQ APIs are expected to attend the conference, the theme of which is "Growing Home." Attendees will hear from international speakers and participate in more than 100 workshops on an array of topics such as racial justice, immigrants' rights, LGBTQ equality, trans justice, philanthropy, religious acceptance, and youth organizing.

Sammie Ablaza Wells, executive director of API Equality - Northern California, which is the local host of the conference, said the event provides an opportunity to break down "assumptions" and get to the "root of who we are and what we want to see in the world."

"The conference is a good opportunity for us, for people of similar identities, to actually understand not just what our similarities are, but also what our differences are," Ablaza Wills, 23, who identifies as queer and nonbinary, said.

Nil-Quartelai Quartey, a senior adviser and national LGBT liaison for AARP, said that he appreciates the safe space the conference allows for queer API leaders.

Quartey, a gay man, will be presenting results from AARP's most recent studies that include information about LGBT seniors.

The conference will take place at the Hilton San Francisco Financial District, in Chinatown, 750 Kearny Street. Registration ranges from $150 for limited income/students to $350 for corporate/government.

SFMTA Photo has 20,000 digitized images of city street views, architecture, and transit, including streetcars, cable cars, buses, and infrastructure, all with searchable keywords. The collections go back to 1903 and include the 1906 earthquake and fires.

For more information, visit www.sfmta.com/photo. For image use inquiries and questions, email sfmtaphoto@sfmta.com.

Organizers said they decided to hold the event after hearing from young people and seniors that they wanted to make connections across LGBTQ generations.
RSVPs are encouraged but not required. Lunch will be served and attendees are asked to bring a dish to share.

The Identity Project will be present to take portraits and discuss how people label their gender and sexuality.

Woods to speak at Commonwealth Club
Tiffany Woods, program manager of the TransVision program at Tri-City Health Center in Fremont, will speak on trans health and mental health in the age of President Donald Trump Monday, July 30, at the Commonwealth Club, 110 the Embarcadero in San Francisco.

Woods will be speaking as part of the club's psychology members forum, and is only the second trans person to do so. (The club has long had LGBT speakers at its other forums.)

Woods will be speaking about being on the front lines at a local community clinic at a time when trans rights are increasingly under threat from the Trump administration.

Admission is free for club members, $20 for nonmembers, and $7 for students. For tickets and more information, visit https://www.commonwealthclub.org/ and click on "Events."