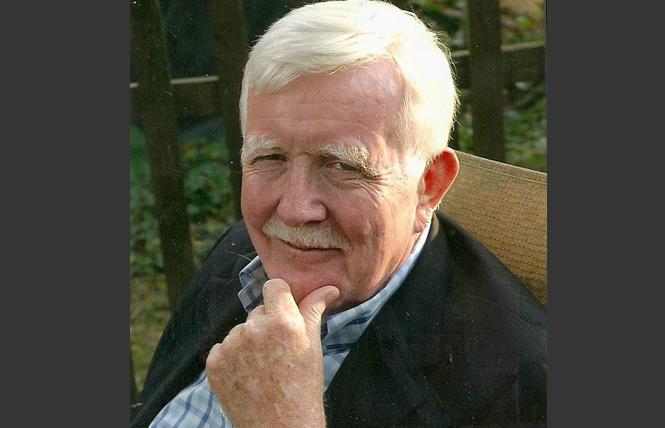 Tom Gallagher, the country's first openly gay Foreign Service officer who was forced to quit because of his sexual orientation but was later reinstated, died July 8 in Tinton Falls, New Jersey. He was 77.

The cause of death was complications from a staph infection, his husband, Amin Dulgumoni, told the Bay Area Reporter in a phone interview.

"He was a wonderful man," Dulgumoni said. "He helped people. He was a caring man."

In 1975, Mr. Gallagher was assigned acting U.S. consul general in Guayaquil, Ecuador. He was 34 and the youngest chief of a major American diplomatic mission in modern U.S. history, he wrote in an obituary he prepared before his death. That same year, he came out as a gay man at a conference organized by the Gay Activist Alliance of Washington, D.C. His coming out forced him to resign from the State Department, he wrote.

Mr. Gallagher was reinstated in 1994, when President Bill Clinton lifted the policy of formal discrimination against gay Foreign Service officers. Upon his return, he was first assigned to the U.S. Embassy in Madrid, he wrote.

Dulgumoni said that Mr. Gallagher was previously married to a woman when he heard about the Stonewall riots in New York City in 1969. He decided that it was time to be himself, Dulgumoni recalled.

Jacqui Shine, who last month wrote a profile about Mr. Gallagher that was published on Slate, marveled at the history of his life.

"He was as astonished as anyone by the extraordinary turns his life took, and humbled by, and grateful for, all he experienced - and he had friends from all over the world and all parts of his life," Shine wrote in an email.

California years
After Mr. Gallagher was forced to leave the State Department, he moved to California to pursue a career as a social worker. According to his obituary, he worked as an emergency room social worker at the UCLA hospital in Los Angeles. And volunteered at what was then called the Gay Community Service Center (now the LA LGBT Center).

He then moved to northern California and became a social work supervisor for the Travelers Aid Society of San Francisco, where he developed the first counseling program for children in the Tenderloin.

In 1980, Mr. Gallagher became director of Napa County's psychiatric emergency program. He also did work in San Francisco during the early years of the AIDS epidemic.

Early life
Mr. Gallagher was born September 11, 1940 in Manhattan, the son of Thomas Sr. and Mary Josephine Murphy Gallagher. He graduated from Holy Spirit School in Asbury Park, New Jersey. He received his bachelor's degree from Monmouth University in 1962, and his master's degree in social work from the University of Southern California.

Heather Mistretta, who wrote about Mr. Gallagher for Monmouth magazine, said he "was a dichotomy in the best way."

"He was a gentle and kind man with a wonderfully wry sense of humor, but his unwavering courage compelled him to crash through boundaries that never should have been there in the first place," she wrote in an email. "Tom's dichotomous life was full but always had room for one more person who might need his help or a hand to lead the way."

According to his obituary, Mr. Gallagher entered the first Peace Corps group to go to Ethiopia. He was assigned to the small town of Agordot in Eritrea, and was an early supporter of the province's war for independence (which was finally achieved in 1991).

"He was still in touch with students he taught in Eritrea in 1961," Shine said.

He returned to the U.S. and began his first salaried job at the White House, where he worked in the early days of the Johnson administration's War on Poverty. His obituary states that he wrote the first anti-poverty grants for San Francisco; Dayton, Ohio; and Leslie County, Kentucky, which was the poorest county in the U.S.

Mr. Gallagher joined the Foreign Service in 1965. His first assignment was to Jidda, Saudi Arabia, where he was mentored by Ambassador Herman Fr. Eilts. Mr. Gallagher planned the evacuation of the American community from western Saudi Arabia during the June War in 1967, and was chosen by Eilts to be one of the last 10 Americans to remain in the Middle East during that war.

After his reinstatement, Mr. Gallagher followed his assignment to Madrid with other diplomatic posts. He was appointed country officer for Eritrea and Sudan in the State Department's Office of East African Affairs. In 1998, he negotiated a truce between the Nuer and Dinka tribes in southern Sudan who were threatening to go to war. Seventeen years later, that war did break out.

Mr. Gallagher led the State Department's efforts to destroy Joseph Kony's Lords Resistance Army, which abducted 30,000 children into slavery and killed 200,000 people in Uganda and Sudan. According to his obituary, Mr. Gallagher also led the U.S. delegation to a conference in the Hague of 15 donor nations that raised $1.5 billion in food and aid for more than a million Sudanese in the war-torn region.

In 1999, Mr. Gallagher was transferred to the U.S. Embassy in Brussels as head of the visa section. His obituary noted that his proudest accomplishment was the refusal of a visa to a radical young Moroccan who wanted to return to his studies in mosquito spraying at the flight school in Opa Laka, Florida in September 2001. The CIA had publicly announced its concern that al-Qaida was planning to spray poison on an American city. That event did not happen.

Mr. Gallagher later returned to the U.S. for other assignments. His final tour at the State Department was at the Office of International Health, where he served as regional adviser for Europe for a worldwide anti-AIDS program.

After retiring in 2005, Mr. Gallagher continued to do brief tours for the State Department, serving at 17 embassies and consulates on five continents.

Mr. Gallagher received many honors over the years, including from the Foundation for AIDS Research (now known as amfAR); Monmouth University, Distinguished Alumnus of the Year; and NJ Pride, Trailblazer Award.

In 2016, the assistant secretary of state for security affairs publicly apologized to Mr. Gallagher for the fact that he had been forced to give up his career 40 years earlier.
"He will always be my hero," Dulgumoni said.

In addition to his husband, Mr. Gallagher is survived by his former wife, Carolyn Worrell, who is now a judge in Nevada.

At his bequest, Mr. Gallagher's body was donated for research and education to the Mercer County Community College in New Jersey. Memorial services are being planned at the DACOR Bacon House in Washington, D.C., in September and at Monmouth University.